A question about tents

Hey there.
Been trying to pitch this tent I have for the past couple days.
The short of it is basically, I cannot pitch this tent at all.
I’ve tried getting my dad to help, but he knows its for LARP and therefore refuses to help. (He doesn’t realy approve.)
Anyway, my question is, will there be anyone on-site availible to help pitch a tent in the OOC area?
Thanks.

Any chance of a picture? We might be able to help if we know what kind of design it is.

I may be able to help onsite but I can’t promise until closer to the event as my plans sometimes go astray at the last minute.

Ah, I can get a picture in a little while.
Also, don’t worry, as I won’t be coming to THIS event, but the next one.

If you know what it’s supposed to look like and just need someone to hold a pole for a few minutes you can probably just find someone when you pitch it, larpers are generally friendly as long as they’re not in a rush to be somewhere!

but a picture would help! 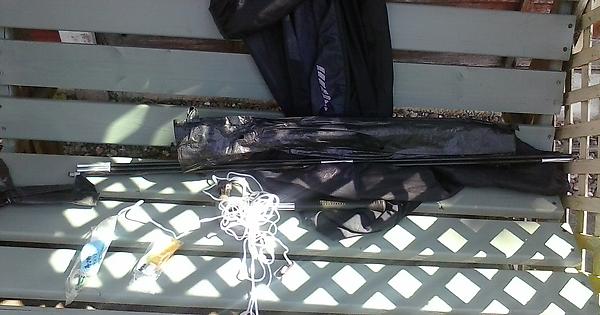 Here’s an album with a bunch of images.

The circular holes in the corners, the poles should stick into the inner one. And be threaded through a tunnel in the fabric across the tent. In the end it should be two half circles in an x-shaped dome.

OK, I can’t quite read the name label on the bag, but it looks like a dome, possibly with another pole going over the entrance.

What are you having problems with?

In most cases for these sort of tents you’ll have 2 poles the same length, and one shorter, the shorter is the one for the front. So take the 2 longer and thread them through the sleeves on the tent, which are probably along the line of the colour change, and cross over in the middle. They will be too long while the tent is flat so leave some pole sticking out each corner. You should then find on each bottom corner of the tent a tag or ring with either a pin or a reinforced hole and the end of the pole goes to that tag (pin goes in the end of the pole, or end of pole goes in the hole depending on type.) Once one end is in, go do the opposite end, pulling the canvas and pushing back on the pole so that the pole makes an arc and the tent goes up. Repeat with other pole ends.

If the above works you should be able to see what to do with the 3rd pole if there is one, and it should look vaguely tent like already.

Once last pole is in, peg down the corners and you should be there.

Just spent a little while trying to put it up, and I think I’ve found out what’s wrong.
As you can (maybe) see in the pictures, my back yard is stone with pebbles in the centre, so I can’t really pitch it.
I think I’ve got the hang of putting it up mostly, just gonna have to try and pitch it when I get there in autumn, I suppose.

Thanks for the advice everyone, you all really helped!

You could also probably carry that to a local park and try pitching it there. As long as you explain to anyone complaining that it’s just for practice, you should be fine.

But I heartily recccomend some practice pitching and striking it before you try doing so while flustered and anxious in a filed full of strangers, maybe in the rain and ankle-deep mud (extreme case)

I second that, I’ve seen people turn up and either had things missing or my favorite discovered it had a huge hole in it. Also try Youtube.

That’s a shame your dad won’t help you - he prefers you go cold? Anyways moving on…

Don’t be quiet ask around on the field people will help you especially if you offer to assist them as well - IE: help with Thier big ass IC tent

Seconding what some others have said, once you’re at an event if you still find yourself struggling, do ask for help. Larpers are almost unfailingly an incredibly friendly bunch and I’m constantly amazed at how eager people can be to help others out.

Alright, I’ll keep the advice in mind.
I really do hope people are as friendly as you say! ^-^.

LARPers are generally fairly friendly, Empire gamers even more so. On the one hand, it’s a niche hobby, so it’s “us against the world!” (pick a world, any world…)

On the other hand, it’s a fun game which you’d like people to have fun in with you. I will be your friend, maybe you will join my group and we can play the game together!

And on the gripping hand*… it’s a friendly, PvE game, with a lot of investment and drama. X is my friend. Will they invite me to their fire for drinks and tales? Will they give me a good deal on that thing? Will they stand beside me in the battle-line? Will they charge into the fray and shield me with their body while I scramble to safety? Whatever happens… it makes a good game

*(if you get this reference, have a geek point)

If you are seen to be struggling, people will tend to step in and help - we’re all there for the same thing after all, and one good turn deserves another

Hi .
I went to my first Empire event in June and camped in the OC field. Everyone was very friendly and said hello, I saw some people struggling with their tents and other people helped them out so don’t be afraid to ask if you need it.
As others have said, it looks like a simple dome tent with built-in groundsheet so should be simple to set up in the future after you’ve done it once.
Just make sure you bring the tent, poles, guy ropes and lots of pegs. If the ropes arent already attached, you may need to bring scissors or a pen knife if it’s currently all one piece of string.
You’ll have a great time.

At the very worst, If there is a problem and you tent is knackered, PD can possibly help, or some one in your nation could offer to find space for you. Like said above, we are all friendly and understand that it happens.