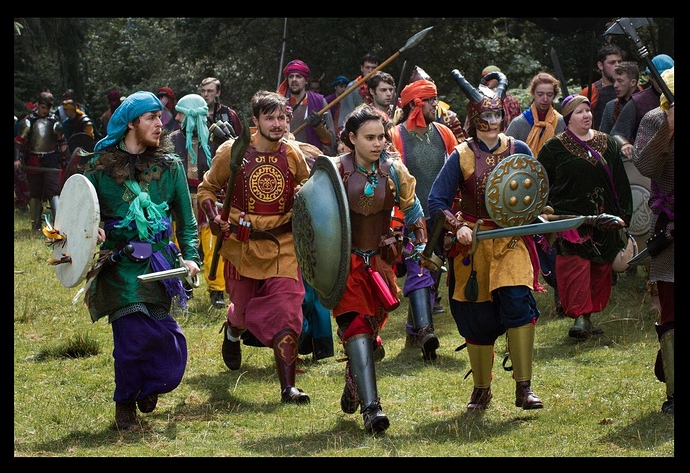 Supported by more than fifty independent fleet captains, flushed with it’s victory over the Grendel forces left behind in Redoubt, anticipating the first opportunity for all the Freeborn forces to be in the same campaign, the Freeborn Storm sails east to Spiral. They spread out, taking a wide formation, if the Grendel are acting to support their armies, then the Storm will catch them while they are engaged on land and harry their ships all the way back to Dubhtraig. With superior tactics and daring the Freeborn can overcome the Grendel superior numbers!

The wiley Grendel are a match for them and more though. Perhaps someone tipped them off - perhaps they simply don’t care about their armies fighting in Spiral. Whatever the reason the navy meets the Grendel armada coming in the opposite direction - all formed up for a full on [[naval engagement. It is clear they intend to challenge the Storm head on and with the Freeborn vessels dispersed they have a massive advantage.

They meet in the waters south of Ateri, and the Grendel attack mercilessly. Their superior formation alone places the Freeborn Storm at a serious disadvantage. The independent fleet captains of the Empire more than double the strength of the Freeborn Storm, but they are still outnumbered by the Grendel navies. Yet the numerical disadvantage is less than it was last time they clashed - the Grendel navies have not emerged unscathed from their various battles with the Empire, nor have they been untouched by the storms raised by Imperial magicians.

Still the Empire is outmatched and outnumbered, and the Grendel crews are more experienced at ship-to-ship combat on such a scale. The Empire’s warships are powerful, but they are slower to react to the ebb and flow of the sea battle than their orc opposite numbers. It is a blessing that the Grendel navies still appear to consist primarily of warships - if the Grendel had brought a contingent of their own independent captains with them then the Empire would be in even more serious trouble.

As the battle progresses it soon becomes clear that the Grendel ships possess the same unnerving ability to coordinate their attacks demonstrated time and again by the orc forces on land. They seem to have a natural, instinctive awareness of where their fellow vessels are and where they are going that goes beyond anything even the most experienced captains might manage. They seem to know exactly when to break off, and precisely where the Imperial ships are at their most vulnerable.

Thousands of lives are lost, dozens of ships captured, sunk, or burnt to the waterline - on both sides. The Grendel do not have things entirely their own way - but the Empire loses three times as many vessels as the Grendel do. Without the presence of the independent captains - every nation save Varushka is represented - the situation would have been significantly more one-sided. Easily half the Grendel ships lost are sunk by independent captains, able to respond more quickly to the changing situation that the navy itself . Those same ships are more adept at avoiding Grendel counter-attacks - so the Grendel concentrate their attacks on the navy instead - focussing all the casualties there.

In the end the Freeborn Storm is - again - forced to retreat.west back into Redoubt. The Grendel harry their retreat, sinking several more vessels. Over the next weeks, the Freeborn storm is pushed further west, forced back time and again by the orc ships. The pattern is the same in each engagement - the orcs outnumber and outmaneuver the Imperial ships, and inflict three-times as many losses as the Empire manages to inflict on the Grendel.

As the Autumn Equinox approaches, the Freeborn Storm has been pushed back to Rebekah’s Leap … where the Imperial and orc navies first clashed, last year.

You can as always read the text in a neater format here → https://www.profounddecisions.co.uk/empire-wiki/381YE_Autumn_Equinox_winds_of_war#Another_Round_.28Bay_of_Catazaar.29

The gist is that the Freeborn storm encounters a Grendel armada coming the other way, and ends up in a major naval confrontation in western Spiral and then across the sea off the coast of Redoubt as they are pushed back.

The photo is by Beth again, and shows the Freborn off to do something very serious to some people who deserve it.