I was just wondering if anyone on the field IC has ever done something particularly legendary. If so, then I can regain people about the “Heroic tale of [Insert-Name-Here] as a metaphor for [Something-Important]”. It’d also be interesting to read about the sort of coolio stuff people get up to on the field.

Legendary stuff on the field of play? Oh, there have been a few…

There was a Marcher General who ordered (or at any rate, took responsibility for) the unleashing of dread magics to scour the Mournwold, and walked into the Wicker Man for it, and was burned one summer eve before his people…

There was Yael, who told a beautiful lie that divided the Empire for months, turned brother against brother, and was eventually beheaded…

There was the entire Skarskind campaign, as an Empire went from “we have no idea what we’re doing” to “We have all the parts in the right place and are now unstoppable”. And the follow-up, when Skarskind was given as a gift to the Imperial Orcs.

There was the time when the Druj turned up to sign a peace treaty, and were NOT ripped limb from bloody limb by Dawn and Highguard… (that was a legendary test of restraint, I can tell you. I was there, a Dawnish noble having to hold back the Highbourn…)

There have been the battlefield legends, such as the war-rhino, the husks of Wierwater, the Eater of Hope, the Dragon of Reikos, the reclamation of Overton, the shield-ring of Wintermark, and many many MANY more…

Empire has many legends. What sort do you seek? Which one is yours?

Wow… awesome. I’ve read of old Yael and her Land Without Tears before. Isn’t it weird how the religion created at Empire seems very different to the major world religions? No heaven, pride is a virtue, that sort of thing. And what the hell is a war rhino XD. Thanks for sharing.

Not so much. I think of it as a militant Buddhism.

As for the War Rhino, this was PD’s first experiment with large beasts on the battlefield…: 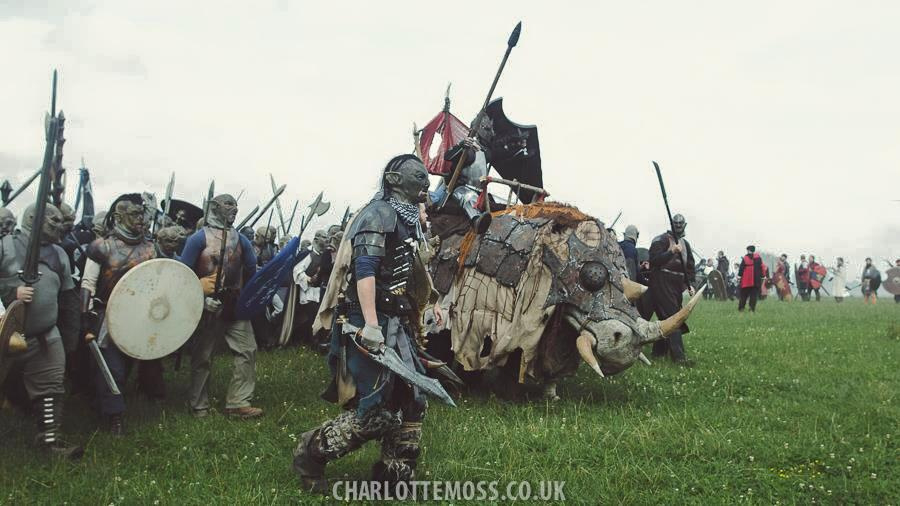 With heavy infantry guarding it’s flanks, that thing stomped it’s way around the battlefield breaking up every Imperial formation in it’s path, and handed the PCs their first unequivocal defeat…

Yeah, I’ve frequently refered to the Way as Action Buddhism OC. ‘Your path to Nirvana is through action’

And we don’t say there is no Heaven, doctrine is that we simply can not know what lies beyond the Labyrinth,

That said most the Legends in play should be found out IC, there’s a lot of game for an Urizeni Torchbearer or a Highborn Archivist to go around to the various nations and groups to get these stories, and then record them as appropriate (and have big arguments with other collectors over whose version is best.) but there are certainly Urizeni stories like The Ritual on the Black Plateau, The Obliteration of the Unnamed Spire and others.

Ah ok, Coolio. That looks like a nasty war rhino to have to fight.

How does the rino work from an OC perspective? Is it several people under a rino shaped covering? How does it know where to steer? What happens when the rider dies?

I remember the war rhino! Or a war rhino at least. My Boyar stuck a spear up its bum. Come ask around Varushka and I’m sure he’ll spin you a mighty tale about it!

That, and the Grendel land sharks that followed, were a wooden frame with a nice covering layer. The rider sat braced in a saddle slot on top, and several strong folk moved it about from the inside by lifting the frame and stepping slowly together.

So the rider was able to shout down orders to the “crew” inside, and steer, slowly, that way.

It took a lot of hitting to kill it, and it was functionally immune to various effects (REPEL, CLEAVE, etc). What happened when the rider died? I have no idea. I’ve never actually fought close to one of those things, on either side.

Also appearing on the battlefield at one point or another…
Land Sharks (sleeker, greyer, better dressed versions of the above. Up to three at once)
An eight-foot tall four-armed bronze collossus (using paired greatswords)
Drakes (small humanoid dragons, a mere 7 foot tall)
Lobstrocks (that’s what we called them, they were giant lobster beasts)
Dryads (venomous, bark and lichen covered, not nice)
Trigoni (4 armed eyeless attack monsters)
Ogres (massiveley powerful humanoids that like eating people)
Marsh Walkers (10 foot tall, tentacled, breathing VENOM and WEAKNESS)
Dragon, once, to our horror. It was the size of a bus, and ate several PCs. Luckily, it was really lazy
I think there was some sort of troll thing at one point… wide stumpy thing with very long arms…?
Thule Husks (classic zombies)
Wendigo’s Husks (fast zombies…)
Vallorn Husks (plant zombies)

…and that’s not even starting on the Heralds (from Siakha’s Sharks to the Knights of Eleonaris) or the Vallorn Beasties (are you scared of bugs? Available in medium, large, and OMFG)…

I am glad I play in Dawn, whose attitude to ALL of the above is “That’ll look great on the trophy wall, it’s mine…!”

EDIT: And the Ice Giant. It turned up to a tournament on Anvil field, but was unsafe (OOC and perhaps IC) for use in battle. Luckily…

Wow, that’s a lotta monsters. Just in case you needed a reminder of the fantasy theme, somebody shouting “the land sharks are coming!” should do the trick.

Before the treaty with the Thule they brought a Giant (10" ish) Ice Golem/Troll/Thing to fight in the Dawnish Glory Square.

And in one memorable encounter, a huge stone creature rumoured to be a herald of some kind turned up to a Jotun skirmish. The players, assuming it was on the barbarians’ side, beat a hasty retreat back through the portal, then watched as the Jotun had an epic, and ultimately successful battle against the colossus.

Awesome. Why was the herald helping the Empire?

It wasn’t. But it wasn’t helping the Jotun either. Someone on the field may know more about what its actual motivations were.

EDIT: This was a single skirmish ~ a year ago tho, so not so much a legend as “a cool thing that happened what I saw”

Oh and ents. 10 foot tall Walking trees topped with an animal skull. Long flail like limbs of strike down and death!

How did PD make all this stuff in game XD?

Go on a skirmish and find out!*

*WARNING: May be fatal

How did PD make all this stuff in game XD?

They are good friends with Mandala

Ask around Navarr for the Hero of Broceliande…hes 7ft tall and shoots arrows of fire. Killed a Herald last event…so the story goes.