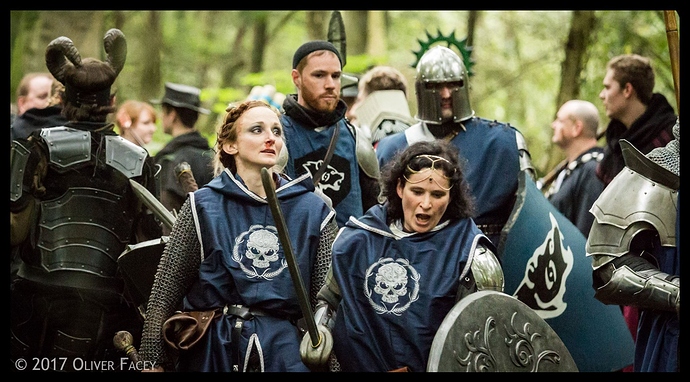 The Civil Service have detected four major conjunctions of the Sentinel Gate during the Spring Equinox. Each provides an opportunity for the heroes of the Empire to influence the direction of one of the ongoing campaigns against the barbarian orcs.

Prognosticator Atraxes has noted that three of these conjunctions are fluid and not fixed to a specific day. This means that the gate can be opened on either Saturday or Sunday, but not both. The fourth conjunction can only be used on Sunday, should the Military Council wish to make use of it.

The first conjunction is to the site of Lerrovac’s Camp, in Murderdale, in the Barrens. The area contains a significant number of Imperial prisoners, held at the mercy of a powerful Druj Tepel and a major force of orc warriors.

A second conjunction will allow travel to the Spring Hills, in Sermersuaq. Located above the hot springs of Tiniki, a large Jotun force is resting there, gathering their strength for the coming season.

A third portal offers an opportunity to reach a Summer regio on the Westerhal Trail, West Marsh, Kallavesa. The raiding parties that have spent the last year maintaining the Jotun presence in Kallavesa have begun to gather there, potentially with the intention of beginning to solidify their hold over the West Marsh region.

The final conjunction, available only on Sunday, allows the heroes of Anvil to visit the Gethern Expanse in Screed, Spiral. A force of elite Grendel mercenaries are heading towards this location, although what they intend to do when they get there is not known at this time.

By the time of the Spring Equinox summit, the Civil Service will have completed reports for each of these conjunctions, which will be presented the the generals during the Muster. The final decision about which major conjunctions to exploit, and who will take part in the battles, is the heavy responsibility of the Imperial Military Council alone.

A further quartet of large conjunctions have been identified early on Saturday evening of the Spring Equinox. Two open portals in East Floes, Sermersuaq close to the location of engagements against drowned dead during the Winter Solstice. The second pair of conjunctions allow passage to the final two Spring Regio known to exist in West Ranging, Liathaven.

Imperial prognosticators are also preparing additional information relating to a number of smaller conjunctions over the course of the summit that will be of relevance to the Military Council, individuals from the various nations, and other parties. A summary of the identified conjunctions will be provided nearer the summit, with additional details passed to national egregores and civil servants of the Military Council.

(Our Battle Team intend to run two large skirmishes aimed at Wintermark, and two aimed at the nations whose armies are engaged in Liathaven - Navarr and the Marches. They will take place on Saturday between 17:00 and 19:00. To ensure these encounters run as intended we are opening up monstering to any player who wishes to help out. We will provide additional details on the nature of the skirmishes, the exact times, and kit requirements as part of the Winds of Fortune.)

Details of the Major Conjunctions (the battle opportunities) and four large conjunctions (what are colloquially known as skirmishes).

As always, choosing which of the major conjunctions to explore is the hard task of the Military Council during the musteer on Friday night. I obviously don’t need to remind people that we’d prefer you not to discuss them on facebook and save the arguments and politics for the field.

As always, there’ll be significantly more information available once players hit the field in terms of scouting reports and Civil Service assessments of the opportunities and the like.

As always you can read about the major conjunctions on the main wiki here → https://www.profounddecisions.co.uk/empire-wiki/382YE_Spring_Equinox_winds_of_war#Assured_Destruction_.28Major_Conjunctions.29

It might also be worth looking over https://www.profounddecisions.co.uk/empire-wiki/Sentinel_Gate which talks about what the Sentinel Gate is and roughly how it works.

Photo is by Oliver Facey.