++Battles and the Gate++ 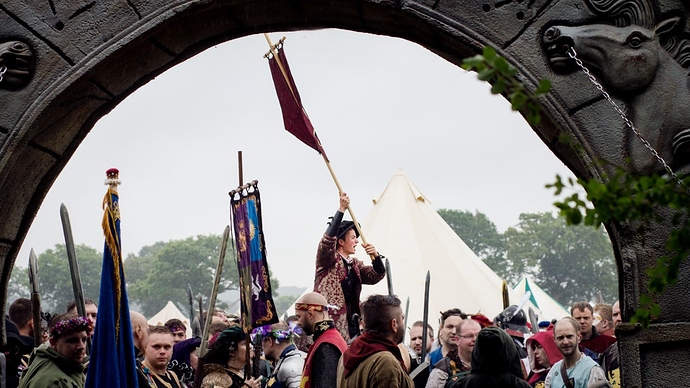 Winter is a time when we review parts of the game and look at what we think is working fine, or not working as intended. One of the areas we’re looking at at the moment is monstering. It’s part of the rules of Empire that if you play a battle then you crew a battle. We have a really substantial skirmish team these days, around 80 at most events, which lets us run cool encounters and skirmishes without any need for support. But it’s simply not possible to have a battle against six hundred orcs unless five hundred players volunteer to play them.

Unfortunately we’ve had an ongoing problem getting everyone to follow the rules. We know somewhere close to 90% of people playing Empire follow the rules scrupulously, but regrettably the 10% that aren’t are causing significant problems. As an example, at the last event, there was a roughly one-hundred person disparity between the number of people playing the Saturday battle, and the number turning up to monster the Sunday battle. That makes the battle less enjoyable for everyone taking part - and it’s not fair for the overwhelming majority of our players for a handful to let everyone else down in this way.

The best way to start addressing this problem is to get good figures for each nation playing the battle. Once we have an accurate breakdown of the number of people playing and monstering from each nation then we’ll publish those figures after each event. With that information we’ll be able to identify which nations, are playing but not monstering and handle that accordingly. We’re confident that it’s only one or two nations where the majority aren’t following the rules - but having accurate data will make that clear.

We’re still discussing the precise details, but the plan for next year is that each nation will go through the Sentinel Gate separately and be counted through by refs. Players whose characters arrive too late to get through the gate with their own nation will need to wait until the end - once every nation that is fighting has gone through the gate the stragglers will be able to follow through and be added to their nations’ numbers. This’ll change the dynamic of the battles a little, and we’re still exploring exactly what we’re going to have to do in-character to make this happen. But it will mean that we have accurate figures for playing and volunteering.

The alternatives that we’ve looked at such as battle tokens for volunteers have been discussed in detail but for now we’re not prepared to go quite that far. Our hope is that this step will be allow us to tackle the problem without too much burdensome administration.

Finally, we’ll also be asking the generals to stop giving us their estimates of their numbers. Some of these estimates are so wildly out that it makes it impossible to use any of the figures produced that way. Given that we don’t want them, and they are burdensome for the players to collect, there is no point at all in generals trying to count or estimate their numbers. The logistics of how many people turn up for a battle is ultimately an out-of-character issue so it’s better for us to collect that information ourselves.

I’m assuming you have considered it, but… how will this affect mercenaries? Two dozen Leaguers marching in the Urizen block (for example) could make a huge difference to the attendance figures. If they slack off, they’re hurting Urizen, not the League.

On the other hand, asking them to march with the other League characters (even as a ‘merc’ block) is going to affect logistics when the block then splits into a number of groups who now have to track down their respective clients.

As long as there is a break between the nation you have sworn to, then you , then the next nation it should work. Just telll the ref who you are.

Hopefully this new method may help sort out the chaos that is muster that sometimes happens.

The muster area will have to be arranged so that nations can form up effectively. That means forming up along the main highguard thoroughfare or somewhere else. Alot of nations just roll up to the gate. We can organise this better imho. But is it an IC question to be raised in the MC rather than discussing it on here?

From responses on the Facebook post, I gather the mercenaries will be counted separately for both battling and monstering. It may be a case of counting Urizen and then their mercenaries (a group for which PD will already have estimates of the numbers), followed by the next Nation and any mercs they have.

Mercenaries are already counted as their actual nation when it comes to monstering.