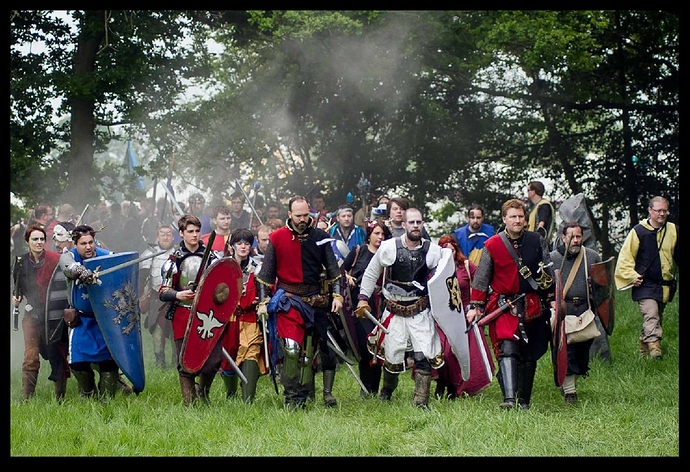 The Golden Sun launch an overwhelming assault against the abominable unliving forces in Weirwater. They do not fight alone. Over forty independent captains fight alongside the Dawnish army - primarily Dawnish knights and yeomen, but a number of League soldiers and Wintermark warriors have also heard the call to defend Weirwater.

The Imperial armies are further reinforced by a grand cohort of knights from the Fields of Glory - some three thousand glorious and terrible warriors of the Summer Realm, called from the demesne of Eleonaris by the combined might of the enchanters and witches of Dawn, to oppose the flesh-devouring husks inhabited by fell Winter spirits. Beneath gilded crimson banners. tall lords and ladies armoured in polished golden plate march alongside the warriors of Dawn, Wintermark, and the League. The Empire has seen the Knights of Glory before, but there is something different about these fae warriors. They are more gregarious, less arrogant… less bitter. There is a sense of true nobility about them that has been lacking before. They engage in courteous words with the Imperial soldiers they accompany. When the armies camp, the knights arrange their own pavilions of cloth-of-ruby-and-gold … but once the tents are erected they send cordial parties to visit the camps of the Golden Sun, sometimes bearing gifts of fine wine and exotic foodstuffs. They act like allies of choice, rather than creatures bound by oaths to fight alongside anyone who calls them forth.

And fight they do. The abominable invaders have slowly been driven north and east by the Golden Sun. Outnumbered perhaps three to one, they make up for their lack of numbers with supernatural tenacity - and with their unnatural ability to replace their fallen by inhabiting fresh corpses. Rather than a single great army, they split into multiple smaller groups, forcing the Golden Sun to likewise divide its forces. For the most part they seek to avoid pitched battles, preferring to try and prey on the yeofolk of Weirwater - because when they do stand and fight. they are utterly outmatched by the Imperial forces…

In the first month after the Summer Solstice, there are major engagements at Applefel and the Weirwater Vales. The abhorrent husks try desperately to overwhelm the defenders, forcing their way past barricades and pallisades to try and slaughter the yeofolk intent on adding more corpses to their Winter host. In both cases, however, they are thwarted by a combination of the yeofolk’s refusal to stop fighting, and by the glorious bravery of the local noble houses. They keep the unliving pinned down long enough for forces from the Golden Sun to arrive and catch them against the walls of the very communities they seek to annhilate.

The last great engagement takes place at the rich port-town town of Culwich. The remaining husks have come together in a single host, rampaging through the farms and villages around the oldest Dawnish settlement. Again, though, they are thwarted by the nobles and the yeofolk. Larger communities bar their gates and fight tooth-and-nail against the undying attackers. Smaller communities, given sufficient warning, band together at defensible locations, or retreat in good order to Culwich. A valiant troubadour brings together several groups of knight’s errant and, with the aid of a circle of Weavers, creates a makeshift fortification amid the ruins of the Sentinel’s Folly - the shattered tower overlooking Culwich - which offers sanctuary to fleeing farmers and fisherfolk alike. The pattern of glorious heroism is repeated over and over again as the unliving advance. The people of Weirwater will not bow before this unnatural horde - and they know that the Golden Sun are coming.

In the end, the final battle before the Autumn Equinox takes place amid the broken ruins of the farms outside Culwich. The entire Imperial host draws up, and with grim commitment falls on the abominations. Committed to victory at any cost, the glorious warriors of Dawn strike straight to the heart of their enemy, charging en masse across the blighted farmland, flanked by the Golden Host of Eleonaris. The fighting is brutal, even tragic - by this time the majority of the Winter spirits are inhabiting the bodies of fallen Dawnishfolk, still wearing the armour and wielding the weapons with which they died fighting the unliving.

As night falls - the starless night with only a sliver-thin moon - the people of Culwich light great beacons along their walls. Skilled yeofolk archers, master hunters, launch burning arrows into the oil soaked thatch of farmhouses near the wall, creating roaring bonfires. The polished armour and shields of the Golden Sun and the Knights of Glory catch this light and reflect it back; and for one vital hour it is as if the sun has never set. The burning buildings serve as a convenient way to dispose of abominations; still fighting, many are forced back into the conflagrations and burned to ash. It is a tragedy, that the bodies of Dawnish men and women who fell in glorious battle receive no proper burial, and some troubadours weep openly when they hear of it.

Unable to use the darkness to their advantage, the unliving begin to break. They retreat again from Culwich, north toward Karov. Even with the ability of the Winter sprits to take new corpses, their numbers are greatly depleted. Rough estimates suggest that there are only around two-and-a-half thousand remaining creatures in Weirwater - although not all of these are unliving husks. Soldiers recount engagements with dreadful creatures and even the occasional gang of living warriors among the host - servants of fell powers that have cast their lot in with the monsters ravaging Weirwater.

Despite their allies, the invaders are defeated - for now. The overwhelming commitment to victory shown by the Golden Sun, the strength of their allies both magical and mundane, and the glory of the people of Weirwater have all contributed to this victory - but the war is not yet over.

You can read this Wind of War here → https://www.profounddecisions.co.uk/empire-wiki/381YE_Autumn_Equinox_winds_of_war#Cold_Day_in_the_Sun_.28Weirwater.29

To summarize: The unliving host has been driven across Weirwater by the Golden Sun and their allies. The enemy have been soundly defeated, and seriously weakened by the season of battle.

Weirwater itself is not unscathed, but for the most part the Golden Sun has been able to prevent the smaller communities being overrun.

Not all the husks now at large in Weirwater are part of the main force. Several smaller gangs are still at large in the territory. They’re mostly just a nuisance, but they are more than capable of destroying a small noble estate or slaughtering families of yeofolk farmers - or to keep knights-errant busy for several seasons.