I design props! Some Photoshop, some visual arts, a lot of writing.

I can do all of these things! Hooray!

I’ll work with you to establish what you need, to talk through the details and make sure to produce you something 100% authentic. You can check the notes on any of the pictures I’ve uploaded to see some design decisions I made when producing them.

I’m still not quite used to pricing - we’ll talk. However, I need to be clear: I’m talking pounds sterling here. This is an OOC commission, not an IC one.

You can see pictures and notes at this link (I hope): 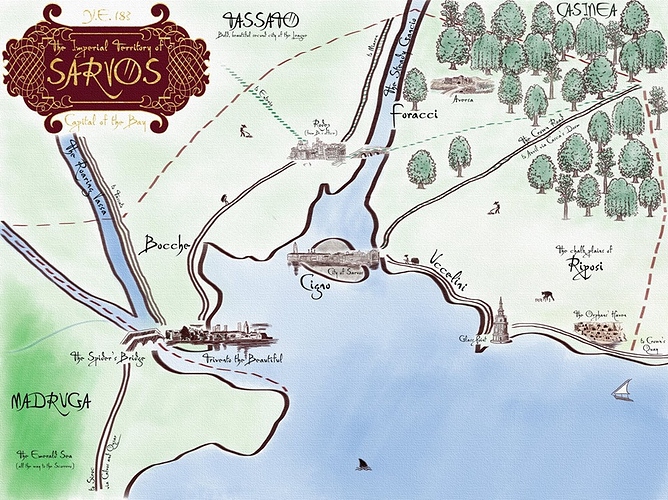 Probably my greatest bit of Photoshop for the game to date, this historical map of Sarvos went out onto the Anvil field for sale at E3-2018. It’s entirely done in Photoshop, including the watercolour effects, the canvas texture and the scruffy-gold coloration on the writing in the capital. 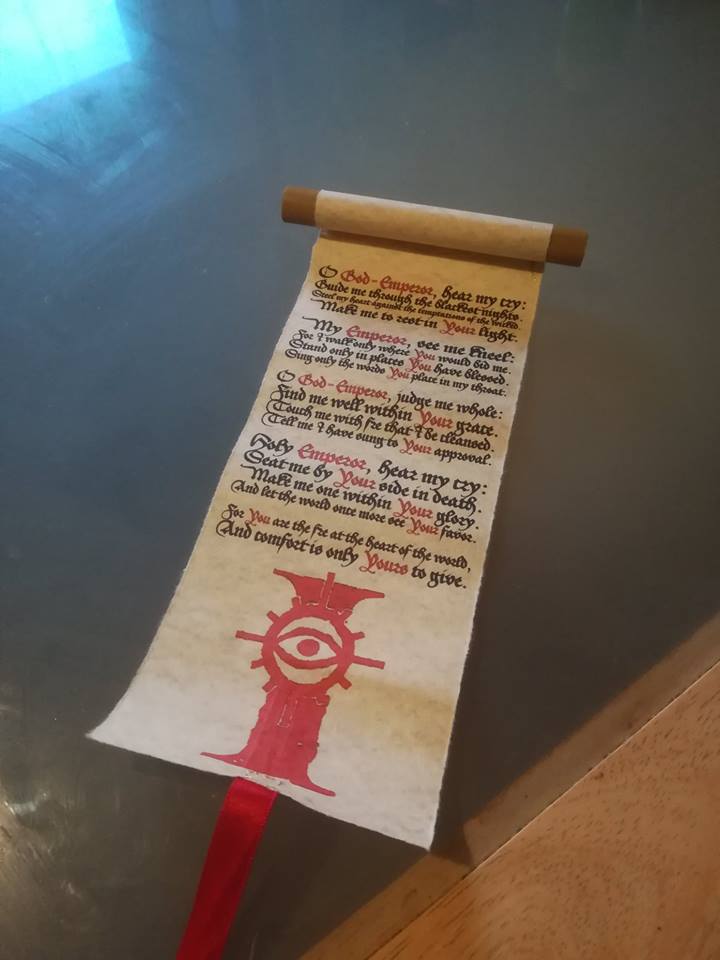 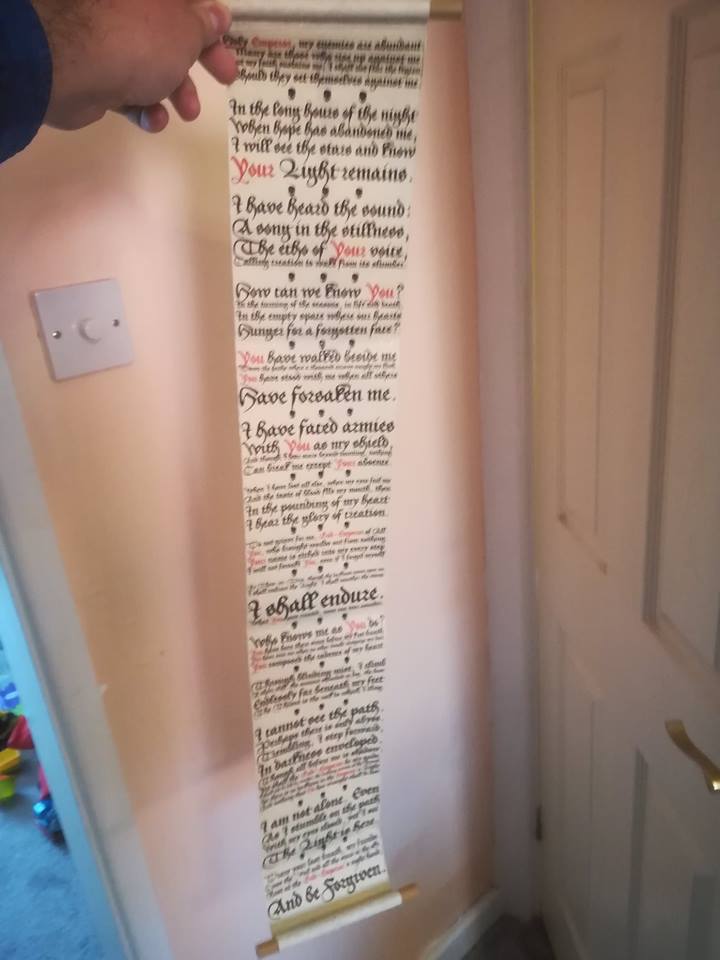 Recently, I produced these two scrolls on commission for Death Unto Darkness, a LARP set in the Imperium of Man from the Warhammer 40,000 setting.

The first is meant to represent a purity seal, but being 1) brand-new rather than old and war-torn, 2) on paper rather than fabric, and 3) full of a psyker’s prayer for guidance against the dangers of the Warp, it’s obviously not a traditional purity seal. And that’s the point: each of these decisions was made with a mind to telling you something about the character bearing it.

The second represents a long prayer-document for public reading or private meditation. Being on two rollers and around a metre long, it could hang comfortably from an 8’ Space Marine’s belt… but not a regular human’s.

An early-game poster for a “Pride Expedition”, bringing the songs of Urizen to the field of Anvil. You may recognise future General Nicassia of the Citadel Guard here. She doesn’t have time to go round singing in everyone’s camp anymore.

Fonts chosen to look believably like they might belong to a medieval typeset as produced by a nation of Mountain Elves, surrounded with one-too-many flourishes because PRIDE!

The sketch of Nicassia herself is by Claire Sheridan. 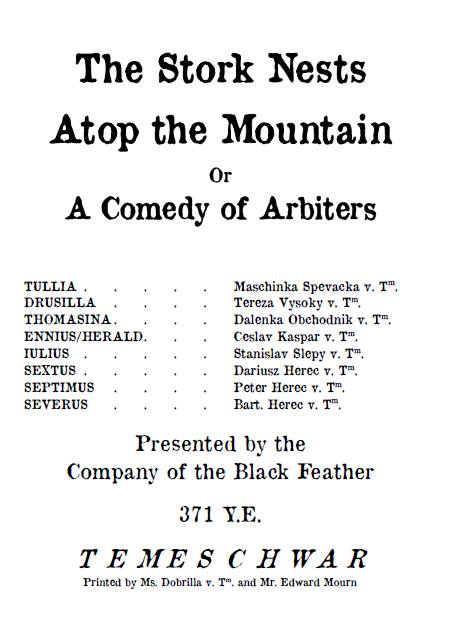 I wrote a 12,000-word iambic pentameter play once for Empire. It’s filthy and I’m quite proud of it. It’s not visually very interesting but it’s 12,000 words of Cod Shakespeare, leave me alone. 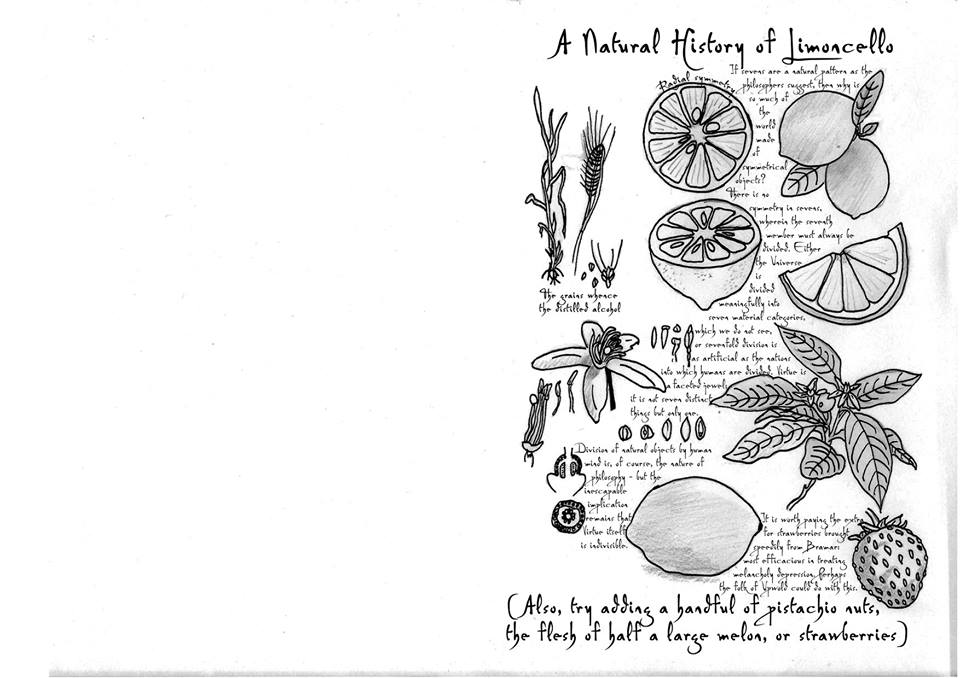 Aheh, excuse the left side of the page, it contained Plot.

This is half a diary page from a prop which never ended up being used. Most of the images are sketch copies from life or other images - hand-drawn art is not my forte - but I’d like to draw your attention to the text. I do religion, I do philosophy, and I do recipe notes: if you want me to help flesh out your single or group backstory with fascinating documentation, I can do that. 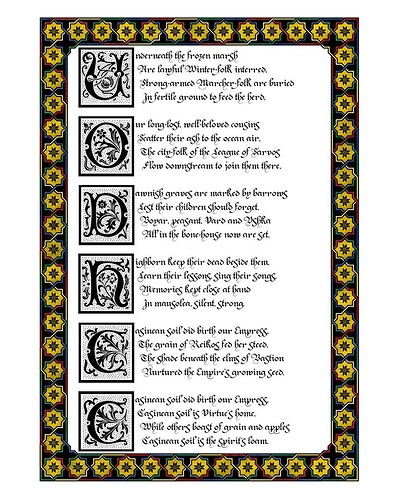 I wish I’d taken a picture of this with the finished illuminated capitals.

This Highborn-supremacist poem about death and corpse disposal was produced as a reward for achieving some plot objectives in Year 1 or 2 of Empire, I forget. 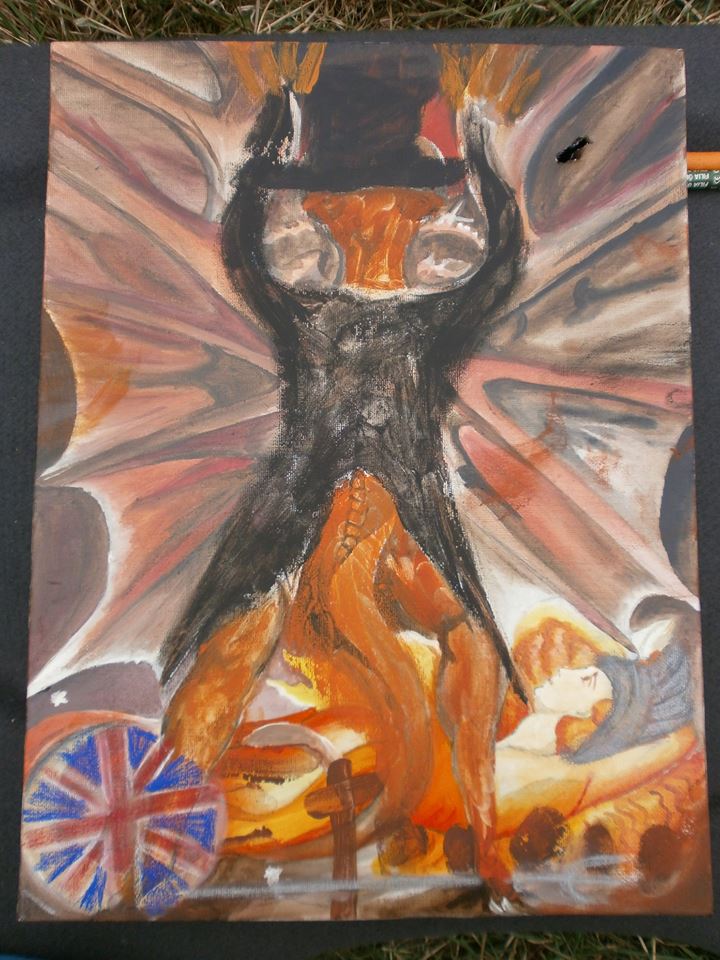 The Great Red Fox And Britannia Clothed In The Sun.

I didn’t paint this, but the concept is mine. Following the collapse of human civilisation and its overthrow by the animals in the early-10s short-run LARP Winter In The Willows, some naughty Foxes (think “aristocrat neanderthal vampires”) set about desecrating some of mankind’s greatest artworks.

Thus, the overthrow of Britannia by the animals is represented by a crude over-painting of the original Blake “The Great Red Dragon And The Woman Clothed In The Sun”, with finger-painted blood graveyard, crossbow-bolt-hole, and crude overpainting.

And yes, I made my artist (Claire Sheridan) paint an imitation Great Red Dragon first, and then we varnished it, and then we did the top layer. It would have been recoverable with effort. 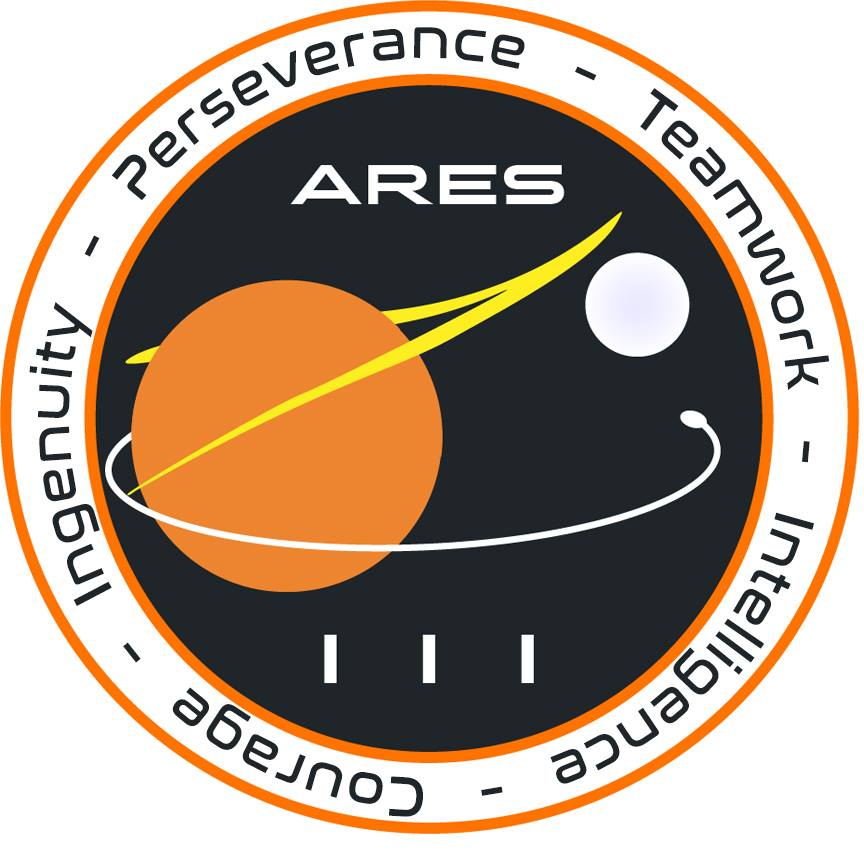 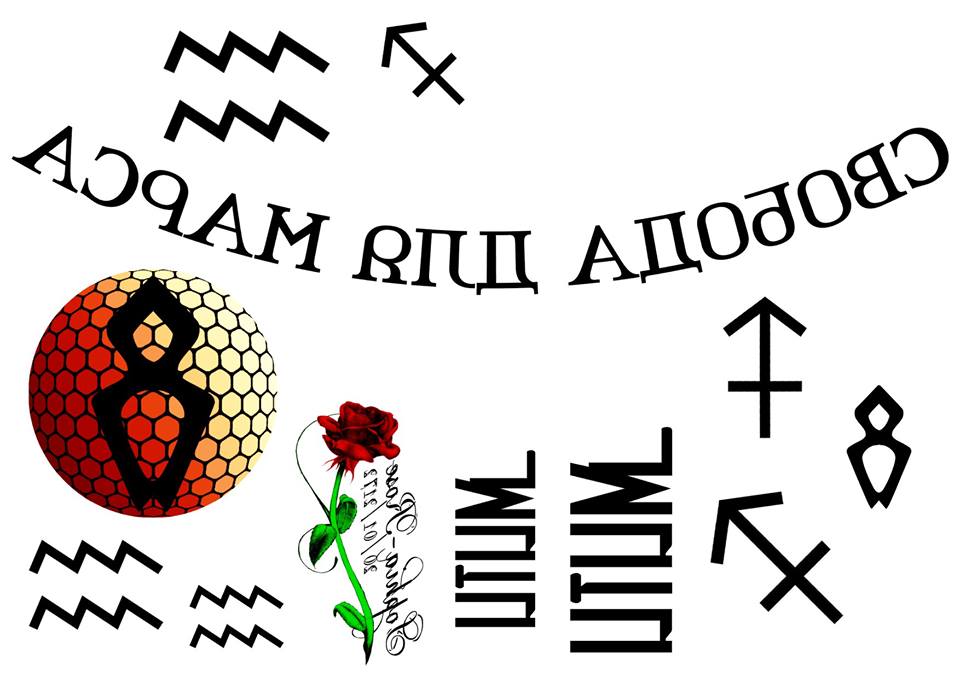 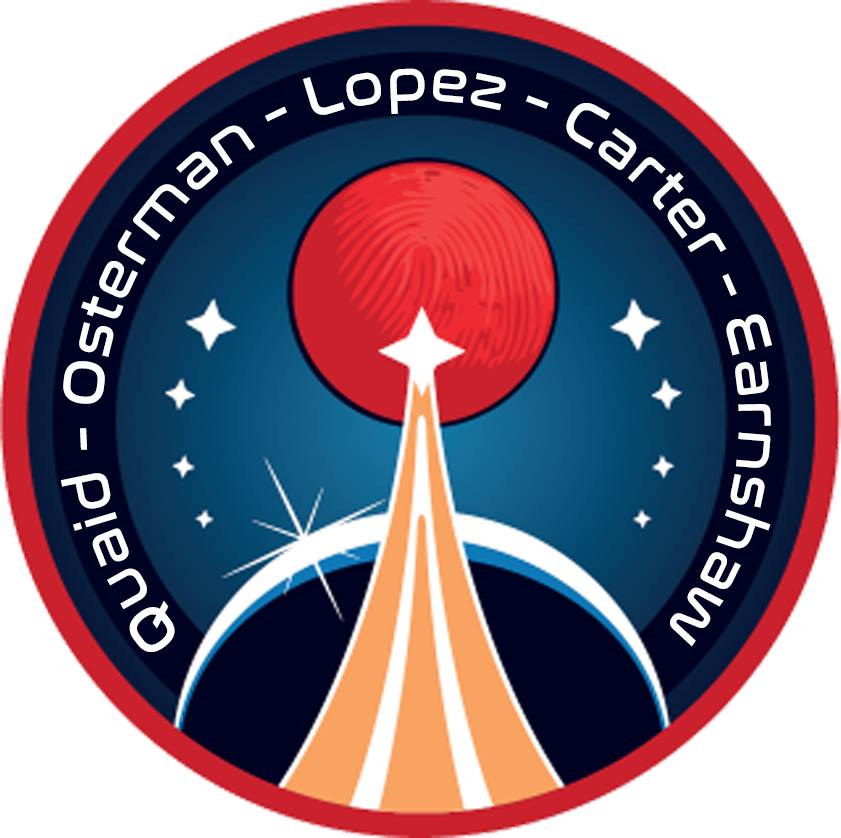 The Incarceration game-setting featured a partially-colonised Mars, so my Martian patriot character bore tattoos with historical reminders, as well as gang and trade-union tattoos (reversed, whoops).

Using the Ares III mission badge as a base (yes, the mission from The Martian), I edited the badge to detail the Martian Virtues, and concocted little vignettes which I figured a political leader would tell to inspire people.

Using the Mars One logo as a base, I nicked four characters from literature about Mars to supply the names for a NASA-style mission badge, and one real possible Martian - my good friend Hannah Earnshaw, a Mars One candidate.

This is an Empire piece, once was quite tight plot but has moved on several steps since this was used.

This was the seal on the inside of a box locked with a very powerful custom Night enchantment. Inspiration from real goetic magic, but featuring more outright writing of prayer-like imprecations and less symbolism. Designed in Photoshop, text in Photoshop, the rest executed largely in pen.

From PD’s previous big game, Maelstrom, this is a slave-soldier’s contract - which I printed ON ACTUAL PAPYRUS.

Heavily inspired by Islamic (specifically mameluk-era) styling, much like the group we belonged to, I actually wrote both halves of the text on this in consultation with the player.

The contract is designed to be comprehensive - a believable document - and I consulted with historical sources for this.

The text filling it in is mostly fluff, but contains subtle, sinister hints as to the nature of the nation the slave belonged to (“Manner of Enslavement: Congenital Criminality”).

They all look very detailed and it is obvious that you put a lot of time into your work. For now I personally don’t need anything but maybe in the future I will when I come close to the end of my character’s story. I will have to wait and see.