Contest - The Art of Champions!

Following wrangling of schedules, re-naming and all that sort of thing, we have the final details for our combat/performance contest. Queries can be directed to me (Bea).

A spectacle and a showcase of the finest warriors in the Empire! Come one and all to marvel at the skill and prowess of our fighting women and men!

Open to all comers, this is no mere tourney: strength, the length of your weapon or heroics alone will do you no good! Entrants are judged on their ability to win over the audience - flair, style and imagination are your greatest weapons here!

Do you think you have the panache and daring to step into the ring before our panel of judges? Bring your opponent forward and entertain us all - the person judged most impressive, heedless of their victory or loss, will win the acclaim (and a healthy prize pot) of a true Champion.

Judges from every nation will vote for those that most impress them - choose your style carefully for international appeal!

Starting at the sixth hour past noon on the Saturday of the Summer Solstice, in the Glory Square of the Dawnish encampment.

Spectators more than welcome! Refreshments will be available nearby.

10 rings entry per person. Groups welcome. Opponents are permitted to rehearse their bouts in advance. The Judges’ decision is final. The Champion will win one half of the entries total, and the runner up will receive one quarter - the more that enter, the greater the prize! 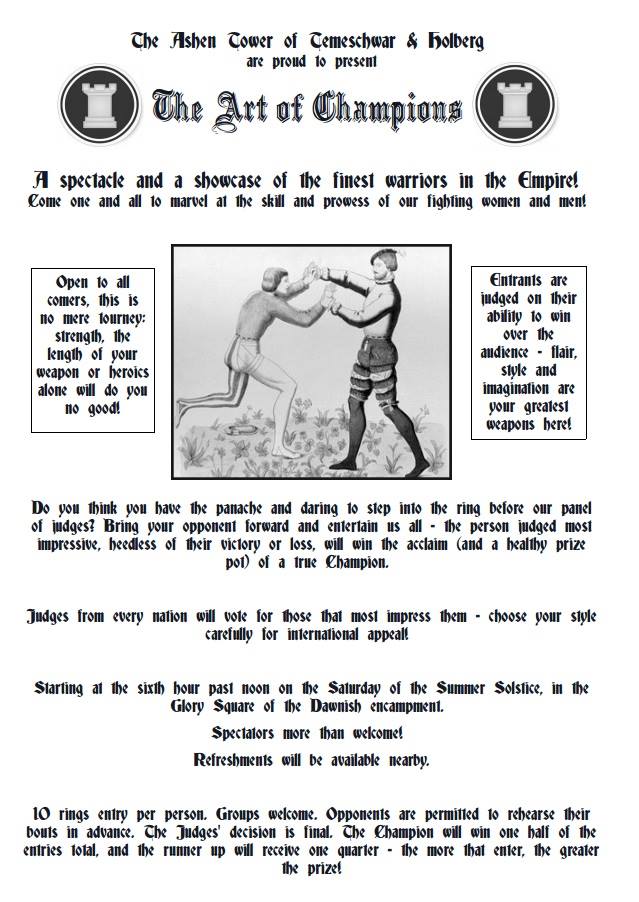 The sunmer realm tourney is starting in the dawnish glory square at 3, is there going to be enough time for that to finish and the combatants to recover since it sounds like you’ve got significant overlap in terms of combatants and audience.

Yes. There’s three hours between the two contests, which is plenty of time, especially as the Cathan Canae fights only involve one person from each nation. We have arranged this in negotiation with Dawn and PD.

Should be alright as the Cathan Canae thing is limited to one champion per nation, this one allows everyone else to join in.