Not entirely sure this is the right place to post this but here goes.
I’m going to throw together a costume diary for my first ever LARP character; Qamut Keeluting, a Suaq Grimnir/Scout type. Hopefully the diary will help to motivate my efforts and garner some advice from those with more Larping experience than I.

I’m still building Qamut’s background, along with the costume, but a rough history of the character is that he is the youngest son of one of many Grimnir serving in a predominantly Suaq hall. Though his father hoped Qamut would follow a Grimnir skein, teaching him the basics of the herbalist, the healers son sought a more obvious sort of glory and joined the ranks of the scouts and trappers. Currently Qamut is travelling from hall to hall, offering his services as a tracker and a medicine-man, seeking to earn a warriors name on the battlefront.

So to start things off here’s what I’ve prepared as the base of the costume: 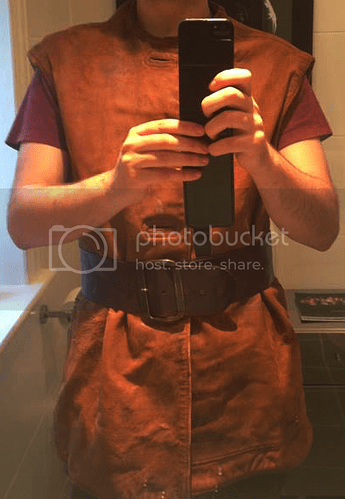 Okay so this is an old leather jerkin type thing I had lying around with the biggest ass belt I could find, I’m thinking it’s an okay start but I’m planning on covering it in a bunch of different layers. 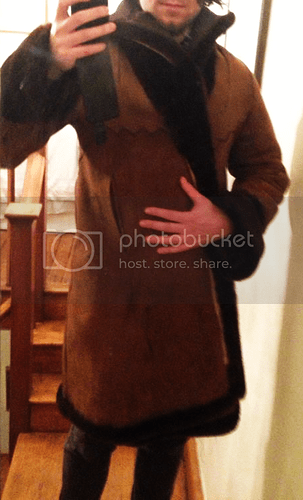 And this is my grandmothers old fur coat that I have turned inside out and removed the lining, as per instructed in this handy how-to: profounddecisions.co.uk/empire-wiki/How_to_-_Make_a_Suaq_Coat 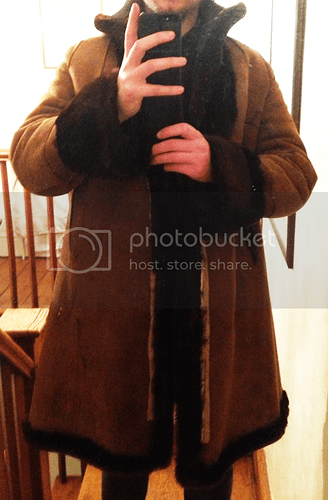 And finally another shot of the coat without it being held open.

Obviously there’s a lot of work that needs to be done, as well as a lot of additional costume to acquire.
The plan, with the coat at least, is to add a few buttons in order to keep it closed and tight, as well as adorning the trim with some kind of pattern.

Anyway let me know what you guys think, comments and criticisms are more than welcome.
Hopefully, with any luck, more will come soon.

Off to a good solid start there I’d say, looking forward to what comes next. You had any thoughts about accessories, belts, sashes, pouches, charms, teeth, bones and other dangly bits you can hang off things?

Hey Mark, thanks for the reply.

I’ve been holding onto a child’s ammo-belt for quite a while now which I’m considering sewing to my chunky-belt and filling with scrolls, potion bottles and all manner of charms and fetishes. My only concern is that it might be too recognizable as an ammo-belt and break the look of the costume. What do you guys think? 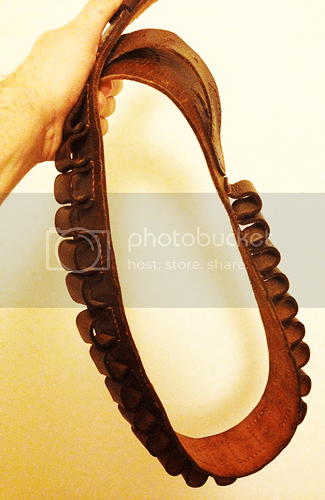 In regards to other dangly bits I’m definitely going to go with some kind of medicine bag and a wineskin as well as perhaps sewing a few pouches onto my belt or even the coat itself. I also have a rack of antlers that I’m desperate to fit in somehow, so if I figure out a way to incorporate them into the costume I could hang some talismans from them with raggedy bits of cloth and string. I’ll post a pic of the antlers in the next post, anyone got any great ideas on how to wear them in a safe and unhindering fashion?

This is a great foundation!

Regarding the ammo belt, it would be too conspicuous to use wholesale, but have you considered cutting it up and making smaller, ‘potion hangars’ out of it? It’s really no big deal to find leather belts in charity shops for a reasonable price, hack them up and form belt loops, stitch them together and you have yourself something that no one would ever suspect was once a bandolier.

If you wanted to avoid destroying it though…there might be a way of threading something through it to make it decorative? You could use it to add a bit of colour to your getup, with trollen braid or something? Maybe?

I’m no costumier I should mention. Just a scavenger.

Ta for the compliment Ataraxia!
That’s a good point about the belt, I think you’re probably right about it standing out. Definitely needs some work.
I’m thinking that, rather than remove some loops to attach to other belts, I might separate just a few to fit a couple of pouches or trophies on to it.
Hopefully that will break the bandolier vibe.

As an update, here’s what the costume is looking like so far; 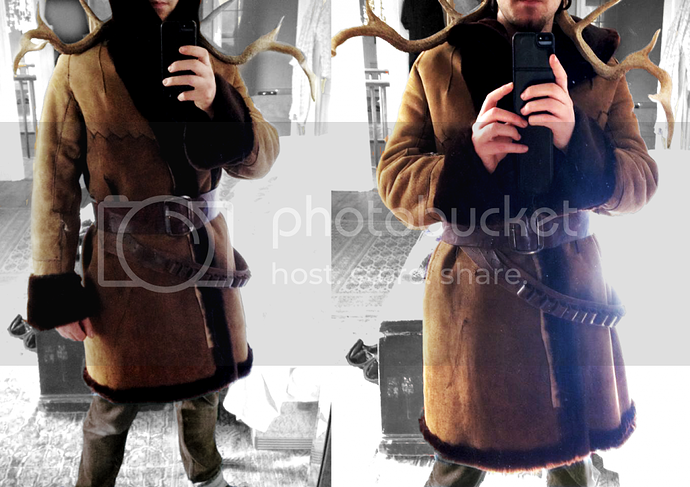 I tried wearing the leather jerkin beneath the coat but it’s incredibly toasty and bulky as is, so I think that will have to become part of my “Summer Suaq” look, or perhaps for just relaxing in the evening.

Currently the antlers are simply resting on my shoulders. I’d love to include them somehow in the costume, but I think they will have to remain decorative and taken off before combat or scouting. If anyone has any excellent suggestions then I’d love to hear them!

Also I will put up some decent photos, taken by someone other than myself with a half decent camera, when the costume is more complete, so apologies for the awful quality in the mean time.

Looks really good, and you know what, with the bandolier at a jaunty angle like that it doesn’t look so out of place either. I think if you had it over your shoulder or around the waist as a cowboy would, it would be instantly recogniseable, but with some potion bottles in that will look really good.

Keep hold of the jerkin. The summer events differ vastly from the winter ones and you’ll be grateful for something that’s relatively warm in the evening where the temperature drops sharply. It’ll also be a decent ‘indoors’ wear or might even form part of your battle garb depending on how you want to take the field (if at all, plenty of characters stay away from battles but I’d urge you to try it, its a rare experience!)

Have you considered painting or stitching runes onto the larger panels of the coat? Not necessary of course, but if you wanted to add a little something more going on with it that’s always an idea.