I’ve never attended an event, and I’m planning on being a purely magical healer. Obviously, one of the tools I’ll want to have is a woundbinder wand, and I’m not really a fan of holding an actual wand in my hands.

Is it possible to inlay a wand into a bracer or something similar, and achieve the same effect with your palms instead of the wand itself?

Obviously, you’d have battlemage as well, but I really like that idea.

Part of that rule as per Ricohard’s post is that your patient also needs to know what is happening to them. Without the wand or other implement the other player won’t be sure what healing you have given them, as laying on hands and chanting at them is a legitimate way to do the chirurgeon skill, which takes longer for less HP.

Can we ask why would you have an issue with holding a wand? Safety is not an problem. as you are banned from bringing non LARP-safe (i.e wooden) wands onto the battlefield. If it’s something like RL pacifism or discomfort around holding even simulated weapons, I suggest thinking of it like a bonesaw or a scalpel. Theoretically your PC could hurt someone with it, but it’s there as a tool.

Wands are Implements. An Implement is used for fast, simple magic. Often this is attack magic, but you can also swift-cast all the standard spells to make them work faster, at the cost of extra mana.

This is PD’s official weapons safety page. If you’re new to LRP it’s a good explanation of how a LRP-safe wand is made. The tl:dr is “it’s a foam and rubber stick with a solid core. Don’t poke people or hit them to hard with it”. For what it’s worth, they tend to cost in the region of £35 to buy, less if you buy a coreless one on account of not wanting to fight with it.

@CharlieP : No, Chirugeon takes 30s, the same as for the Heal Spell. I’ve not had any problems with this before, as “mystic chirugery” is the exception rather than the rule. It’s far more likely you’d want to disambiguate with “get up on one hit” when you’re the rare case of “30s of stuff that looks like Heal but is not”

I don’t have much of an issue with it per se, I just thought it’d be a fun idea to have it that way. However, you’re right, it can’t be used as a wand if its not an actual implement. I’ve found some lovely looking ones online for around 30 quid and honestly, I’m excited to use them. Thanks everyone!

Do you have the wiki link for non LARP safe impliments not being taken on the battlefield.

I’m not suggesting that someone try to fight with a wooden wand. But if it was just for healing would it be any different from the clay modelling tools people use for doctoring (or do battlefield tools have to be LARP safe? If so do you have a wiki link for that?)

Also inb4 “you need an implement to cast spells” that only occurs for offensive spells which heal is not. (Though you do need it for swift casting them in combat)

Which is a good point.

@Arlien. You don’t actually need to hold it even have a wand to cast non offensive spells (unless you are swift casting them in combat). So if you have the spells known and mana off your own back. That’s fine. But if you are making use of a magic weapons (and a wand is a weapon) abilities. You need to have it in hand. 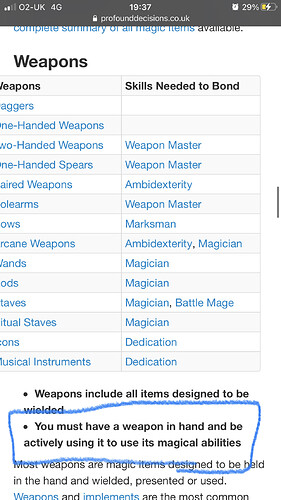 “ All weapons and implements taken onto a battlefield must have been passed by a weapon checker. You cannot use a wooden staff as a mage staff, or a wooden stick as a wand on a battlefield, even if you do not intend to hit anyone with it.”

Makes sure there’s no confusion at all.

Thanks. Does this apply do tools for surgery do you know? As they are just small knives it would make sense for them to have the same rules?

I can’t see a specific rule but all the saws, small knives and scalples I’ve seen out there are coreless foam latex props. Drop PD an email at rules@profounddecisions.co.uk if you need a specific ruling on that.

Notably its also very hard if not outright impossible to do full on surgery type traumatic wound treatment on the battlefield, since to quote: “This roleplaying can only be performed in a tent or similar building suited for use as a physick’s chamber - it cannot be performed on a battlefield.”. Pretty much all you can do on the battlefield is Chirurgeon and herb delivery. As such you shouldn’t need the saws and scalpels on the battlefield in the same way. Not sure about any hard and fast rules, for that you’d have to email PD.

It does not affect me or anyone I know. It’s just one of those inconsistent rules things. I doubt it ever really comes up. So it doesn’t really matter

But yes. Moral of the story is wands need hands.

Most healers on the battlefield have soft tools if they use them because we know that our patients, or quite likely ourselves will at some point end up poking ourselves with them as we attempt to avoid becoming the next victim!

You can treat Traumatic Wounds on a Battlefield. I used to do it a lot and even 5 years after my Physick died, I still have to remind players this is possible.
It’s one of the most widespread rules misconceptions at Empire, and usually what happens is people quote the exact bit you did, which only applies to “How to give someone their hits back after 10 minutes of rest”. But the rules on broken limbs and TWs are in a different paragraph without that limitation.
https://www.profounddecisions.co.uk/empire-wiki/Surgical_skills#Physick

It’s only the third ability there that has the “Only in a suitable tent or room” rule.

If you spend at least 2 minutes of appropriate roleplaying treating a character then you may restore the use of a limb ruined by the CLEAVE or IMPALE call or treat the effects of a traumatic wound. Some traumatic wounds require longer than 2 minutes of treatment, as directed by the trauma card.