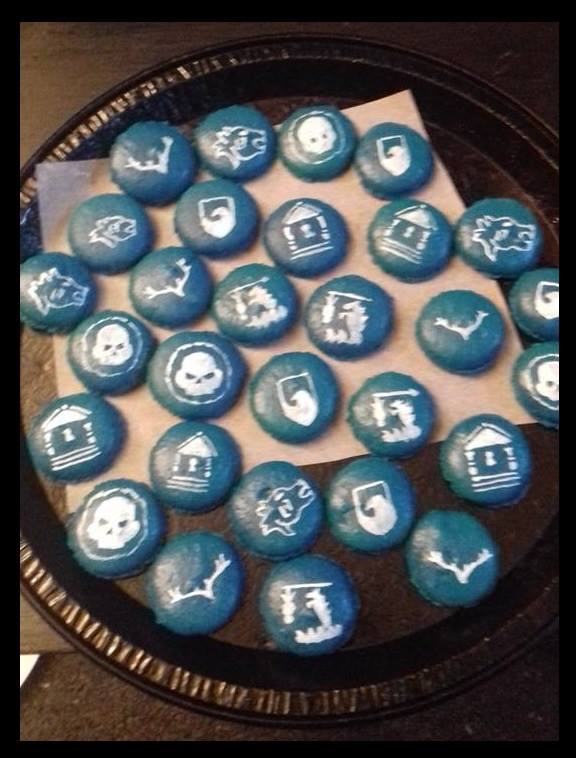 576×758 58.1 KB
++EMPIRE FEASTING++
Cross-posted from the Facebooks
Just a bit of fun … Harry Harrold (who has forgotten more about making food happen at LRP events than many people have ever learned and who knows who all these CELEBRITY CHEFs are) found this out of an old, spooky cupboard. It’s from way back.

It is by no means an official diktat about food! It’s literally just a bit of amusement which is why it is not on the main wiki. I tried adding a list of things I have eaten from various nations and got as far as “bacon cake, hot buttered rum, virtue macroons, pie, vegan fish pie, and so many damn biscuits” and then found myself getting trapped in a taste-bud nostalgia and had to stop.

As there was some interest, I thought I’d slap it up here and generate some of those sweet, sweet Facebook clicks

+++BRASS COAST+++
Freeborn food is big and bold in flavour and colour. Fruit is favoured for colour, and spices for flavour, in both sweet and savoury dishes. This is a land of grass and groves, not the vegetable fields you’d find in the Marches. Tomatoes and saffron are highly popular, although the less well off might use tumeric. Nothing is disguised; a dish is what it is. You won’t find the rather stylised presentation of, say League or Dawnish cuisine, but a more informal style. A salad, for example, will be mixed, rather than composed. Wine and fruity drinks accompany the meal.
CELEBRITY CHEF: Ottolenghi or Jamie Oliver

+++DAWN+++
The food at Dawn’s feasts display the glory of the host just as much as the troubadours’ tales that accompany them. Themed courses that show off the cleverness of the chefs might show scenes from Dawnish tales, a pie baked in the form of a castle perhaps. Unexpectedly, being a chef is an acceptable job for a noble. Yeomen may be cooks, but many of the most glorious feasts are prepared by nobles. They rather look down on other country’s cuisine: Dawnish food has everything a civilised palette might wish for, so anything they share, the foreign chef probably copied.
CELEBRITY CHEF: Any of the Roux family.

+++HIGHGUARD+++
Whether they are in their chapters or on campaign, the Highborn eat communally, like the Urizen. They tend to rich and filling food, often steamed or boiled. Puddings, both savoury and sweet, are the standard. Perhaps it’s because of their long-past history as a sea-faring people, perhaps it’s because they have better things to do than prepare complicated dishes requiring a deal of attention during cooking. They’re suspicious of over-dressed, foods, of the sort you might see in the League. While they have quiet pride in their solid culinary technique, they eat to live, they do not live to eat.
CELEBRITY CHEF: James Martin

+++IMPERIAL ORCS+++
All orc meals are single-sitting, one course affairs; soups and stews are common. You’re more likely to find offal at an orc table than elsewhere in the Empire. Imperial orcs keep a small amount of each meal and add it to the next they prepare. These usually end up in the stockpot that’s often boiling away at an orc fire. It’s considered good luck to add bits of dead ancestors to the pot as well. They’re also keen on food that can be eaten on the march; especially pasties that are savoury at one end and sweet at the other.
CELEBRITY CHEF: Fergus Henderson

+++THE LEAGUE+++
Fine foods are important in the League, but not as important as the social opportunities they present. Their formal food is an excuse for intrigue. Their informal food is an excuse for intimacy. Rather than eat sat at a table, fixed in place for an entire meal, they prefer to mingle with other diners. Thus they like picnics, or buffets with trays of small plates passed from hand to hand. Like the Dawnish, League chefs are proud of presentation; it’s another way of keeping score. Unlike them, they delight in novelty, bringing influences in from across the Empire and abroad.
CELEBRITY CHEF: Nigella Lawson

+++THE MARCHES+++
Marcher tables groan with food like no others in the Empire. Fields of corn and root vegetables, and orchards of many fruits, feed these people well and are traded throughout the Empire. Marchers like big hearty meals as befits a nation with such bounteous produce. It’s usually simple, hearty stuff. Let other nations care for superficial presentation, Marchers know that flavour lies deep, right down to the soil. Quality is assumed, as long as it’s Marcher, and quantity is preferred. Lots of villages, households and towns have signature dishes that they love to prepare and whose recipe they guard jealously.
CELEBRITY CHEF: Tom Kerridge or Clarissa Dickson Wright

+++NAVARR+++
Navarr food is driven by pragmatism. Their recent lifestyle is constant change as they travel the wilds. Adapting to that has brought a tradition of dried food: jerky, fruit leathers, and mixes of nuts and cereals. Every Striding has its techniques for preserving food for the long Trod, and hunting brings fresh meat to the fire. There’s more opportunity for grander cooking in a Steading, Here their travel throughout the Empire brings influences from many nations to an eclectic cuisine where a Marcher-style pasty might share a table with a dish heavily spiced in the style of the Brass Coast.
CELEBRITY CHEF: Valentine Warner

+++URIZEN+++
Urizen’s agriculture is limited, producing just enough of the staples to feed their people. Chefs from other nations would consider this a dreadful limitation, not so the Urizond. They appreciate subtlety in flavour, and novelty in technique. In everyday meals, the delicate graduations of flavour in plain foods are treasured. For grander dishes, each step in a recipe is precisely considered in pursuit of Arete. The most prized dishes are technically challenging as well as precisely flavoured. Rather than use spices in big, bold flourishes like a chef from the Brass Coast would, they delight in sparing and accurate seasoning.
CELEBRITY CHEF: Heston Blumenthal

+++VARUSHKA+++
Varushkan dining is informal. They celebrate at night, and this evening eating is marked by merriment. Varushka likes lots of small dishes on the table at the same time rather than courses. People talk while eating and drinking, and the greater the variety the more there is to talk about. Guests are encouraged to bring their own dishes to the table, and this variety feeds conversation and breeds a convivial atmosphere. This variety is a symbol of Varushkan propsperty, just as much as the honey they brew into mead, use to flavour cakes and biscuits, and slather on dark bread.
CELEBRITY CHEF: Hugh Fearnley-Whittingstall

+++WINTERMARK+++
Wintermark eat simply and as families most of the time. However, they love to gather for feasts, held by the Thane of their Hall or another notable who wishes to call a celebration. Wintermark feasts are boisterous; full of boasting, carousing and such. Their eating is much less formal than Dawn, they focus on quantity, whereas Dawn is about spectacle and presentation. They don’t use individual plate settings, food is laid out and individuals simply help themselves. A Marcher would find themselves at home at a Wintermark table, although a Wintermark feast would be just be a meal to them.
CELEBRITY CHEF: Richard Corrigan

TL:DR - have fun with food.