Clare from Player Support here again. This time we’re looking at the subject of LRP combat and how to look awesome while doing it. A large proportion of people like fighting and are at Empire for epic battles and dirty woodland knifing and that shenanigans.

There’s no right or wrong way but there are definately ways people prefer and ways to look amazing and give everyone a better more dramatic experience they’ll remember.

Nick Turner has written this for me. Nick runs our New Player Weapons training sessions on Fridays of events and this is very much his bag!

Just before Christmas Clare asked me to write a short piece on the Ethics of Combat at Empire and try to describe the feel that we are trying to achieve. Writing about combat and fighting styles is highly contentious as it is one of those things that everyone has their own views on how and what. The age old discussions of heroic vs competitive, spear vs sword/shield rage on just as they have since Peckforton opened its doors nearly 40 years ago.

So why has this task fallen to me? Several reasons I guess. I am both a player and referee within the game so I see both sides of this part of the game. I have a significant amount of battle/fighting experience over my 25+ years of playing and I’ve studied martial sports to a high level. I also run the new player combat briefs on the Friday afternoons (alongside Emma Rowden and Johnny Fisher).

LARP combat is by its nature a competition, driven by the need to “win” a fight for character survivability etc. There are a lot of talented fighters across the Nations who fight in many ways.

“Competitive” fighters use terms such as “hard skills” to justify their actions, but in the end up just optimising. Light weapons, large shields, certain stances, targeting certain parts of the body etc. It turn from epic combat to something that can be likened to sports fencing where there are primary targets and the equipment has been selected to give maximum advantage. But being honest it just doesn’t look that good.

“Heroic” combat is often ill-described as “two-thirds combat” – the idea that if you slow down blows it will look better, and make you look like a hero. But why should I handicap myself in a fight by not using my weapons at their full potential? Likewise slowing down is hard to do without it looking hammed up. Also, what if I’m not playing a hero?

You are in your own movie (and in everyone else’s)

Personally I have no issue with either style. They have their own place in the hobby but I don’t think either fit the ethic of Empire as a game. Empire is a sweeping vista of conflict, a gruelling world where word and sword carry equal weight. The setting of Empire is one of epic tales, of hard fought battles, of heroes and villains. The visual feast that we can see in the pictures that the ever talented photographers give us is one of individual stories. Look out over Anvil at dusk and you are transport somewhere else – into a story.

Therefore I would like to advocate a third view – that of “cinematic” combat. This is how I picture combat in Empire should be and it is this that we talk about at New Player briefings. Hopefully I can persuade you to the same view.

When you play you are the central protagonist in your own movie, and we all want that movie to be a blockbuster. We want the orc that we have struck to feel the hit, we want to see the rage of our foes as they meet us, the fear in their eyes as they fall back under our assault. When we take the field, be it alongside a band of Imperial heroes, or as a horde of barbarians we are contributing to everyone else’s movie.

Modern movies and TV series have developed exceptional choreography in their combat scenes, aimed give a sense of awe when we watch them. 13th Warrior, 300, Vikings, GoT, Musketeers, The list could go on. I don’t know about you but it is that sense of awe that I want when I take the field. I want to be able to pause, look around the battlefield and picture that I am in my own film.

How does this translate to combat at Empire?

The combat system at Empire is designed to advocate this thinking. In essence it promotes a certain set of ethics by which we can play.

For example, I can name just a few rules that are aimed at this style of play.
1: The rule of hero points insist that appropriate roleplay is used when performing a call. Go big or go home. https://www.profounddecisions.co.uk/empire-wiki/Appropriate_roleplaying

2: Taking damage and calls requires certain actions. A cleaved leg requires you to fall over – no “Monty Python’s Black Knight”, likewise when hit by strike down needs you to hit the floor properly. https://www.profounddecisions.co.uk/empire-wiki/Calls

3: The one-second rule is designed to allow for these blows to be used and weapons to be swung, essentially negating the DPS “drum roll” idea of some competitive fighting styles. A spear is pulled back and thrust just feels better than when it is waggled near an opponent. Even with knives a good solid swing looks better. It also allows time to aim for a specific target and ensure the blow is pulled for safety. https://www.profounddecisions.co.uk/empire-wiki/Combat

4: Spell Vocals are cool (and required). A chance to put your own spin on the call you are about to make. Using them in a suitable manner, be it imposing booming vocals or quiet whispered sneaky – they still add to the moment.

5: While you are on the ground bleeding out you are still part of combat. When you hit zero in Empire you are not unconscious so you can engage with the game. Call for help, insult your foes, plead for mercy or bargain for your life.

Cinematic combat is not optimal, I realise this, but it is about having a winning mentality for the game as a whole. It’s about fighting your best without relying on the fact that we are using LARP equipment and showing a great story. And it is still effective.

It is full speed, but not “quick”. It is roleplayed, but not hammy. Swing from the shoulders, not the wrist. It’s about attacking from a different angle, without being seen to be “trying a move”. It’s about going big when using hero points. Go hard but safe!

Fight differently when you monster a battle rather than as your character would with a mask on. Think of how it is for the other person in the fight. Get into character.

Roll with hits, stagger under a good blow, or the force of an arrow. Using a full range of motion. Be vocal and show your emotions. Play your injuries. Roleplay the s**t out of it. “Choreograph” the fight in your head, but don’t plan it. Think about how it looks to everyone around you.

Empire is an aspirational system, both in terms of look and style and I feel that combat should be aspirational as well. Cinematic combat is about looking good, fighting well but giving everyone, including yourself, their own personal “extras”. It shapes the game and give stories that people will tell around the fire for years to come. 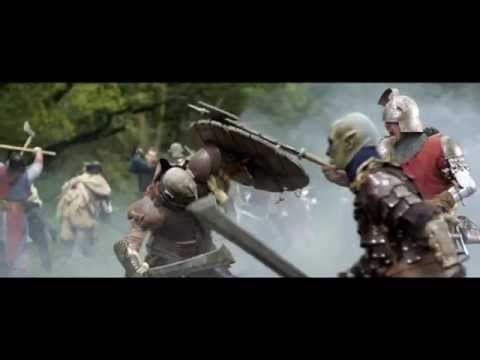 If you are interested in learning more, please come to the combat briefs and have a listen further. It never hurts to try a new thing.

Though when you were hit by a wooden shield or a full-swing semi-hard weapon at Treasure Trap you didn’t have to engage in cinematic LARP. You just fell down and stayed down…

This is good thinking, but… too magicians with rods fighting on a field might be a little quick, yet it’s still basically a light sabre fight XD