Fantastic Beasts and do they exist?

Alright, this is related to my previous post on heraldry, as it concerns the beast we intend to use as our Charge, aka centerpiece.

Our current train of thought has led to what we are reffering to as a “Summer Wolf”, essentially a wolf infused with the spirit of summer so it has antlers, in the same way that changelings do.

My question is; Do such infusions occur to animals to make such a thing possible, or would it be entirely hypothetical. Furthermore, do creatures such as the classic unicorns, griffins and wyverns exist in any capacity, just for further reference.

Thanks for any input, and I hope to see you at the next Empire event.

Id have a look at the below link on the wiki. Pretty much covers your questions.

Perfect, just what I was looking for. The wiki is one hell of a rabbit hole, I’m glad someone’s had time to map all its warrens.

Griffins: Do exist in the Mountains of Urizen and the Brass Coast, though they’re extinct in Wintermark. They’re also common in the summer realm mostly under the service of Hayaak

Wyverns: Are a particularly vicious breed of drake.

As for ‘summer wolf’ I believe, though I may be wrong (I can’t find a definite answer on the wiki) that only humans have Lineage, though myth and legend can describe many things that can’t exist.

The description of things through myth and legend despite them not existing is what the player who put forward the idea proposed as an explaination, and although I would want to verify with a ‘Higher Power’ before taking this to its conclusion, once again my thanks.

If you’re Navarr I would be careful about changed beasts, as that might smack of vallorn influence, not something you would be celebrating.

Animal totems for existant animals are a Varushkan thing, legendary beasts tend to crop up in Dawn as part of their heraldry, although in both cases sticking to a Navarr colour pallet of browns and greens should mean you won’t be mistaken.

As far as I recall in game only humans can show lineage, but heraldry never stuck to the real world.

You may get questions asked though.

Best place to check would be the Navarri board. (I’m Highguard, we have completely different ideas!!)

Where can I find the Navarri board may I ask? Also I’ve been told there’s a Facebook group for the Navarri nation too.

(All the nations have one, all called Empire LRP: [nation name])

Thanks again Charlie, your help has been invaluable.

Where can I find the Navarri board may I ask?

It’s with the other nation boards under

The nine human nations and one orc nation that make up the Empire.

Awesome, thanks Canashir, still new to the forums and this help is really appreciated.

As a Navarri its fine to use Summer lineage. Briars and the spring Realm are a sensitive topic as it links with, again, the Vallorn. A wolf wolf woulf be fine, horns work to. What nation do you plan on representing?

We’re planning on being a full Navarri banner, and I have here a really terrible MS Paint mockup of the arms we may end up using. Ignore the yellow eyes, they’ll probably go. 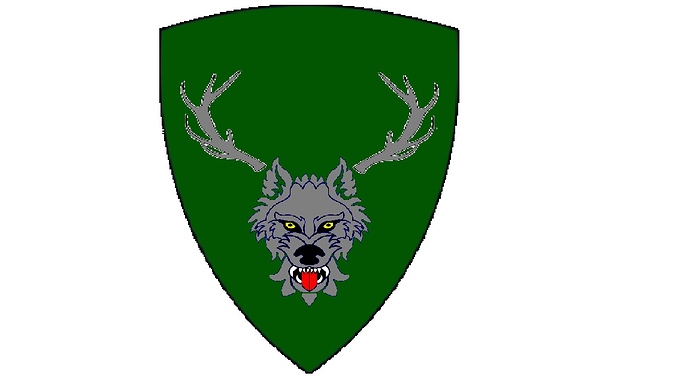 Nice image, have you considered using white rather than grey for the image, to get a better contrast on the green?

For the sake of heraldry both white and gray fall under the banner of “Argent”, and you’re probably right about it being a little dark, but a bit of me knows that if it’s too bright it’ll be more noticable when it inevitably gets muddy.

The only observation I’d make is that it’s very Dawnish looking. The Navari banners I’ve seen so far all have a very tribal/ Celtic look to them.

Would something more along the lines of the image linked work? http://www.freetattoodesigns.org/images/tattoo-gallery/tribal-wolf-4.gif

I’d love to make it more Celtic and ornate except for two reasons, the first being that it still has to be something I can make into a banner, and honestly I find it hilarious how inept I am when it comes to anything remotely arty. The second is that I set out to make it as heraldically accurate as possible, which includes the high visibility/recognisability of any design, so as to be seen and interpreted from across a battlefield, and if all the Navarri are swirling masses then this should stand out from them, while still remaining true to all design requirements.

A quick one when it comes to Celtic and Navaar. It does implicitly say to steer clear from Celtic knot work in the brief. There’s quite a lot of useful advice on the below link.