Summary: I’m looking for tips to portray a character ten to fifteen years older than me. Specifically a character in their late forties played by a player in their mid thirties.

So, the recent winds of war re the Mourn had me thinking. It describes “Most of the Mournwolders who remain tend to be older, - men and women in their forties and fifties who still remember life as part of the Empire.” If it hasn’t been hugely oversubscribed already, I’d like to play a character like that - who has been a Jotun thrall for most of his life but is reaffirming his loyalty to the Empire by his presence at Anvil. (I’m not retiring my current character, but he’s a Dawnish war-witch so has an inevitable glorious, tragic death waiting)

That’s why I was thinking of playing a character significantly older, perhaps ten to fifteen years older than I am. I’m not really sure how to go about it though, so I’m asking for tips. What would be a good way of going about this?

I’m not quite sure what you are after, so this is what comes to my mind:

You would be slightly more physically aged, with probably silver streaks in your hair (or all silver hair) - you can get some idea of this from looking at actors aged 35 and then aged 50, and see the difference 15 years makes in their appearance.

Character wise, you have 15 years more life experience. This can go many ways - you can use the 15 years to develop bitterness, chew over a sense of injustice, etc or go the other way and develop more tolerance and kindness towards others. You have seen a lot more human behaviour from an adult perspective, so you are more aware of the various shades in human behaviour and the many, many reasons people might do things. That doesn’t mean that you agree with them, or excuse them, just that you have had more contact with the many shades of grey in humans, so very little of human behaviour is new to you - you have seen most of it before.

You might also dress more maturely/soberly - comfort over looking good, to a lesser or greater extent, depending on your character.

I would expect you to value actions over words - you have lived long enough to know that words are cheap, while actions can fix things. You would also know that the consequences of actions linger on, long after the original action is gone.

I can’t think of anything else at the moment - I hope this has helped a bit.

Not sure why but I think scars usually make a character look older. Perhaps old healed scars gives the impression of someone who has been in a lot of fights but is now too old for that. I think they also wrinkle up the face a bit.

Your photo looks like growing a beard or wearing a fake one could instantly make you look older. Then make that a bit white/grey and you could probably pass for 40-50 without too much trouble.

Interesting concept for a character! I’d be happy to help discuss and try to find out more for you about how being a mournwolder under Jotun rule for so long might affect your character.

I think there are many ways to interpret this, as there are mournwolders with many different backgrounds and agendas. This depends on all sorts of things including where in the Mourn you lived, what sort of life you and your family had before Jotun control (eg were you miners and maybe weren’t happy with how power was in the hands of farmers in the Marches), your views on the Empire etc. There’s no one overarching type of Mournwolder

I fall within the age bracket of people who remember the Mourn being lost originally. I think too much make up and greying to try to make yourself look old doesn’t come across too well, to me. After all, we don’t think we look so old haha! And beware just replicating draughir physical rep!

I’d much rather you created a well thought out character and role played it well, with some lovely tales about your life experience and made it believable than chucked a load of facepaint in or overdid the aches and pains. Tho sure, if you want to portray some work injury if it’s relevant to the character. It’s so hard to generalise about people in the second half of their forties - you get plenty with no aches, hardly any greys and wouldn’t let on in public that they’re feeling worn out. But you might like to rein in the relentless energy. Some of us can keep going for a weekend, but you won’t see us the following week when we are knackered, recovering! The ones who can’t might not consider coming to anvil in the first place, unless they’ve got a burning agenda or support from others?

I must say, the bit of write up about many Mournwolders remaining being in their forties and fifties resonated very well, as you might expect. It made me think,which of our Marcher characters is in that age group. I’d love it if it inspired us to think about what our characters were doing when the Mourn fell as its a life event that should stick in your mind. And the last wickerman too. And to think if we had any relatives or friends in the Mourn who stayed there, and how we felt about it. I also wondered if we would ever have an opportunity to meet some of this age group from the Mourn in Anvil and what that interaction would be like/what common ground there’d be/grudges/resentments, sorrows, hopes or dreams.

I think there are many ways to interpret this, as there are mournwolders with many different backgrounds and agendas. This depends on all sorts of things including where in the Mourn you lived, what sort of life you and your family had before Jotun control (eg were you miners and maybe weren’t happy with how power was in the hands of farmers in the Marches), your views on the Empire etc. There’s no one overarching type of Mournwolder

I was thinking in broad terms of a community trying to live as Marcher as possible, in the expectation that the Jotun would be driven off soon enough. Someone who was in their early teens when the occupation started who has been trying to keep the spark of Marcher-ness alive in younger siblings who have no real memories of being Imperial.

Quite possibly a mining community who would have been largely left alone by occupying Jotun as long as they kept working the mines and handing over the output - in wagons of ore or finished goods. Or worse, seen as useful skilled thralls who put artisan weapons in the hands of Jotun warriors.

Waiting to be rescued doesn’t feel very Marcher though?

When it became apparent that backup was not arriving, you dug in your heels and settled down for the duration, enduring the taxes and working hard to stay alive (very Marcher) while at the same time keeping a quiet resistance alive with stories about what it meant to be a Marcher of the Empire combined with keeping as many cultural festivals as possible, even in a low key way, and demonstrating through your day-to-day life the Marcher ability to hang on and endure (Marcher stubborness) and the close relationship Marchers have with the land (I imagine it would be something like living through World War 2 - the rationing, the shortages, the grim determination to see it through…) Passing the Marcher Way onto the younger ones would definitely be part of this.

That is how I see it, anyway. Not so much ‘waiting to be rescued’ as enduring a situation that can not be changed while quietly working for better things and keeping the Marcher Ways alive.

With that mind set, when the backup finally gets there, are they going to hear about it for making me wait that long!

I think this concept sounds a good one. The Jotun page on the wiki - which you may have already seen, speaks of the existence of more specialised skilled workers, for sure. So I’m sure being a craftsperson or metalsmith or miner or quarryfolk or woodcrafter or whatever would be good etc But unless you went off to war you weren’t considered part of the top class Jotun.

We be already come across various Mournwolders in play from Jotun controlled areas and via wiki writeups who seem to exhibit Marcher like behaviour in various ways.

Obviously checking the Mournwold page on the wiki and looking at past Winds of war/fortune and history is a good way of fleshing out a character story in terms of occupation and place and motivations, too. And maybe linking up with other mournwold characters in the game.

Running any background you come up with past PD is also a great idea.

And what Lavender said is good too, about being practical and tenacious as an old oak tree, refusing to budge and sticking in there. And doing what they can.

Maybe just a little bit of grey at the temples/sideburns?
Either done with that coloured hairspray paint on your own hair, or gluing on some of that “crepe hair” with spirit gum, e.g. https://www.stagesuperstore.co.uk/crepe-hair---light-grey-4014-p.asp (or mix the grey with something like your own colour).

Going back to the original question, and having considered it some more, I think I don’t need a lot of makeup/prosthetics. Certainly not enough to be taken for draughir.

I think a decent false beard would probably be a good call. Where is a good place to get one from? I’d like something realistic and in a colour close to my natural dark brown (maybe a touch lighter), not one of the comedy Gandalf the Grey ones.

Beyond that, just styling my hair to emphasise where it’s thinning and receding could be enough to give the general impression. My profile picture is from a CP event in 2014 (possibly early 2015), and I know I’ve lost hair since then.

Alternatively, Dauphines is generally worth a look for any make-up stuff:
https://www.dauphines.co.uk/c-moustaches-and-beards.htm

Well, to play an older character there are two secrets: Looking like 50sh years old man, and acting as such.

The acting, I think is not that difficult: An easy solution will be to just be and talk with the wisdom that only years of experiences provide. Sentences like “You recall me of a friend of old, when we were young / your age”. And also it may be good pretending to have some health issues. For instance, you may get tired faster than a youngling, or maybe an old wound makes you limp slightly during rainy weather.

The characterisation: Seeing your photo I would advise you let your beard grow a bit (if you haven’t done so already) and then use some grey or white hair spray to simulate age. Do so as well with your hair. If you know a bit of makeup, you may be able to paint some sprinkles next to your eyes.

This will help if you are not very grey already, im using it on my beard at E1 so it matches my natural hair colour better 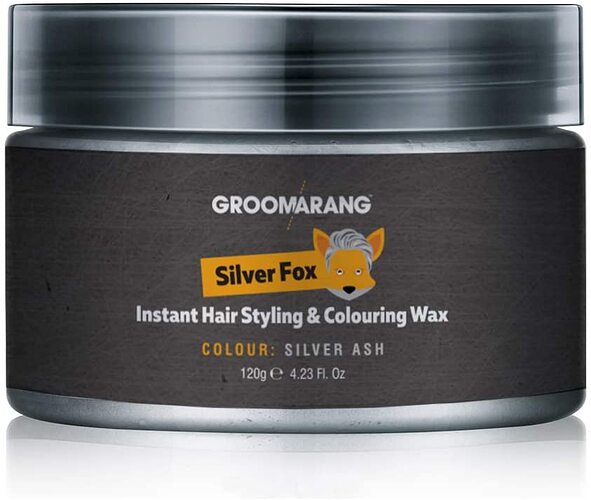 Give your hair some real personality. Join the latest trend and get the Clooney silver shine with the Groomarang Silver Fox Hair Colouring Wax. Made of natural ingredients including beeswax, brazil palm wax and tea...