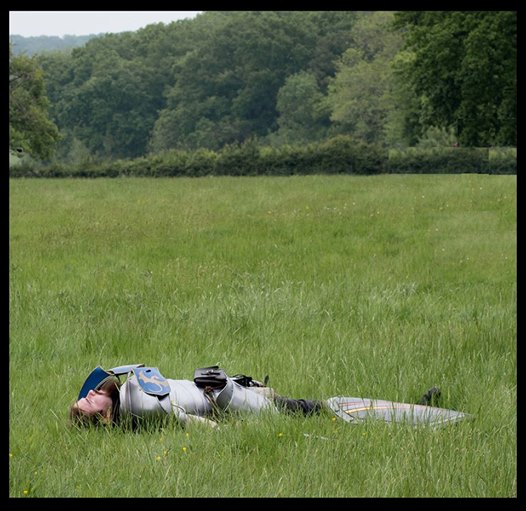 ## FLESH AND BONE
Shortly after the Spring Equinox, the dead rise in Weirwater.

The night is dark indeed when the corpses of dead Dawnish pull themselves from their graves. The stars are still hidden, and the moon is little more than a thin silver sliver when the first shambling ghouls begin their assault. Choked in dark earth, some of them incongruously garlanded in the flowers that adorned their graves, they lurch towards the nearest human habitation, hungry for the flesh of the living. The curse that calls them is egalitarian; noble and yeoman alike are dragged from their slumber and sent stumbling to prey upon their countryfolk. The freshest corpses are the most dangerous, but those who endure the assault of the ravenous husks talk of ancient, withered dead lurching alongside the more recently departed - some barely more than skeletons cloaked in tattered parchment skin, dull red flames burning in their empty eyesockets.

A night of horror ensues across Weirwater that leaves dozens dead. The nobles are well equipped to deal with these ambulatory cadavers, but it is easy to forget that many yeomen have served in the armies of Dawn in their time. Where people are not taken by surprise, they are generally able to survive until sunrise. Yet across Weirwater hundreds die. While a single solid blow is often enough to deal with the average husk, there are a great many of them. Worse, a number of the corpses are those of Dawnish knights and nobles, buried in their armour, often with their shields. Even the mightiest blow is to no avail when it is turned aside by rusted plate, earth-clogged chain, or a clumsily interposed shield.

There is no warning, but the people are not caught entirely unprepared. Ever since the horde of unliving horrors emerged from the Semmerlak, there have been people in Weirwater predicting an event of this nature - although they have severely underestimated the magnitude. There are stories of glorious courage and vigilance across Weirwater. The witches of Applefell and their criminal allies materialise out of nowhere to protect the town from a hundred or so corpses, only to disappear again with the sunrise. The war-witches of Spiral Castle join with House Griffinsbane to drive off a terrible force of withered Varushkan warriors and Dawnish soldiers that rise from an ancient battlefield in northern Weirmoor. The troubadours of Culwich rally the people of the village against a sodden cohort of drowned fisherfolk and stranger things that drag themselves, dripping and stinking, from the mud of the Semmerlak. Axe-wileding lumberjacks from the Weirwater Vales, many of them dour Varushkans, create a no-nonsense perimeter around their camps and chop any husk foolish enough to attack them into bloody pieces.

As the sun rises, the assault of the unliving slackens. At first it is easy to believe that the bright sunlight has ended the curse - that a single night of horror is all that they will have to endure. This proves optimistic, however. The husks have stopped attacking the living but they have not returned to their graves. Rather, they have begun to shamble and stumble towards Hawksmoor, to join the unliving army there - an army that is already on the move.

The abominable horde begins to move east through the trees, a slow tide of abominations moving toward the nearest large settlement - the hedge-encircled town of Hawthorne. As they march, they slaughter any living being that crosses their path, overwhelming a small village, several farms, and the estate of the Amici, a minor noble house. The witches of Hawthorne begin to muster their defence, sending desperate messengers to Applefell and Culwich, and south into Semmerholm, asking for aid.

Aid is already on it’s way, however. Two nights after the dead rise, the Golden Sun march into the forests of Weirsmoor from Astolat. Moving with grim determination, the heavily-armoured knights push eastwards as fast as they can. Passing Spiral Castle, the de Casillon nobles bring the commanders of the army up to speed on the terrible events overtaking Weirwater, and offer what aid they can. From the scattered reports, they estimate that perhaps as many as another thousand malign spirits have been unleashed into Weirwater - spirits that defile the fallen of Dawn by possessing the bodies of those who should have been left to sleep beneath the soil and driving them to prey on their descendants, their families, and their friends.

Even as they hurry to intercept the unliving host, they take few chances. As they sweep eastward into Hawksmoor, their forces spread out to ensure as many straggling unliving ghouls as possible are destroyed. The small groups of abominations are no match for a Dawnish army, and barely slow their advance … until they reach Hawthorne at least.

The army arrives to find the siege of Hawthorne well underway. The poison-thorned hedges provide an effective perimiter, but the hordes of the unliving feel no pain and even as the magical poison is ravaging their flesh they continue to push forwar. Bolstered by every noble knight and war-witch who can reach the town, the witches coordinate a desperate defence. It is not enough to turn the unliving horder aside - the living are outnumbered and overmatched by the dead - but their courage is at least sufficient to delay the unliving long enough that they are only just breaking through the defences as the Golden Sun arrive.

The cadaverous host initially ignores the Dawnish soldiers, focusing their attention on murdering as many of the people of Hawthorne as they can. As the horns sound, and the army advances implacably across the torn fields surrounding the town, the ghouls slowly begin to register the presence of five thousand knights and yeoman-soldiers. Their attention turns away from feasting on the civillians, and they lurch forward to engage the Golden Sun.

Previously, the unliving have avoided direct engagements. Even during their ill-fated foray into Astolat, they retreated rather than fight the Golden Axe and the garrison of the Castle of Thorns. That is no longer the case. The desperate moaning howl they voice as they pour out of Hawthorne is like a living thing, assailing the spirits of the Dawnish soldiers that seek to stand against them. Some break - it is too much for them - the terrible hunger, the terrible moaning, the horror of fighting the walking corpses. Here and there among the hordes, on tattered scraps of surcotes and tabards, and even the occasional soiled standard, one cannot fail to spot the heraldry of the nobles of Weirwater; the burning phoenix of House Novarion; the white eagles of House Orzel; the golden pegasus of House Arwood; the red gryphon of House Griffinsbane; the stars of the |De Ledure and the De Céleste; and the hand-and-spiral of the De Casillon. While the army might have begun as a horde of Varushkan and orc corpses, perhaps a third of their number are now made up of the mortal remains of the people of Dawn.

The battle is savage; the unliving hurl themselves onto the Dawnish soldiers without regard for their continued existence. The first wave is quickly dispatched … but the second wave is harder to deal with. By the third wave, the Dawnish lines start to buckle slightly. Here an armoured knight stumbles, tripping over a fallen body. There a yeoman presses forward a little too far and is quickly surrounded and torn apart. The lines hold, but people begin to die. The fourth wave pushes the line back a step.

But only a step. With the drums and the horns, the magic of the witches and the words of the troubadours bolstering the will of the warriors to keep fighting, with the cry of “Glory!” echoing, the army as one soldier takes a step foward. Then another. The unliving rally - there is no doubt that there is some will at work here directing their strategy - but the onrushing tide slackens. The fields around Hawthorne are littered with the bloodless dead … and with too many bleeding bodies of fallen soldiers and civilians.

The unliving retreat. Between one moment and the next, they seem to lose interest in both Hawthorne and the Golden Sun. They begin to shamble north, away from the town and the army. After a few steps many break into a loping run. Fleeing. A cheer goes up from a thousand throats, from the Golden Sun and the survivng defenders of Hawthorne. The enemy has broken!

And then the final horror begins. Here and there across the battlefield, and in the town, bodies begin to move. Soaked in blood, eyes filling with an unnatural hunger, they rise again. The vessels have been cut down, but the spirits that drive them are not so easily dismissed. They seek out new hosts, and the nearest hosts are the bodies of those who fell desperately defending their people. They turn their hunger on those who they died fighting alongside. The cheers turn to wails of horror and grief, as those courageous combatants who gave their lives endure a terrible second existance as pawns of the enemy.

Most of the newly risen are dealt with quickly, once the initial shock lessens, but several dozen follow the main body of the unliving horde north. The Golden Sun give chase, and over the course of the season there are several other engagements with the cadaverous horde. In each case, they go roughly the same way. The first few rounds of battle go to the Dawnish, but the unliving wear them down, exhausting them until they make mistakes. Then, on an unspoken signal, they flee the field and regroup, and the whole thing happens again.

The strategy of the Golden Sun minimizes the number of Dawnish soldiers who fall to the unliving, but conversely they give few opportunities to destroy the enemy. And after every engagement, a portion of those who have fallen rise again, reinforcing the unliving and slowly transforming the horde from a mass of Varushkan and orc husks into a mass of Dawnish husks.

The unliving army is on the offensive. The Golden Sun have won each engagement, but have not dealt many significant losses to the unliving horde. The situation is complicated by two factors. It doesn’t help that in one night the initial horde, primarily Varushkans and orcs, was bolstered by an additional thousand Dawnish troops. Worse, it has become clear that the husks are recovering a proportion of their losses even as they fight - very much as if the spirits that drive them are seeking out new bodies when their old one is rendered unusable. On the plus side, while the Dawnish have lost some manor houses, villages, and farms, the host has not managed to gain any significant ground, and the situation is considerably less tragic than it would have been without the intervention of the Golden Sun.

No score draw, more or less. Which is significantly more optimistic a result than it would have been if thousands of unliving horrors had been left to rampage over Weirwater without a disciplined army of Dawnish getting in the way. Can you say “nom nom nom”? I know you can!

You can read it on the main wiki here → https://www.profounddecisions.co.uk/empire-wiki/381YE_Summer_Solstice_winds_of_war#Flesh_and_Bone_.28Weirwater.29

The photograph is by Beth Dooner and I would very much like to apologise for the awful, awful things I have done to it in pursuit of clicks. I am so sorry. It probably shows Riculf D’Aurelius (Nathan Hoyle) being dead.