So we’re just over a couple of months out from E1 now, and no doubt we’re going to get a host of new player and groups. Making the former is something we talk about a lot, but how about making the latter?

There are two things in the creation process that I think can be a bit of a stumbling block when it comes to making a group, oaths and aims, so I thought it would be good for perhaps some of the longer-term players to share their wisdom!

First up then, how do you decide on your group oath? Did you tie it into your nation? Your characters’ backgrounds? Perhaps the Virtues? Or maybe you focused it on what you want to achieve in-game as a group?

Which leads us to deciding group aims. Did your group come up with specific, achievable aims, or leave them as fairly vague (for e.g. “gain power”)? Did you choose a mixture of short and long-term goals? And, should you manage to achieve them, what do you do then?

Personally, my group’s oath relates to our group background and the Virtuous animals (since we’re in Varushka). Our goal was something specific and achievable, which did indeed lead to the slight problem of “what next?”

Feel free to share as much or as little when it comes to specifics below; your general thoughts and opinions may go some way to helping others, whether newer players or older ones making a new group!

I made a Varushkan Outpost last year, based in Ossium. Basic idea was a group of merchants trying to improve the economy. It seemed like that was a gap left behind in all the military and magical concerns I’d seen. I think that aim was really a bit too vague though, and in hinsdight I’d probably have chosen something more specific.

For the Oath itself, I took ‘The riskier the road, the richer the reward,’ which is a slight alteration of one of the Ferengi Rules of Acquisition from Deep Space Nine. I liked the idea that it gave a reason for these non-combatants to be out in the wilderness, but also that it suggests we stick to roads like proper Varushkans.

A couple of years ago I inherited a group in Dawn, and ran with it…

Concept = Dawnish privateers
Virtue = Prosperity
Themes include as many fleets as possible, and trying to bring extra money, investments, and cash revenue to Dawn* (which had nil in the way of major resources, and an aversion to the leaders getting into trade…)
Short term goal = become known as skilled traders/pirates
Medium term goal = find some way to screw up the Grendel economy
Long-term = win a Bourse seat for Dawn

Our methodology in general was borrowed from Cohen the Barbarian, off Discworld

At our peak, we were churning out trading buff rituals, trying to open trade negotiations with the Great Forest Orcs, and forming a squadron of co-ordinated warships unseen outside the Brass Coast

*The Earl, me, used to complain that Dawn marched with silver helms, and silken banners, and holes in their socks…

I finally got around to creating the Vardovich as a group and actually writing a back story*, which establishes the group as old. It is always moving and never settles down for long, taking its ‘village’ of caravans and the back story has a reason for that.

I love banner oaths so much, as an opportunity for some of my favourite larp activities: bonding a strong group together and ritualistic behaviour.

To that end, my group’s banner oath is basically a manifesto of what we stand for and how we see each other (as a League camorra, with the ties of family and Loyalty that implies). We make a point of all reading it aloud together before every battle, which is great for getting into the right mindset as intensely close, religious fanatics. Because we are very loud and public when we do this, it feels like making a clear statement of intent to anyone who cares to listen of what we are about. If there are people from outside the group we fight with a lot and feel very close to, we can invite them to join the reciting of the oath as a way of showing our links to them and willingness to defend them like our own.

A cheeky bit of deliberate design we included was also to have certain key phrases in there which can be shouted as battle cries (often with a call and a response built in, like ‘Steel guard my body! Virtue guard my soul!’ so one person can make the call and everyone else can reply) or in religious ceremonies where we want to imbue them with a cult-y feel.

I’m a huge advocate for how designing your group is hugely important (I always want the group designed before everyone makes characters, so we can all fit in perfectly, rather than the reverse), so to my mind the exercise of writing the group oath is superb for nailing your concept down and seeing what it is your characters have all bought into.

Our starting point for our Highguard chapter was to have a brainstorm around what we fancied doing, a group focused on Vigilance and decide on a few keywords, Unflinching, Orthodox and Loyal, to help us define things.

Then one of the group leaders put this together:

We use it whenever someone new is sworn into the chapter also when anything calls for a big group ceremony. But also we have it in a big banner at the front of the chapter tent and we’re able to refer to it and quote parts of it whenever we’re having discussions about what we should do. It’s a great way to keep to your group concept. It’s also a great way to bolster yourself when you’re getting into conflict with any other group, just think back to your oath and what that says, especially the bits that say “we do not bend on this”.

Also it’s goth as all hell, which is very on point aesthetic wise for our group and Highguard

“No horn sounds for battle that we do not take the field. But we swear that whenever the Empire sets foot upon the field of battle we will match them boot for boot, blade for blade. We are slain but never die, defeated but never beaten, our banners are captured but never fall. We will become war.”

The Bloody Butchers Guild of Temeschwar came up with our oath out of character before the very first event. Then at the event all of us gathered in the Guildhall tent in a guild meeting (known as “The Bloody Table”) where we each declared the oath to the Guildmaster and the rest of the Butchers, and signed in blood (well, red ink…) and drank from a goblet of red wine. It was a very solemn occasion, and really bound us together with loyalty. Subsequently, at future events, whenever anyone joined the Guild or attended Anvil for the first time (for those whose backgrounds involved already being guild members), they were introduced to the rest of The Bloody Table by a sponsor who vouched that they were aware of, and would uphold, the Guild’s traditions. Then they swore the oath and were welcomed into the Guild. 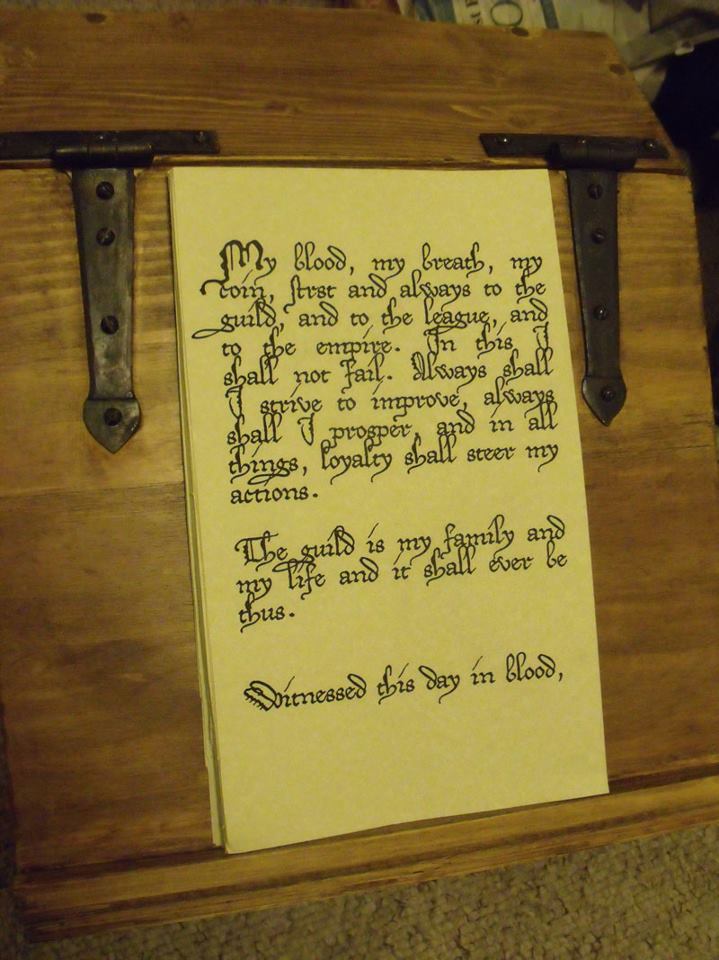 We went for easy to remember and also refers to our backstory, as we trace our creation to an event in the patrician wars before the Empire was founded. Our white horse on red on our surcoats also makes us pretty noticeable.

Various bits of this also work well at funerals!

The Monastery oath is a fairly simple one about obeying the Rule of Pickham. We took ideas from Carmelite Rule, where we make sections of it fit Virtue rather than Christian ethics, and dropped any bits we didn’t feel would be fun to play.

Our coven oath is swearing to pursue our foes beyond the gates of death itself. Because it was written by a screaming necromancer who really liked the Paragon Vardas and knew Whisphers through the Black Gate.