Hello there,
I just won this set of armour in raffle and I was wandering if it were decorated with some leaves and vines etc would it count at mage armour. Or is it a bit too heavy for that??? 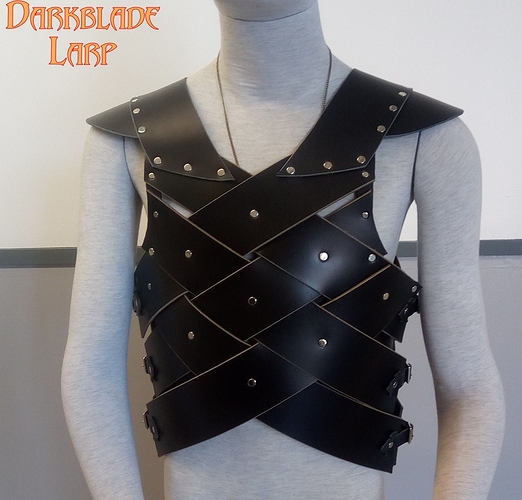 Not so much heavy… it’s fairly light leather in a decorative pattern… but it’s a bit encompassing. If it was just the shoulderpads and the top strip or two, then great, but as is…

It looks more like Armour than Mage… it looks light it might well be part of a suit of light armour (Navarri, or Unconquered Highguard).

Also, you’d need another few pieces to use as a suit of mage armour (headpiece, belt, bracers, perhaps…)

You won this in a raffle. I’m assuming you don’t have a great attachment to it. What if you removed the bottom two straps on each side, reducing this to a shoulderpad with gorget/pectoral?

Using those straps to make some bracers, and then decorating those, would be a step towards converting this into mage armour…

Thank you, I do have a circlet and bracers. I was just wandering if i could wear this also. I didn’t think I would. I’d much rather save it and keep it all together than dismantle it. I can easily keep it for a Striding member or another character for the future. Or even my current if I decide that one day I’d rather take the field without any spells. Or maybe with a bow and arrow instead.
Thank you for the advice. I did think it was covering a bit too much to work properly.

If you used this as a pattern, and replicated it with stiff cloth, I think that this would work well…?

Okay okay… hear me out… Put lights in it or on it. Painting magical glyphs onto it would also help make it look more magicky. It also depends on how you are planning to style it. Style it in a way that there cant be any doubt as to it being magic. But basically putting lights on it would help to make it look really magic. Plus lights are just cool. I think as it is it now it wouldnt pass as mage armour so basically you’d need to do some work to make it look all mystical, but I cant see why it couldnt be done.