Im new to Empire and will likely be coming to the event in July!
Looking at the Wiki and other resources i want to be involved in both the combat game and another area to do during downtime. Religion has taken my fancy.
Does it make sense in anvil to play a ‘paladin’ or ‘warrior priest’ of courage? That is to say i am a combat orientated character but with a congregation (to be involved in the synod) and dedication/hallow to be involved in the religion game.
Might be worth noting that in terms of character dress i will likely be wearing a gambeson rather than priestly clothes but will make/sew a courage patch (axe/blue flower) onto the gambeson somewhere.

Sorry for the info dump, just wanted to hear some ideas whether combat/priest is a thing that happens in Empire.
Thanks for the help!
Corbeck

Welcome to Highguard! Warrior priest is a perfectly good concept; my previous character was one!

‘Paladin’ as a term is not highly used in Empire but the concept of a religious warrior is fine, especially if your chosen virtue is Courage; priests of courage are famous for being warriors and having a notoriously short lifespans due to charging into battle.

Please be aware combat makes up a small part of empire; make sure you have plenty to do outside of hitting things!

I assume when you say ‘downtime’, you mean ‘time off the battlefield’ rather than ‘time between events’.

Priesting gives opportunities for lots of game in between battles while on the field, but the game you find in between each event is limited to your own imagination (same with all of us!).

Thanks for the reply! Good to know my idea has legs

Well aware of combat being a smaller part of empire, thats why i want to get involved with synod sttuff and possibly some of the economic side of the game. Is there any way of making it clear i am a priest during time off the battlefield?
Also maybe as a fellow highborn you may be able to help me out - i will likely be attending empire with a small group of friends (3). In general are some of the larger highborn chapters happy to have you tag along with them in battle? Im assuming that as a 3 person group we would likely be useless on our own

thanks for all the help guys!

Thanks thats exactly what i meant - how would you recommend getting more involved in the priest game ?

We’re a really friendly lot and we’d love to help in any way we can!

My first character was a priest, at the very first Empire Event, I happened to have a time piece, so made myself invaluable during the speeches section at my first Virtue assembly meeting.

I haven’t priested in many years (said priest died during Year 1), but from my memory, be prepared to do things. Talk to your cardinal, be the one who does what is asked and what isn’t asked, but is sensible. Walk around the field and talk to all the priests in every nation.

Choose how you want to priest. Be a bully (within reason, be mindful of inclusion, but you can totally bully people for virtue reasons), be a voice of reason, be a scholar, but be that thing, be known for that thing.

Vote in everything and bug everyone else on how they voted. They might lie to you, but be someone who knows things.

Always have a notebook and a pen/pencil that works (fields are bad places to have a pen stop working. I carry a pencil and a tool to sharpen it when it breaks).

That was my first character at Empire and I can heartily recommend it. You’d need to take Dedicate and I would recommend Annointing over Hallow as I found it more fun personally but YMMV.

I think my load out was (Dedicate 2, Exorcism 1, Weapons Master 2, Hero 2 and what is now Mighty Strikedown 1) which let me be a clanky heavy armour wearing type with a big two handed sword. Which I then got to charge round the battlefield with my chapter doing Courageous stuff. Pro-tip, pick up Fortitude quickly as I found myself on the ground bleeding quite a bit

Btw a Gambeson is an excellent bit of light armour to start with as you can then layer plate over the top when you can afford it, I bought myself a lovely set a plate from White Rose Apparel but I’d recommend trying out if you can handle metal armour. It can also be a right pain to keep clean, make sure you always clean it and spray it with oil when you take it off, otherwise rust alllll the rust. Looks great though

Priesting wise there’s a lot you can do by being someone with very firmly held opinions who doesn’t back down in the Highguard Synod, in the Courage Assembly and in the General Synod too. You can do this just by having the Congregation and keeping an eye on the politics that’s going on. As a priest, especially from Highguard, you have carte-blanche to stick nose into just about anything in your nation and elsewhere in the Empire too. I would work on crafting some very firmly held oppinions by looking at the Highguard and Courage briefs on the wiki and then going in all guns blazing. You might be surprised just how much you can get done.

I’ll let you find out what happened to my character Asher on the field, but I’ll tell you life as a Courage priest was never dull or lacking things to get passionate about

And because it’s always fun to show off, have a picture of me in full charge battle gurn mode 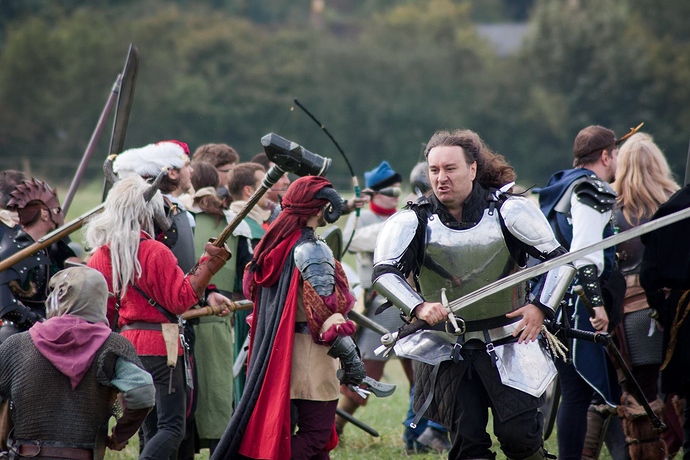 Everyone in Highguard is a little bit of a priest, but indicating you’re a full-time priest is usually just announcing yourself as one. Get yourself a hood, for starters, and read up on the wiki about how important they are to Highguard (especially priests). There is a specific priest archetype in Highguard called ‘Wayfarers’ who are roaming priests; they usually wear braided sashes (however not all priests are wayfarers).

Regarding battle, Highguard is highly organised in terms of battle lines. If you’re a group of 3 you’ll probably end up in the ‘small chapters unit’ which combines smaller chapters together into a fighting force.

Welcome to the best nation in Empire (and I’m not just saying that).
Bring bacon.

The cliche for HG in battle is a big clanky shield wall, but there are a few chapters who do the skirmish role that would be glad of 3 of you if you’re willing to run around for a few hours

(Also bacon can be buggered)

Thanks for the good advice! looks like ive got a bit of reading and research to do !

Ill take a look thanks

Thats the plan with the gambeson

Would you mind enlightening me about the differences between anointing and hallow if you wouldnt mind ? Ill be sure to do my homework in regards to priesting then !

That is a magnificent battle gurn !

Brilliant, thanks for the advice ! Bacon?

Hallow puts a year long effect on an object that makes anyone who holds it feel a specific way whilst they do so.

Anointing puts a season long effect on a person that makes them feel or act in a specific way until it expires or is removed.

Anointing is a “stronger” effect; someone who is anointed can use that as a source of strength to overcome other effects that influence their behaviour, but holding a hallowed object doesn’t let you do this.

You can read the different effects here: https://www.profounddecisions.co.uk/empire-wiki/Auras_of_Courage

(Don’t worry about Bacon it’s just an in joke past it’s sell by date).

Ohhh anointing does seem fun! I bet theres some fun circumstances that can come out of characters being compelled to speak out and/or having no self doubt

Highguard has an ongoing thing about bacon. I’m not sure how it started.

Oh one thing Annointing requires consent to be placed on someone, Hallow doesn’t but people are free to drop the object and likewise with Consecration you can always walk out of there.

But there’s a surprising amount of roleplay and use that can be got out of something that gives people/characters permission to act in a certain way. Some folk will beat down your door to get an anointing