Thanks to Armdour for this amusing awesome photo. 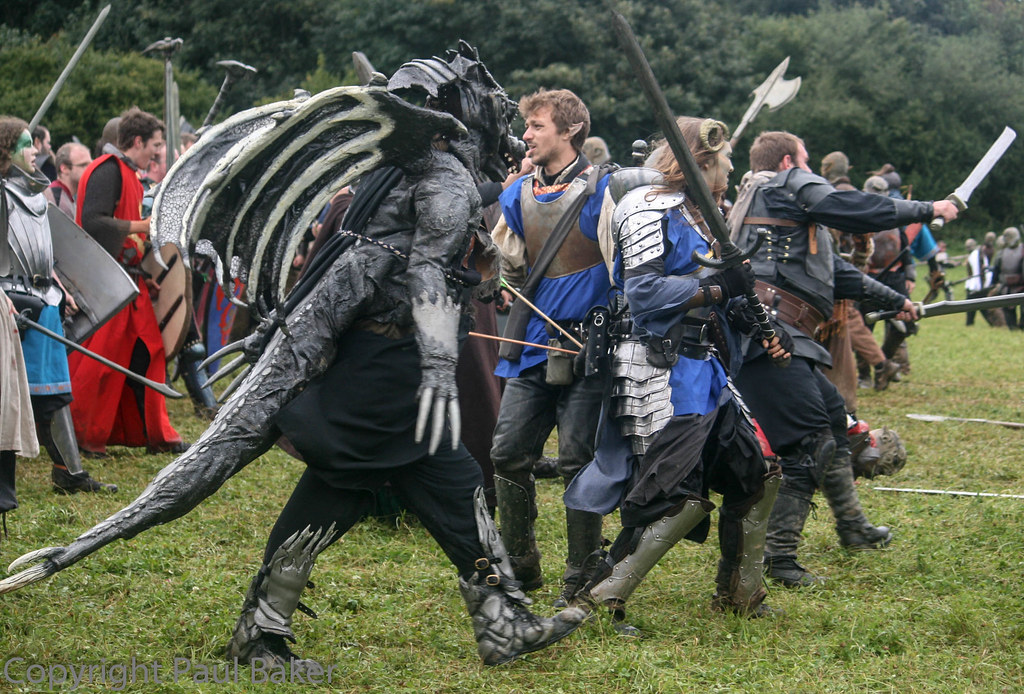 So I’ve fought these things before and it was awesome… but is it commonly know what they are?

Not mossy so not a MarshWalker?
Not furry for a Plaguewulf?
Not a genestealer… so not a Trogoni?

I’ve referred to it as a Hydra but it’s not multi-headed.
Wyvern? It’s got arms rather than a stinger?
Drake… best fit?

fought three drakes, unless they’ve changed the phys rep then no, I believe the person who was wearing the costume called it a abomination, whether that helps or not is a different matter.

Pretty sure it’s not a hydra on account of the whole single-headed thing.

I’ve generally heard them referred to as Drakes, I have to admit.

We have been using something similar to that but bigger for drakes. Which come in many shapes and sizes and are essentially massive angry rotweilers with scales and the emotional depth of a hungry shark.

There have been to the best of my knowledge no hyrda in play yet. This is what I think hydra looks like in Empire:http://img4.wikia.nocookie.net/__cb20060528184416/wowwiki/images/3/3e/Thessala_hydra.png

Currently I have 0 hydra costumes.

This makes me sadface

I’ve heard the name ‘dracolich’ being used for that particular phys-rep, but I can’t find that term on the wiki.

Catoblepas are mentioned on the Druj page.
Although I normally understand them to be the ill-advised offspring of the liason of medusa with a buffalo.

Meanwhile: Somewhere in the Barrens
“Bad news most revered and dreadful Het Skeltor… the Imperial Pinkies have destroyed all our wraiths”
“Oh fuzzlegrumphs… uh what fearsome forces do we have left Ghulai Bobathek ?”
“…we have some… Water Buffalo…”
“…Right water buffalo, they’re kinda ill-tempered… can we maybe paint scorpions on them most-venomful Ghulai?”
“… Uh sure mostunwuzzleable one…”
“Bitchin”

However attempting to bring a buffalo onto the site and into a custome and getting it to take its hits may be difficult.

If by mistake you bring a cape buffalo instead you wouldn’t need to worry about any of these things ever again.

A problem we have re:dracolich is that a few internal labels have leaked externally. There are no dracoliches in Empire. There are some bone constructs that are glorified skeletons.

Catoblepas are swamp-dwelling horrors with some sort of WEAKNESS attack, but right now the page is blank because I have no idea what they look like

If you haven’t seen it yet, you may enjoy reading about Marshwalkers. I know roughly what they look like (armoured shambling mounds) but buggered if I can find a nice picture for them.

On reflection, it does not look like a Bust.

I think I had the explanation that it was some kind of Drake that the Druj had mutated and venomed up for use as a war-beast. Probably explains why it is so stunted.

Catoblepas are swamp-dwelling horrors with some sort of WEAKNESS attack, but right now the page is blank because I have no idea what they look like

en.wikipedia.org/wiki/Catoblepas, but unfortunately I have a mental image of that being physrepped in LARP and it looks like a pantomime horse again.

As a side note, the bestiary pages about barbarians and monsters a pretty frikkin’ cool. Thanks to Andy and co. for their work on it.

Slightly on this topic; I’m building a Minotaur costume as a project (along with various weapon making and prop building) FOR FUNS. Any costume criteria that Profound Decisions want met for if I donate it after construction?

I’d quite like all the existing PD used monsters to have pictures and names up on the wiki so I can use the right ones. Its an annoying thing where IC I figure I should be able to recognise a creature or work out what I saw but OC the compromise is made of people calling things by the wrong name. (See dracoliche for the Winter Undead Drake thing and Troll for the recurring green Ogre(I think?))

I’d love to put pictures up. The steps would be

All fair.
If you can see it from the stance of seeing cool pages about Marshwalkers going up when I still have no idea what the skeletal drake or Lord Shemihazi are and I’m pretty sure photos exist of both of them, (although maybe not in a way PD can use.)

In some cases I’m afraid the answer is “weird or unique monsters” and thats why they dont get a wiki page.

Being the person inside that costume (on about the original post), no I was not a drake, I was something else.

Plaguedrake will continue to be my default until an information appears on the field to give its proper name. Which might never happen