In which faction would this outfit be most appropriate?

Bit late to the party but you could definitely make that work with Varushka. The helmet is the odd stand out, lose that for a fine hat and add a short sleeved/sleeveless coat and you’re sorted.

Hey citizens of the empire!

I did some quick sketches. Trying to figure out how to use most of the items I own. The colours aren’t as bright as I want them for the final product(supposed to be vibrant red, not faded pink), but that’s what you get for borrowing you toddler’s coloured pencils.

I think it fits the Dawnish brief. I chose a cockerel as heraldry, as it is a symbol of pride, honour, and courage. Not sure about the tower. 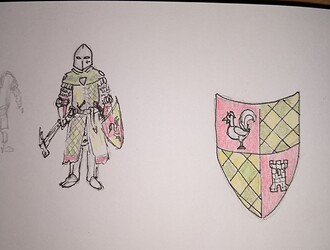 Am I going in the right direction with this?

it looks good, slightly on the complex end of Dawnish heraldry, which is generally at the “single big symbol” stage, but perfectly accepatble. No-one’s using a cockerel that I know of, there are a lot of towers (about 6? across Dawn and Highguard) as it’s a symbol of Vigilance, but not quartered.

Note that honour, while admirable, is neither a Virtue or a required Dawnish trait.

rest of the kit looks great

Glad to hear I am not off brief. I hope the end result will be more than suitable. Is there a page on the wiki for the symbols used in the empire? I couldn’t find one. Maybe I’ll just use the cockerel as heraldry and make a belt with all the virtues represented on it.

I don’t believe there are any heraldry rules at all, although some players may sneak in real world ones.

Better to look at the Virtue pages, as those have symbols associated with them which you could use as inspiration for your House.

Cheers I will go study the virtues.

While there isnt a list of specific heraldry meanings in the more traditional sense, symbolism plays a big part in the magic of the setting.

Heraldic magic is most commonly used in Dawn. it ascribes attributes of magical importance to mythical/rare beasts.

Sprit Animals are less common in Dawn, but it does provide meaning to more mundane animals.

The Runes may be most associated with Wintermark, but they are widely recognized across the whole empire and are in common practical use. The Runes of Summer are especially well associated with Dawn.

If you want a more religious route, each virtue of the Way has symbols associated with it. You cant really go wrong with any of them, but Courage is commonly associated with Dawn.

There are other symbols in the setting, Astronomancy and Dramaturgy are two big ones but they are typically not associated from Dawn (though it is absolutely acceptable for you to use these. The cosmic force of magic works regardless of your nation. It’s just unusual)

Really attached to the cockerel, but might go for another bird or rare beast from the heraldic magic or sprit animals.

Probably will swap the tower for a sun, or the axe and hammer.

I’ve managed to miss the heraldic magic! Never knew it existed, thank you.

Several nations also have a “groups in play” page which contains group heraldries and symbols, ill link the Dawnish one below, though there others if you want to be completionist

Id stick with the Heraldic colour rules though, they exist to make your heraldry look good!

So thanks to all the links and extra reading I might change the cockerel, which might be a bit close to a marchers’ symbol and go for the cockatrice, which isn’t mentioned as far as I can tell in the Heraldic magic, but is near enough to a winged serpent or wyvern to do the trick. That’s a good start I think. Will try to make some more sketches and see what I can come up with.

It’s a bit rough, but I am trying to integrate the hammer and sun in the design. Is that more like it? 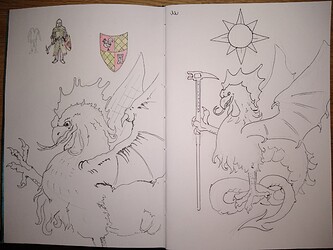 Looks good to me. Great for a banner or shield, but you may want a simpler version for smaller representations, if any.

I’ve just realised this has drifted into my specialist subject.

So firstly the move from Cockerel to Cockatrice is a great one moving you firmly into the Dawnish heraldic tradition. It might not be on the list but it’s clearly in the same design space, to the point that the only mention of the Cockatrice in Empire is as the heraldry of an NPC Houses.

Secondly that is a really cool design.

The one thing that has been missed out is what is arguably the page with all the meanings in Dawnish Heraldry as opposed to magic, Legendary Beasts although there is a lot of other information on it.

The obvious thing to point out is that many of the beasts similar to the Cockatrice, due to having similar deadly properties have some negative meaning within Dawn. The mythology of the Cockatrice draws on themes of the realm of Winter, and beasts that symbolise this realm have dubious elements. Many of them also have some positive reason a house might choose to use them but they have negative ones as well. This isn’t saying don’t use that symbol, more something to be aware of.

So in universe things you could draw upon in building the meaning of it:

Firstly the one mention of it is House d’Werwell it doesn’t say what they use it for, but this page gives an impression of

There is also the similarity to the Basilisk, which does exist in the Empire setting and is the symbol of Highguard. In Highguard it is a symbol of vigilance, and used as a guardian creature. But the legends around it are about a dangerous beast brought on side, and in heraldic magic it fits in the same space I would expect the Cockatrice to be used. (Not surprising considering the winter themes in Highguard and their use of that magic.)

I’d be tempted to lean into the Cockatrice being a Dawnish reinvention of the Basilisk (Which clearly wasn’t colourful enough), which means you can draw upon some of the positive aspects of the Basilisk as well as having the negative ones due to the nature of the creatures powers.

Thank you so much for the long answer. I love the idea of a Dawnish reinvention of the Basilisk.

I am scratching my head to find a background for the house (as well as a name) and this will provide some foundations to build on.

Due to the special circumstances we find ourselves in, I might find myself with a small group or solo. Would an Earl send his son to another (larger/more influential) house for a while? Keep in mind I am in my mid 30s. Maybe to study battlefield leadership?

Empire does not have hereditary positions, just because your parent was an Earl (any gender too), you do not automatically get that position. You’re not even a noble until you personally take your own test of mettle which would be assigned by the house you want to test into.

You could have been a Questing Knight for a while, looking for feats of a Glorious nature which you could use to find your path in life and help you decide which House you wanted to test into perhaps?

What you are describing is a Knight Errant, a Questing Knight has already passed their test but has fallen back into a similar lifestyle of wandering around looking for glorious deeds, for one reason or another.

So since you have a clear idea for Heraldry you probably want to start out as a Noble. Dawnish nobility is all about trying to be the most glorious figure that you can be, and there is no reason a noble shouldn’t turn up to Anvil alone if they thought it would boost their glory.

I was thinking that with the support of my family, my Character would have succeeded his Test of Mettle by that time in life. Still working on that. Mainly looking for a reason to be in Anvil on my lonesome and maybe pre game arrangements to enable RP. But maybe starting as a noble is a mistake.

I don’t want to separate from the house I am creating, I am hoping that some of my friends will be able to join me. As to the Earl, it will probably be a man, as I think the position is perfect for my OOC step father.

Competant noble of House X sent to Anvil to represent their House, assess for opportunities, and so on. Camps with and is introduced round by House Y, their local neighbours and allies. If things go well, more members of House X, including their Earl, may well attend later.

This allows for you to have your own Heraldry, an “off-screen” House to be expanded later, but also some friends to hang about with from the start.