allright i know i have post alot. but i am just hype for my first event so want to come prepared…so here we go!
my character juliet is a lineage though right now i dont know which,as its hard for me to pick one that can fit my characters personality. a quick overlock on her. she is a former orc slave in druj because of this she is scared,stressed generaly really shy . my first idea was she was a changelling mostly beacause of the aesthetic,but it seems to not fit really well with juliet…
any thoughts?

Having been a slave, she will have learned to adapt in some way to survive. Coming to Anvil could be her journey to understanding her lineage and (re?)discovering her personality?

A changeling could have survived as a slave, but perhaps they will have had to learn to bite their tongue, control their impulses. Perhaps she would have been someone who planned an escape, plotted revenge, who kept the group’s pride in their humanity through the experience?

I find thought experiments like this one of the fun parts of character creation: how did my character come through the crucible of life, and who are they now as a result?

If you can’t find a way to make it fit in your head, maybe drop the idea. Sometimes mashing concepts together doesn’t pan out, not every combination will work for how you want to play your character.

I reckon a Changeling former slave could work, but she is going to grow and change as you play her. That’s just fine: character development in play is great! Go, make new friends, have new experiences, find out how she goes from timid former slave to confident Changeling. It’s all part of the fun.

Edit: Oh, and Nation brief and Virtue will also have an effect on who she is. You can always use those traits to influence who she is too. One thing I like doing is comparing nation, lineage and virtue and finding where traits overlap, and really going for that.

thank you!! that really helped^^ i will try that out

Remember, the mental trappings for lineage are suggestions. You can have all of them to an extreme degree, or none at all. A shy Changeling would be unusual, but different is interesting and memorable.

When you say you like the aesthetic of Changelings, do you mean the physical or mental trappings?

physical. i have a big love for elven makings and unnatural eyecolors

You can also go with a low lineage route,
“You may choose to have the bare minimum, but you must have at least one of your lineage’s physical trappings if you possess lineage.”

I have only the one physical trapping and it’s not the Iconic trapping, but decided to focus more on the roleplaying side of the lineage, being gregarious, passionate, instinctive, intuitive, and avaricious.

If you wanted to go that route, you could have just the pointy ears or just some inconspicuous spiral markings, then play up the wrathful side. As a shy changeling, which sounds like an awesome concept btw, you could use your former slave background to create a lingering hate for the Druj or orcs as a species and fly off the handle about them whenever the opportunity presents itself.

You can choose to start off high on the visual trappings but not much on the mental side and then as you get more confident IC/OOC you can portray her “coming into her confidence” and become more changeling like in attitude. You can amp up both the physical and mental trappings from where you start over time if you want.

Perhaps consider picking a lineage that would have helped the character survive as a slave of the Druj. For example

Any friends your character had among those slaves might be dead now, or still a slave, or rescued along with your character but not attending Anvil. The last of those options would mean that later on another player could join you by playing one of those characters.

I have new experience anxiety, meaning I’m usually quiet and I do a lot of staring off into space. Weirdly, this translated well to draughir, with the ‘staring through someone’ and being quiet is seen as calculating. I opted to focus on the pack mentality (because it fit me the RL person) for the mental RP hook.

Some folks suggest taking one of your personality traits and blowing it up to 11. Could this work for you, if changeling isn’t working out for you, but you still want to be lineaged?

this is kinda my idea for how juliet looks at the moment as a channgeling ,one of the things that is inportant to me is that i feel like the race looks good with the character .so right now changelling is the one i think match her look the best (know the clothes is not on brief,its just for showcasing her overall look) 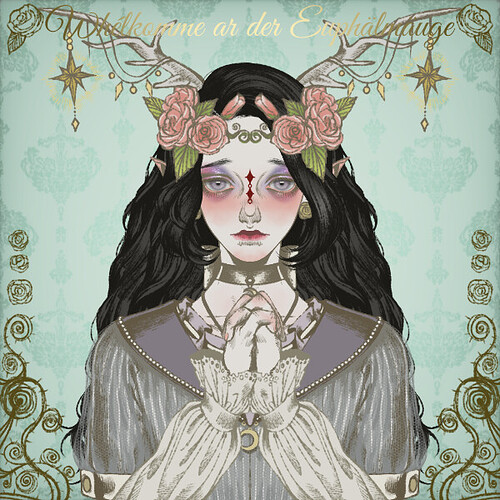 It’s possible that her antlers are deformed or broken from her captivity, their attempt to fully break her will. Druj can be awful towards their slaves, and try to deny them belief of the Way.