On Saturday at half seven we’ll be streaming a table-top roleplaying session set in the Empire world on Twitch (Twitch), using a trimmed down version of the Shadow Factories narrative system written by Christopher Edwards.
Over the last few days the community has been voting on details of the session, and the characters who’re going to be playing it.

Following Tuesday’s FB poll, we know that the adventure is taking place in VARUSHKA at a CULTURAL EVENT

We also now know a little more about our player characters. One is an adept of Winter magic (by one vote), with Night magic a close second. One of our characters is from the League, and one from the Marches (although it was a close run thing with Dawn). One of them is a Changeling. And one has a profound connection to Ambition.
Now we’re pleased to introduce you to our players: Christopher, Jude, Pel, and Rhi.

Chris is a fat, beardy white bloke with glasses, and hence has excellent camouflage from natural predators at LARPs. He lives in Glasgow with his partner and children (who thankfully take after their mother.) He spends his spare time writing gaming stuff because he Literally Cannot Stop.

Jude lives in Glasgow and enjoys roleplaying in the gaps between child wrangling, working as a surgeon for the NHS, climbing hills with her dog and writing short fiction.

She plays Lilith of the Chantry at Empire.

Pel has been LARPing for over 15 years in various systems, and also has a wealth of other nerdy, expensive hobbies.

Also a proud LGBTQ+ community member and a soulless marketeer in real life.

Rhi enjoys huffing & puffing her way up Scottish hills, just so she can take a selfie at the top with the beauty filter hiding how sweaty she actually is. She’s been LARPing for more than half her life, so probably deserves some sort of ‘long service’ badge that gives her extra hit points. She crams as many tabletop RPGs into her life as possible.

She tries not to tell anybody what she does for a living, because most people hate dentists. Probably rightly so.

Rhi plays Empire as Yarona, a Prosperity priest of Highguard.

Corralling the cats is Andy Raff, who will be performing some sort of role analagous with “narrator” which might be CS, Dreamweaver, Marshall, or Magistrate depending on whether we can come up with a good term that isn’t “game master” by Saturday. 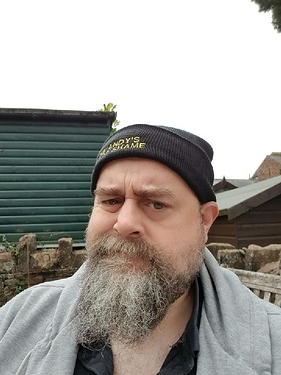 Moderating the stream during the game will be Mark Wilkin, who’s a veteran of Profound Decisions’ seat-of-the-pants approach to making Twitch content.

Mark is an original Empire fanboy and has been larping for a long, long time (no, longer than that).

In the “real world” he “does something on internet” as his parents understand it.

Ah, “something on the Internet”. Yes. You do that thing. Excellent internetting.