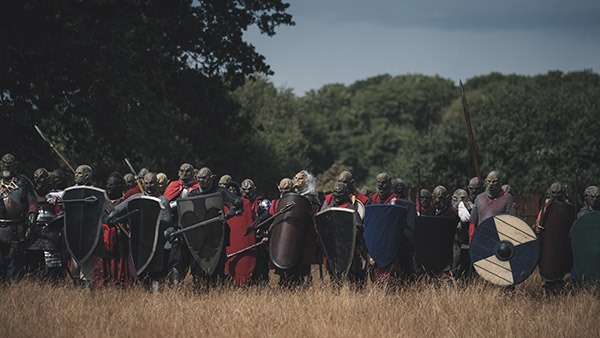 Most experienced players know that at every event we run there are two battles, one on the Saturday and one on the Sunday. People take the field with their nation, so you need to be by the gate with your nation before 11am if you want to fight!

An important rule in Empire is that if your character takes the field to fight on either the Saturday or the Sunday - then you must volunteer to monster the battle on the other day. This rule is very important - without it we simply could not run the battles.

To monster, you need to turn up between 9:30 and 10:30 at the monster tent. Head to GOD and get directions from there if you don’t know where that is. Please make sure you turn up before the deadline, we need plenty of time to get everyone briefed and ready for the battle, so we will turn you away if you arrive after 10:30.

Please bring appropriate kit with you. We don’t have weapons for everyone - so you must bring a weapon if you’re planning to fight. Basic weapons are best, but there will be signs on the toilet doors and in GOD advising on what weapons you can use on the battlefield when monstering if you have them.

We have a set of breastplates for the orcs to use, but the armour only comes in one size. Poorly fitting armour is uncomfortable and can injure you if you fall badly while wearing it, so it’s best to bring your own armour if you can. Speak to a member of our team if you’re struggling with our armour and we’ll do what we can to help.

You can’t take the battlefield if you are a non-combatant - but we do have low combat roles available. These are intended for those who are capable of fighting, but do not want to be caught up in a swirling melee.

We aim to make monstering as enjoyable as possible! We don’t succeed for everyone but some players volunteer to monster both battles they enjoy it so much. Regardless, when you’re monstering you know that you’re making the event better for everyone - and ensuring that there are plenty of monsters to make for an epic battle when it’s your turn to play one.

You can read more about monstering a battle here - https://www.profounddecisions.co.uk/empire-wiki/Monstering_a_battle

On a different note, a few players have been asking when the Winds are coming out. It’s a short gap beween the second and third event so we’re running a little later than we’d like. But we’re hoping to get the Winds of War up today and once they’re done, we’ll start uploading the Winds of Fortune.

Finally, don’t forget that Friday is the deadline for pre-booking the event at the current price, so make sure you do that if you haven’t already.