Hi there! I have a really large interest in vexillology and I was wondering if there are flags for certain nations that I can find to show my pride and appreciation towards?

It is an intentional aspect of the design that none of the nations have a single flag or symbol that represents them, but there are a number of somewhat variable elements. For instance, Dawn is usually represented by a golden sunburst on blue, Wintermark is strongly associated with the three interlinked rings that symbolize the three traditions, etc. I believe that there is a banner to represent each of the ten nations hangijg in the Senate, but they are not -the- definitive flags of each nations.

This thread may help: National symbols - #9 by Mark_Wilkin

While Dawn may be the simplest one, that’s not even a national flag

As I understand it, when the last king of Dawn (Alaric the Lame?), agreed to join Dawn into the nascent Empire, he also put up his House symbol as available to all aspiring nobles of the nation. Thus it is worn by many Knights Errant, and Questing Knights, until they get their own heraldry or beyond.

This makes it similar to the several forms of tartan available for any Scottish person to wear regardless of clan.

So while a tartan kilt is symbolic of Scotland, and you can place a good bet that anyone wearing one is Scottish, the Golden Sun on Royal Blue of Dawn is almost certainly being worn by a Dawnish, but is not in itself the Dawnish national flag…

… which is almost certainly not a diagonal white cross on blue.

Although national flags are open to interpretation if you can modify the interest to house sigils, chapter badges and hall flags there is plenty of heraldry visible on the field in each nation for individual groups, and most people will be overjoyed if you ask them about why they wear that symbol and what it represents. Just be prepared for possibly getting your ear talked off!!

Absolutely. My first character decided to note down every symbol worn on the field. It took him about 2 years of touring camps, and he was just about to sit down and paint them all up when he died.

There were 4 different pheonixes, 6 different towers, and 4 different corvids of various sizes. Navarri and Brass Coast were the most difficult to classify by heraldy.

I did drop off a text version of his notes, arranged by nation and then by province, with the militia. So that they at least, would have somewhere to start with a witness statement like:

“He was wearing yellow and green with a tower on it…”

There are indeed some good stories behind the heraldry

You can also run into the Ashborn, the Ashguard, the Ashbourn, the Ashward, the Ashen Tower, the Tour de Cendres (Tower of Ashes) and the Ash-hearts.

One of those is made up.

There’s all sorts of banners on the field beyond the nation flags.

This is a picture from House of Rooks, a recent Highguard player event. 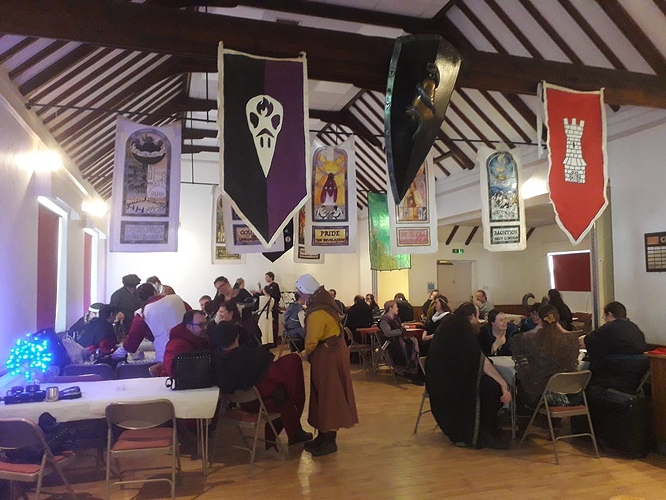 It has a few chapter banners and banners for each virtue that usually live in the chapel.

Also randomly I wonder how various flags at Empire measure up to the principals of good flag design mentioned in this video?