I have two questions:

Thank you very much!

The parts of the talisman superficially resemble pieces of armour, but armour that is ornate and ceremonial rather than practical. They are often decorated with runes, crystals, gems, or other magical accoutrements and it is clear that the armour protects the wearer through magic rather than by physically deflecting blows.

There’s some fairly simple economy on the price of a potion… making it consumes some herbs + some alchemist’s time. Since an alchemist can make potions basically as often as they want to, you might like to make your own conclusions on the effect of an infinite supply on an open market. Which leaves us the price of herbs… which, just like the rest of the commodities, are deliberately not a stable market.

<<edited to remove some in-game information, which whilst obvious is not suitable for this kind of media>>

Thank you very much!

Again from the wiki:

To qualify the talisman must include three of the following items including at least one of the first three items on the list:

So you could feasibly do a sort of collared vest, with big shoulderpads (pauldrons) and perhaps the gorget pectoral, and then something flowing down from that, accompanied by interesting wraps on the lower arms and lower legs. Frankly, I’m now thinking of something in dark blue, stiff with runes and silver cobweb patterns…

Okay thank you very much!

I’ve made padded cloth mage armour before. If you attached upper chest “plates” and shoulder sections it could look quite good.

So like what Geoff describes, but just backing everything to the robe (or sewing foam/plastic plates underneath and decorating over the top)

In all cases, you’d have something with a superficial resemblance to a coat of plates (Sections of protection with a fabric or leather support layer) but a clear “Hello yes I am a wizard” look.

My current mage armour options include “A heavy woolen robe with eyelets on the shoulders for attaching pauldrons to, worn with a big bird skull around my neck, and a 6” wide leather belt"

Do you have any advice on how I can make them and/or buy them?
Also I was wondering if leather could be used as mage armor ir I painted and decorated it?

Sorry for all he questions.

I made my pauldrons out of papier mâché. You can crease the paper in places to make it seem worn and a bit more leathery. If you don’t want this look, make sure you stretch it out properly. Having a smooth creation will take more time but it is worth it if that is the look you are going for.

I recommend doing a few layers maybe five or six. This should give it adequate strength and if you mess up on a layer before, you have a chance to cover it over.

The trick to how good it looks is really how you paint it. I’ve gone for more natural colours to try and make it seem more realistic. Once you have painted it, if you then add a layer of glue and water over the top to waterproof it, you should have something that you can use in all weathers. Look into the glue you use as it will affect the colour of the product.

The great thing about papier mâché is that the shapes are only limited by the mould you build it on. What nation are you, may I ask? Depending on which nation you are will determine the kind of designs you can have and how complex it can be.

I hope this helps.

I would add maybe varnish instead of more glue? The nice bit about mage armour is that it doesn’t get thumped that much, and so is likely to last quite a while.

Leather can indeed be used as mage armour, but make sure that it’s painted, decorated, or otherwise obviously more “mage” than “armour”.

@Geoffrey_Willoughby I think I may have used varnish in the end. It was a while ago when I made it. If I did then it was clear varnish that had the best effect.

My advice with varnishing and painting is to test some stuff out on paper first to see what kind of effects you get from each mix.

(Also no problem. I’m not saying in advance, I saw you thank you and decided to edit this to include it so I don’t clutter up this page).

I just wanted to double check those things. I think that all sorted.

I recommend yacht varnish, aka marine varnish. I have a vambrace that’s a thermoplastic base with birch bark strips glued to the top, covered with marine varnish. The thing about this sort of varnish is it’s flexible and doesn’t crack. PVA is splash resistant, but water can soak in. You can use it as a water soluble support for 3D printing.

I’ve got two pauldrons, both of which were cheap and simple to make.

The upper one is made out a chunk of 2"x4" wood. I roughed it out with a billhook (For maximum Marcherness

) and then used a Dremel with both a rough sanding head and a carving head. Then I pyrographed the green man on with a borrowed wood burner. The design was copied from one I found on the internet, drawn on paper with a soft pencil, and transferred by rubbing with the back of a spoon.

The lower is made out of Multimorph, which is about £11 for half a kilo. It’s plastic beads you can melt in hot water. I melted a handful, rolled them out like pastry, and kept warming and rolling until I got it about 5mm thick. I then wiped the water off and traced around a paper template with a sharpie. Kept it warmed up a bit and chopped it out with kitchen scissors and a set of trauma shears. The trusty Dremel returned to sand the edges and even up the shape. Spraypaint basecoat, off-white acrylic. After it dried, I wiped it over with a tiny dab of brown/red on a paper towel, before rubbing most of that off again with more paper. Painted the runes on and then marine varnish over the top. Lots of cosplayers use a thermoplastic sheet called Worbla for armour, but that’s waaaaay more expensive and rolling it out’s not much effort. Although it’s not as even thickness. 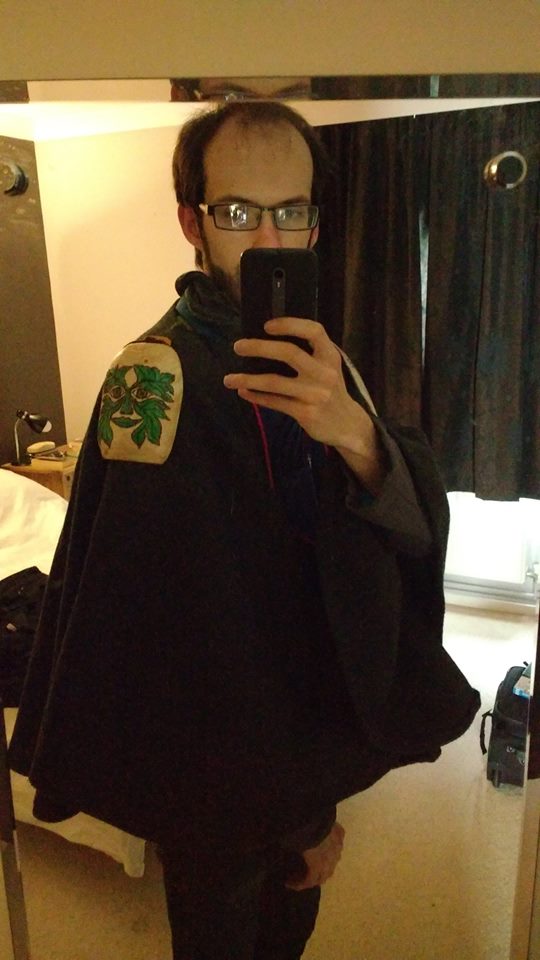 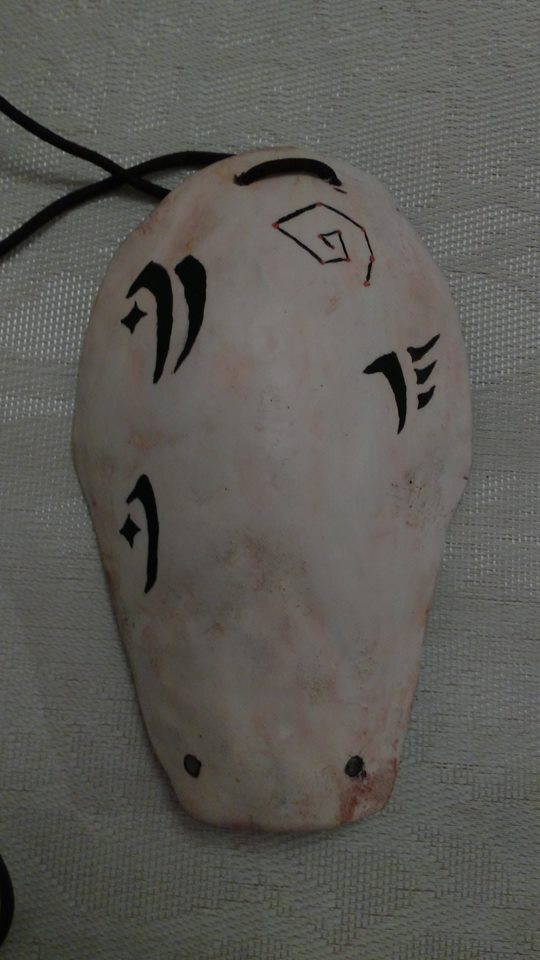