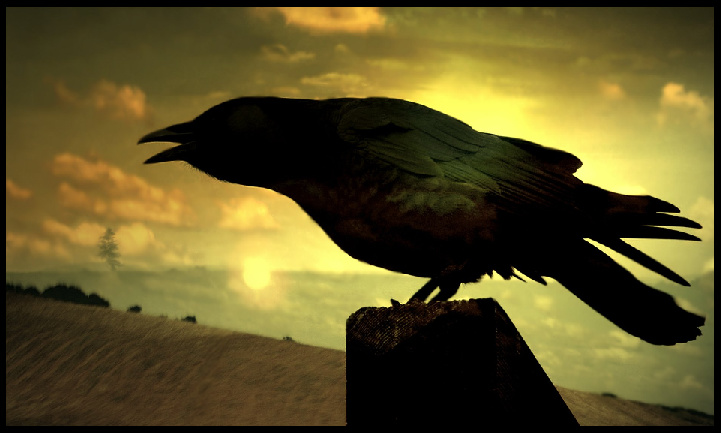 With a beat of wings the large black crow settled on the post. Tilda wrinkled her nose and stared at it. Would it bring bad fortune to drive it off? Or worse if she let it be? She tried to think what the Keeper would have said.

She missed Walter - he used to make everyone laugh at harvest time, putting straw in his coat and pretending to be a scarecrow. Gone now - like the others. She hadn’t been allowed to see him. No-one had. He uncle said no-one could see the Keeper cuz he’d gotten sick but Tilda knew her Uncle was lyin’ because her did that thing grown-ups do when they’re lyin’ where they don’t look at you proper. Anyway the Keeper could do magic so he woulda fixed himself up quicker than a rainstorm in July.

Maybe he weren’t dead she thought… Maybe he had turned himself into a crow and flown away! Maybe the crow was Walter the Landskeeper come back to them… She stared at the crow - and it stared back - each of them waiting for the other to say something.

The crow gave a loud craw and began to peck at the body nailed to the post. Disgusting! Horrible! Walter would never do that. Marchers treated their dead with respect. She picked up a stone and threw it at the crow and it quickly flew away.

Even before they’d actually been deployed, the Marcher, Freeborn, and Wintermark assemblies had condemned them. After their successful apprehension of the rebellious Dogri Thulebane, the Varushkan and Navarr assemblies declared their support for the army - and their methods.

Now, a set of opportunities for the five national assemblies that have pretty strong implications for military campaigns going forward. You can learn about them here → https://www.profounddecisions.co.uk/empire-wiki/Not_dark_yet

They’re not just about the Iron Helms, either, You’ll see what I mean if you look them over

I really do need to work out how to sell hot popcorn on the field, I’d be super popular and make mad bank $$$

How to Pop Popcorn on a Campfire - It's So Fun! - TheCookful suggests it’s possible but it looks pretty perilous…

Do it the old fashioned way, popcorn kernals, vegetable oil, pan with a decent lid and a heat source.

I’ve done it with 2 clamped together roasting pans on embers. Sure we burnt a few but it worked OK.

I get my 10 year old guides to do it with 2 tin foil cake cases, a couple of clothes pegs and a tea light, although that’s more practice on not being afraid of fire, as they usually don’t leave it on the heat long enough to go pop. Too impatient.