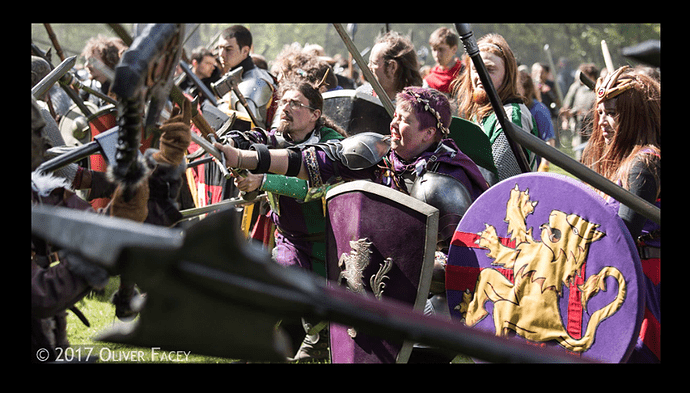 ++OCCUPATION++
Along the western borders of the Barrens are four massively built white granite tower-keeps collectively known as the Towers of Dawn. This ancient fortification has been assailed many times by the Druj, and briars, and bandit orcs alike, but the Towers have never fallen. They have protected Dawnguard since they were first raised, a symbol of Dawn’s resolve - that these lands will one day be theirs. They are one of the mightiest fortifications in the Empire, only the Castle of Thorns is larger. But stone walls alone do not make a fortress impregnable - only the resolve of Dawn’s armies can do that.

But nothing lasts forever…

The reports of the refugees are fragmentary, confused. Piecing them together, it seems that the Druj split their armies into two forces, sweeping in from Murderdale and the Carmine Fields, driving everything before them. The main body of orcs struck with merciless force, overwhelming the defenders almost before they realised they were being attacked. The second, smaller force fighting under a scorpion banner, followed behind consolidating, rooting out resistance, and rounding up as many yeomen and nobles as they could find.

The two forces met at the Towers of the Dawn. At full strength the great fortification could hold off three Druj armies for a season, but the Towers were depleted by the attacks of the Barrens Orcs last year, and that damage has weakened them disastrously. It would have made little difference if the castle had been at full strength - the Druj host spread out before the walls was clearly intended to overcome at least two Imperial armies and the Towers.

Alone, the Tower garrisons are barely able to slow the attackers down. With siege ladders and siege beasts, the Druj make short work of the courageous - but ultimately doomed - soldiers. Between the confusion of the swift attack, and the Druj living siege engines, the castle itself is torn apart and the walls reduced to rubble. The bodies of the defenders are mounted on spikes thrust into the rubble, and a small force of shrikes left to add anyone who tries to remove the bodies to their gruesome gallery.

There is some fighting at Drycastle, but it is short-lived. Those nobles and yeomen who try to resist the Druj are given no quarter. Their efforts are enough to buy some of the citizens of the Dawnish town the time they need to flee, but those who remain to fight pay the ultimate price. Their heads now stand on pikes mounted along the shattered walls, as the Druj make the settlement their new base of operations in the region.

After their initial push, the Druj forces quickly spread out across the region securing or destroying the manors of the noble households that call Dawnguard home. The lands of House de Carsenere, House Martel, House Aurelius, and House Vexille are all believed to have been overrun by Druj forces. There has been great loss of life, but nowhere near as much as their might have been. It seemed as if the Druj were here to conquer Dawnguard, rather than just to kill Dawnishfolk. Their main focus was on securing Drycastle and the Towers of Dawn, allowing space for refugees to escape north into the forests of Axmure. A few brave nobles even lead a rag-tag band through the mountains into Holmauer. Dawnguard has never been safe, and many households had contingency plans in case of an orc invasion that stretched back decades.

For now, a pall of silence has fallen of Dawnguard. Some minor pockets of resistance still exist, but they are slowly being stamped out by the Druj invaders. While a number of people escaped, a much larger number did not. Their fate is unknown - but veterans of the recent liberation of Reikos shake their heads and look away when asked for reassurance that the people still in Dawnguard will be alright.

+++GAME INFORMATION : DAWNGUARD+++
With the fall of Dawnguard, the Barrens is now a conquered territory. As a consequence, every personal resource belonging to an Imperial citizen will have its production halved. The ritual Vale of Shadows can be used to protect a personal resource from the Druj, and may also be used to provide an in-character explanation as to how members of a household can continue to operate out of the Barrens. Any Dawnish character whose personal resource is in the Barrens may decide that it has been destroyed or conquered by the Druj by e-mailing Profound Decisions (at plot@profounddecisions.co.uk). If they do so before the Summer Solstice, they may take a new rank one resource in a Dawnish territory (Semmerholm, Weirwater, or Astolat) without paying the usual administration charge of two crowns.

There is a spy network in the Barrens; it is likely that the commander of any military unit that has been supporting it will receive more up-to-date information about the situation in the Barrens and in Dawnguard in particular.

There’s pudding (thanks, Spaced). As in I’m not quite finished with Winds of War.

You can read this one in comfort here → https://www.profounddecisions.co.uk/empire-wiki/381YE_Summer_Solstice_winds_of_war#Occupation_.28Dawnguard.29

Oh and before I forget - do please remember that the Druj are foreigners unless the Empire declares war on them, so they enjoy the protection of Imperial Law

The photograph is a lovely Oliver Facey short of some brave Dawnishfolk fighting orcs.