I’ve seen alot of people posting along the lines of:

“dont be intimidated by the pictures of people’s kit on the wiki. those are some of the best of the best costumes people have worked really hard on. Basic kit is fine and common, here is what you need…”

Now for my question, is there anyplace with a collection of pictures of people in basic kit? Did PD take some?

I feel, and I think many others would, that it’s a little mean to single out ‘newbie’ or ‘basic’ costumes. They exist, but I would feel bad labelling anyone else’s kit as ‘basic’ especially if they are new and a little self-conscious.

Now my kit, I don’t mind discussing and admitting it’s not all there. I tend to play swashbuckler types so I don’t need to buy too much new kit. Mostly, it’s about the accessories.

I have a half-cape I made and need to remake, plus a feathered hat, but the rest of my costume is pretty basic. I tend to wear leggings (Primark), one of a small selection of loose shirts and some riding boots. I will add a sash for a swashbuckler (a chiffon-ish scarf from a charity shop, of which I have a few), an extra belt (two or three belts can work, more and it detracts), plus some fingerless gloves I picked up for £3.99 on eBay.

My first LARP: (I made myself the half-cape, but the rest was shop-bought) 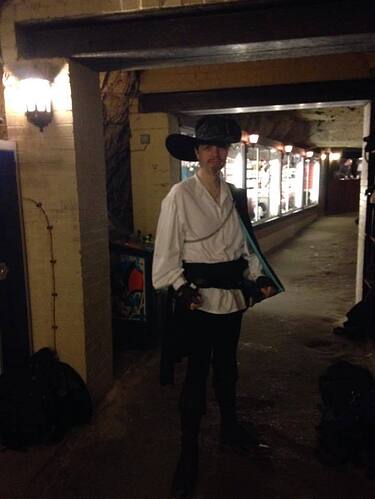 Later, I added some bracers, a sword-hanger and a bottle-carrier:

Better glasses, a £2.99 mask from a costume shop which somehow looks okay, and a jerkin which just doesn’t seem to work right: 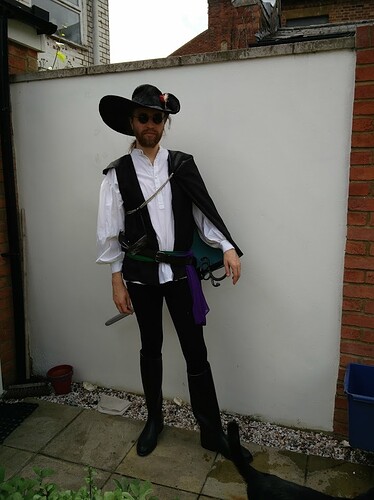 I also turn up in this album on Facebook, which shows a range of costumes:

Sorry for the necroposting, but I just got around to a breakdown of my own costume. It requires some sewing, but it’s a (mostly on-brief) sub-£50 League outfit before you start adding weapons.

I feel, and I think many others would, that it’s a little mean to single out ‘newbie’ or ‘basic’ costumes. They exist, but I would feel bad labelling anyone else’s kit as ‘basic’ especially if they are new and a little self-conscious.

I completely agree that ‘basic costumes’ are stigmatized. sorry if i came across as mean, i just wanted to show that “basic kit” was fine and provide some visual examples.

(also sorry for necroposting, i guess i forgot to hit reply button a month ago…)

Let me chip in as a new player: I for one would love to see more pictures of both new and experienced players showcasing their basic costumes, I think it would help a lot of people feel more confident about their kit if they had a better idea of what the bare minimum is. And I second your thought, @wraith33: I’d be great to destigmatize “basic kit” and remind everyone that it’s perfectly fine to have a simple but strong base for future improvements.

This was my kit basically for my first Empire event. Made the tunic and trousers myself. 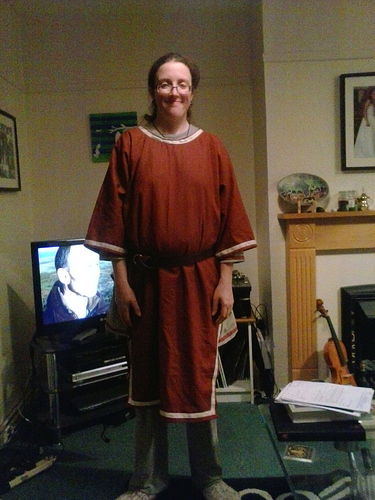 Basic Dawn kit: Basically get a tabbard (preferably either blue or in your house colours)
You can buy these for around £25-£30, or if you know how to use a sewing machine, a tabard is basically two red rectangle sown together with a neckhole cut out, and edged.
Other than that base layer of clothes that aren’t that obviously modern, no jeans, no trainers (Although Leggings or Jodpurs in the right colour would be a way to get bonus points.)

So these are two pictures of one of my friends who I got into Empire,

The one in red is from one of his first events, actually everything except the belt was borrowed, but it’s a good picture of the two rectangles of fabric type tabard.

The next event he acquired himself a tabbard in the right colour for the group, the blue one shown (although he didn’t have many of the accessories till next winter.), and now he had his own serviceable Dawn kit.

The photo in the Blue is actually a few more events down the line, and it’s a fairly good example of little additions you can do over time, he’s added a bandoleer, that he made himself to keep herbs in, and a few pouches. (He’d been playing for a year at this point) It’s a good example of how just slowly adding accessories over time can improve kit, and it shows the Continual Improvement idea that Empire has going for it.

After the character passed his test of mettle, he added a shield cover with a heraldic beast on and having worked from a really basic start, and aside from getting his own tabard the core of that kit hasn’t changed, he has a really strong battlefield look.

From having introduced new players to Empire (around 6 now) I really love the costume philosophy on the wiki. It gives a clear and achievable minimum, and encourages you to slowly improve. 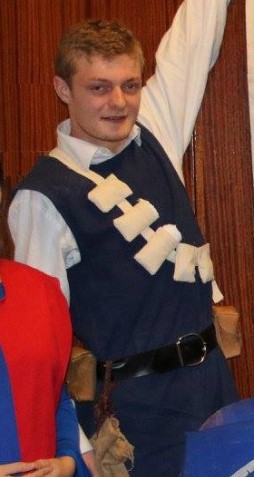 Having received permission to post about a few other new players

This is the same kit she wore to her first event, I think this might have actually been taken before her first event, again brought tabard, the scales are makeup and a stencil she found and the top is entirely her online shopping skills, I believe it was modern and reasonably priced but it is amazingly Dawnish.
This is definitely more than the bare minimum (She got quite a few compliments on her first event), but if you can find Trumpet sleeves, you can achieve a really nice Dawn silhouette for not that much, the next thing she is thinking about is adding some Trim to the sleeves (which is a great way to take the basic kit you had for an event or two and improve it.) 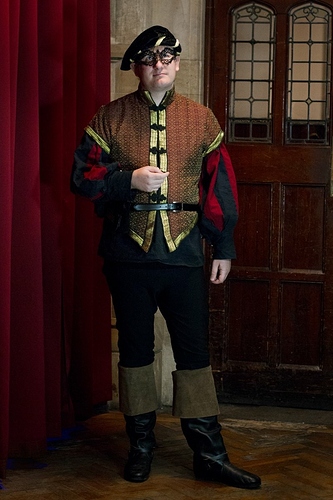 This is my second pass at League kit. It is cheaper than you’d think.

“Hose” are Primark leggings for sub £10. Landsknecht shirt isn’t too expensive - you can buy them cheap from Wish but honesty I recommend spending the extra £10 or so if you have it to get it from a UK LARP supplier as the quality and colour is a little more reliable. The fancy tunic was sub £40 from Southern Swords - I found it frayed a little too quickly for the wear I was putting it through but it would work OK for someone with fewer bags. Belt is from Tescos. Pouches bought in field. Mask and hat from eBay, both quite cheap.

The big expense here was the boots, and that’s totally optional. My first event I wore hike boots and it was absolutely fine. 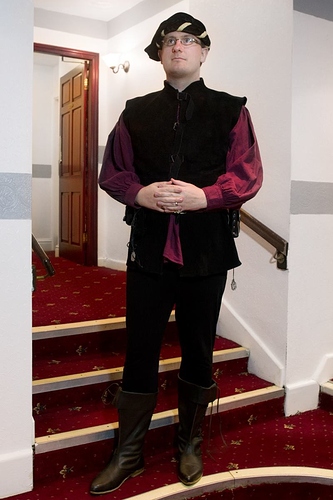 Alternative “up and coming” League kit.

Went with less decoration here to emphasise character is still making it, and not made it. Same Primark leggings. Less expensive boots. Standard LARP shirt, a couple of sizes two big - in hindsight would go another couple of sizes up. Thicker LARP tunic to be a bit more hard wearing - I think I got it from LARP Inn or something like that, but a few traders stock them. Same hat. New belt, same bags.

This is also a good example of small additional purchases to give you some variety in costume without too much expense and still clearly being the same person.

I’ll be testing out my basic Freeborn at my first Empire at the end of this month. I don’t yet have a picture of me wearing said kit, but here’s a picture of what I have so far. 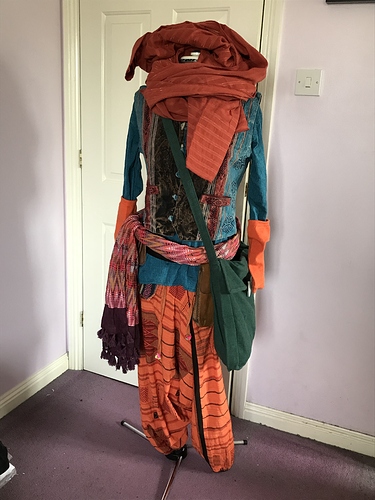 The green bag and the tagelmust/headscarf (the mass of red cloth at the top of the dressform) are the only two things I’ve purchased for Empire; I happened to have everything else already. I’ve tried to make it to the basics of the Brass Coast Freeborn brief.

I’ve been adding to my Urizen kit over the winter; thought I’d share some of the links as together they can make a really good basic kit and cost less than £40.

Other designs are available, I when for something plain rather than embellished.

Sash - £2
Don’t have a link for these; search eBay for a Scarf, they have plenty for 99p. Buy two plain ones, in a colour that fits with your scheme; and sow them together along the narrow edge.

I’ll post a photo of how these three look as a basic costume later. 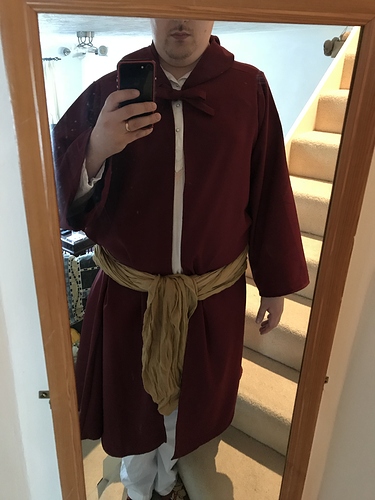 Here’s a picture of the above kit. Next steps I recommend is replacing the draw string in the trousers with elastic, this can be bought from eBay for £3 for 5meters (so still under £40h