So my friend and I have been looking into Empire for some time now. As of right now, he seems really into Wintermark. I am interested in Highguard of course as most of the armor I already have seems to fit well with it(I look like a boss at the local ren fair) and I like the style. If he is so dead set on Wintermark I would end up joining with him of course(best friend so I can’t really help it) so I was wondering what would I have to get/ditch in my current gear to make me fit in with Wintermark a bit more?

Alternatively, if I can convince him to join me in Highguard, what might be a good thing to add?

I already know I need to get a form of torso armor and I know that I need to ditch the cross. Any help would be appreciated. Thank you. 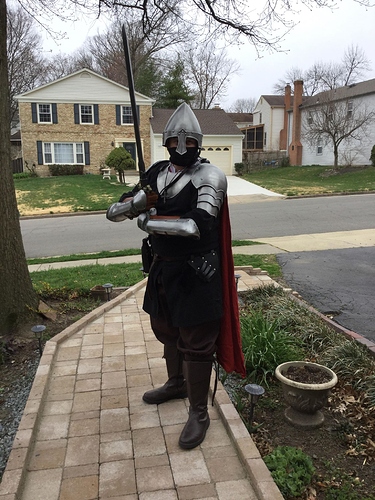 So for highguard, honestly get the torso armour, you have a really solid core highguard look there, and it means that if you found a group in play you could then improve that to fit in better with them

Other than that practical things if you don’t have them, drinking vessel, IC notebook and Pencil. And if you do have them get a small bell.

By contrast wintermark would take a lot more work, because of how Highguard your kit is. Getting chain and removing some of the plate coverage (The Pauldrons and the helmet), and add some colour for the outside of battles.

Depending on what appeals about Wintermark to your friend, Dawn might be a compromise choice, and basically all you would need for that is a tabard in a brighter colour

I do have a water bottle styled to fit the look. But why the notebook and small bell? I have not heard of that before.

So the helmet and the spaulders don’t work at all then? Dang. I’ll definitely have to look at some other kits then to figure out what to do.

notebook is needed for almost any character in empire, as you will need to keep track of the politics, prices, rituals, recipes and names of anything your character needs to deal with, and unless you are an absolute genius at memory games you won’t hold it all in your head!

The bell is Highguard hearth magic, to us if you ring a bell it will ward away any unquiet spirits. It’s one of our things along with covering the head with a cowl or veil if doing anything serious, and hand washing/ cleanliness.

Gotcha. That is pretty cool. Thank you for the information.

While you can’t have multi-nation groups in Empire, what about both playing the nation of interest and having a reason to interact? There are cross-nation organisations such as Conclave orders and Virtue assemblies, or just have a background link like being related. My character has always spent more time with Conclave friends than nation friends, which was not intended at character design. This is best if you can both find groups to go into in your respective nations.

Go to the event together, at time in split up and play the game you both want to play.
Maybe plan to meet for breakfast but go nuts. And know there is always a friendly face OoC on the field, it matters, but not as much as you think.
Both of you find groups in nation/cross-nation to get a grounding and at the end share awesome stories. Even being in the same group you can spend a surprising amount of time apart chasing leads and story. Write into both of your backstory for a reason to know each other and come looking for him.
There is little more fun finding your mate on the opposite side in a battle. Really makes you want to go all out and chew the scenery, be the largest ham and make a huge spectacle.

I’m sure we would probably find different things that interest us during the day(I am interested in the religious aspects and he is interested in trading) but that would pose a problem at night since the intent was to camp in character. And also it would mean we wouldn’t go into battle with eachother(unless I missread the rules).

Really, splitting up would be our last option if we can help it.

It’s perfectly fine for two people of different nations to share a tent at night in-character. People do it. But, yes, you would only be fighting the same battles if your nations were, and even then you’d be fighting with your nation.

Sharing a tent with people from another nation isn’t an issue usually. Generally after time in you spend very little time wherever you sleep, and where you have dumped your luggage is not very relevant.

I’ve hosted other nation’s people, although in both cases after a couple of events they found alternative accommodation with their new nation mates just for convenience if nothing else.

Oh alright. Didn’t know you could do that. Thanks for clearing that bit up for me. The battle part is still an issue but at least we could still invest in the tent together(pool our money for the camp and all).

also depends if you are planning to sleep In the In character area with a canvas tent or the ooc area with any sort of tent. If the latter then it matters not at all what nation you are in.

Not sure if it will for him but when he gets back from holiday, I’ll ask.