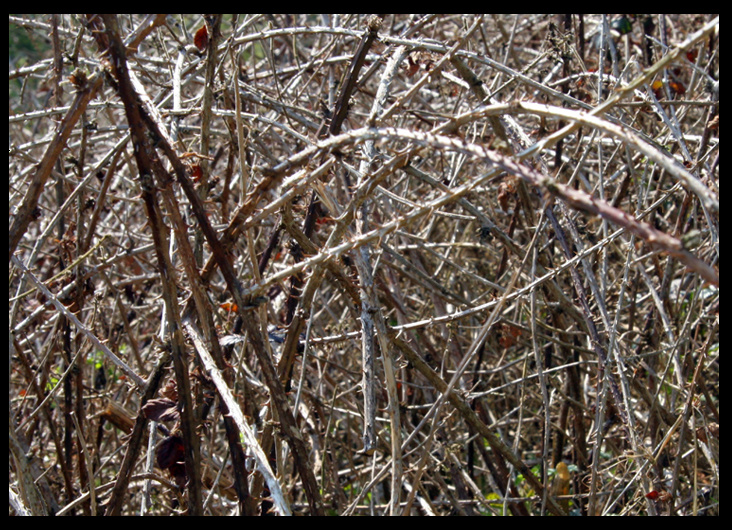 The two heralds sat crosslegged in the bramble patch. One cradled a small child in her arms, gently rocking it. The other sat close by, full of energy, buzzing with questions. Much of the conversation was unspoken, sentences trailing off unfinished but still understood. It was a communication of knowing glances, and gestures, and deft touches as much as words.

“The Mourn, they did what in the Mourn?” She jumped up, and pulled a small doll of sticks and brown rags from her bag, covered in mud rich red mud. She hung it on one of the large brambles that arched over their heads, alongside a dozen other similar little woven dolls.

“Posion and curses, like that time…” The baby snuffled, and she rocked it more gently, cooing softly.

A gust of wind caused a branch to lash out, snagging the herald’s skirt. She looked sober for a moment, disentangling herself with deft fingers. The briars above their heads whispered and twisted one way and another despite the lack of wind.

“He said he couldn’t promise that they wouldn’t do it again.” The baby chuckled, closed its eyes.

The standing herald touched her companion on the shoulder, showed her where the doll of mud and stick hung. They shared a smile. With clever fingers, the heralds wove another little rag doll together, sharing the task, as the baby slipped into a deep slumber. The standing one hung this doll beside the others - small and red, seeming to dance on the thorny branch in the dim moonlight.

“Fallen.” the smiles turned sad. “But the people …”

“Some, yes. With the orcs” The sadness drained away. Then the sitting herald frowned, stroking the child’s head with one long splintery finger. "But the Imperial chieftans chose another to talk with the Dusk Tyrants … "

The brambles twisted and shook again, and a noise came from the undergrowth - the growling hiss a rabbit might make when distressed. The two heralds paused, listening, as the noise faded. Somewhere nearby there was a fluttering of wings, as of a small bird, and then silence apart from the gentle creak of wooded, growing things. They nodded.

Another growl and a grunting muttering sound, amid the rustling of the briars. The little dolls danced on the branches.

The standing herald studied their movement, looked quizzically at her companion.

“They are new. I’m sure their heart’s are in the right place…” said the seated herald.

“… he can help if they let him.” finished her companion. She frowned. “Will they let him help?”

“Perhaps.” The two shared a significant look. “Perhaps not.”

The standing herald helped the other up, careful not to wake the child, and they moved out of the little cave among the brambles, setting the dolls twisting and dancing in their wake.

Plenipotentiary! There are three formal requests for parleys from eternals, three open responses that seem to be the results of Archmages using their power to request a meeting.

You can find out which ones by reading about them here → https://www.profounddecisions.co.uk/empire-wiki/Rabbits_and_snares