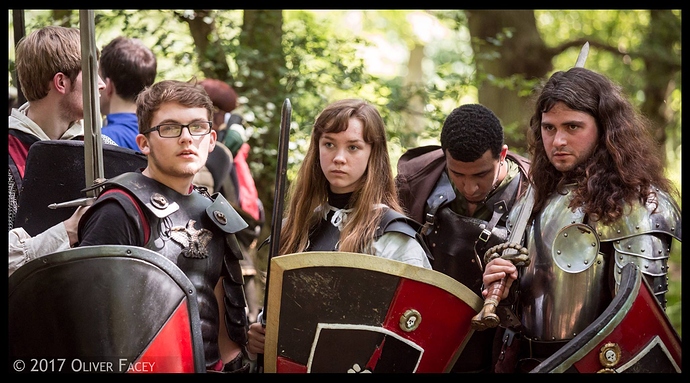 Across Zenith, spires are winking out. The Spire of Celestial Cascade and Echostorm have both disappeared behind shrouds of night magic, as have several of the smaller spires, even those not in immediate danger of being overrun. Others are not so lucky. There are scattered, horrifying reports from those spires the Druj now dominate - and the dreadful fates met by those who resist.

The Druj invaders have taken Lustri and Occursion and they come pouring down out of the hills and woodlands to sweep across the plains of Proceris.

The tide of orcs is met by a wall of dark steel. The Valiant Pegasus, the Granite Pillar, and the Seventh Wave are waiting, offering their strength to the people of Urizen. There is a fire in may Highborn soldiers to fight the Druj - especially those who saw what they did in Reikos, and to its people.

The Pillar takes the lead, coordinating the other two armies and those forces belonging to independent captains. Along with the Wave bear the brunt of the initial attacks, holding firm against the initially disorganised Druj assault. The Pegasus serve as a firm bedrock, supporting and protecting the other two armies. The Highborn apothecaries and healers are well prepared for the venoms and poisons employed by the Druj, as well as the more usual mortal wounds and crippling blows.

After the initial assaults, which are handily repulsed, the main force of the Druj is brought to bear. The Black Wind leads the way - orcs out of the Barrens once rebellious and now bound again by the Druj. They ape the other eastern orcs, but their cruelty is something to behold. It is as if they wish to prove their loyalty by being even more merciless, more ruthless, than the Druj themselves. Any Imperial that falls into their hands is crippled, tormented, and ultimately crucified left to die slowly of their wounds, of hunger, and of thirst. Several spires are turned into unspeakable charnel houses, every person within heinously butchered. They drive crippled and broken survivors before them, calmly picking them off with arrows before they reach the safety of the Imperial lines. They are cruel indeed, and once it is clear the true depths of depravity they are capable of, it shakes the confidence of all save the most resolute Imperial soldiers.

Furthermore, the Black Wind possess a supernatural strategic excellence - with a sinking feeling some of the Highborn who have fought the Grendel in Spiral recognise hints of what is occurring. Whenever the Empire accidentally leaves itself weak, the Black Wind assault them there. When the Empire seeks to trick the Druj into overextending themselves, the Black Wind pull them back. Their general - a vicious female orc - exercises iron control over her troops backed up by a potent enchantment woven of day magic. This is not the only sign of Grendel involvement - there are reports that Grendel mercenaries may be supporting some of the other Druj armies, although details are scarce at this time.

This is Urizen, so it is no surprise that this is not the only magic at work here. The magicians and sentinels of Urizen gather in Clypion in a citadel of black ice - a great squat tower with a wall of razor-sharp granite, drawn from the realm of Summer by the Blazing Sun coven of Highguard. The great echoing halls provide a valuable base of operations, and a focal point for the residents of Zenith to take refuge from the invaders.

A second citadel squats in Lustri - a great sprawling mass of trees woven into the rough likeness of a castle. Ghulai are said to lair here, and high value prisoners who survive the initial Druj lust for blood and torment are sent here to have their secrets torn from them. How many Urizen magicians have been sent into the forboding fortress, and how many have gasped out their last breaths begging to be allowed to unburden themselves of their magical knowledge, it is impossible to say.

The entire territory is also wrapped in a web of powerful Autumn magic, woven by the Grape & The Grain coven of Wintemark. The magic is of great value to the peole of Urizen, guiding them to safe paths clear of marauders, helping them to rest safely, and giving preternatural awareness of the location of those who wish them harm. It directly helps hundreds of people in the war-torn east of Zenith make it to the safety of the west. It also aids the Highborn defenders - alerting them to the presence of the Druj and providing valuable protection from their ambushes. Unfortunately, the magic is indiscriminate - it is just as effective at helping the Druj armies, and at forewarning the orcs against Unconquered scouts, as it is at aiding Imperial citizens.

At first, the two forces - Highborn and Druj - appear relatively equally balanced. As the campaign progresses though it becomes apparent that the Druj have the upper hand. While the Black Wind seem most interested in kindling a spark of terror in Imperial hearts the rest of the Druj - the true Druj - achieve something similar simply through relentless, unstinting commitment to violence. Overwhelming assault after overwhelming assault breaks against the Highborn lines and despite their best efforts they are slowly forced back.

But their retreat is measured, and careful, and disciplined. They fall back a few miles at a time, always to new positions prepared by the Granite Pillar with the aid of the Urizen civilian population. Thanks to their resolute courage, spires that would otherwise have been washed away by the oncoming tide are able to evacuate in good order. Many have time to secure their magical lore, or carry it with them westward to the Halls of Knowledge, or to the welcome of spires in Iteri and Clypion.

Over a thousand Highborn soldiers give their lives to secure this evacuation, and to hold the Druj back. If not for the Summer magic granting protection to everyone in Zenith, this number would have been much higher. It is hard to guess at Druj losses, but the Urizen prognosticators and the Highborn scouts alike agree that the Druj have lost similar numbers of orc lives.

The Druj gain some territory, it is true, in their slow advance westward - but if the Highborn had not been present they would have conquered the plains of Proceris and likely put the Halls of Knowledge in Clypion to the torch.

You can read the neater version here → https://www.profounddecisions.co.uk/empire-wiki/381YE_Autumn_Equinox_winds_of_war#Resolve_.28Zenith.29
The Druj have made some gains in Proceris, but not enough to claim the entire region. This may have some implications for the Freeborn in Spiral, if the Druj manage to capture the Twilight Gate.

The Imperial forces are left in no doubt that the Black Wind army possesses the Cruel quality, and has been engaged in a Merciless Onslaught. The Highborn armies will break if their military strength falls below 1,500 (or below 2,250 if they are large) before the end of the Autumn Equinox.

Also causing concern - the civil service are extremely worried about what will happen if the Druj take Proceris, especially the Golden Cascade - a series of terraces carved into the foothills and supported with powerful ritual magic and unique polished mirrors. Along with the fertile farms on the plains, the Golden Cascade provides much of the food for the people of Zenith - and is a significant contributor to the nation’s ability to support the Citadel Guard. Losing it is unlikely to cost the Urizen their ability to support their army, but it would certainly place them in a precarious position.

It is expected that Auditor of the Imperial Treasury Gerard La Salle will be available to answer questions about both topics during the Muster.

Its an Oliver Facey picture of some young Highborn. My sources suggest it is Storms Fury and at least one member of the Epic Four.