New Player here with question regarding shields in battle:

It comes down more to your style. Some nations use shield walls alot, Wintermark, Varushka, Highguard and Dawn,
Some dont and use more spears and halberds, The League, Marchers, Navarr, Urizen,
And some are just a running wall of death swinging what ever comes to hand. Orcs and Brass Coast.

But more importantly it is your own preference. Pole Arms, Great weapons, Ambidextrous have just as much a place as Sword and Board. They have different uses.

Whatever nation you’re in there’ll be a place for you whatever you’re armed with (although if you take the field armed with a larp-safe frying pan you may not get taken seriously).

My personal preferance is sword&board (arrows, parrying, displaying my heraldry), but as Mr Haystacks says, there are a few national trends but it’s pretty much whatever you have…

What nation are you likely to play?

I’d advise trying out a few weapons combos, seeing,which one(s) you’re most comfortable with, and going with those. Do this by borrowing weapons off friends for a bit of sparring, before investing in a shiny phys-rep that you go off.

Note that Shield Use (as opposed to bucklers) is a character skill, costing 2 points. This is quite expensive. On the other hand, if you decide you later want Shield Use, there is also a natty magic item call Green Iron Bracers, which grants you the skill (while you have the bracers on, obviously). These get made fairly often, so not taking the skill at character generation is hardly irrevocable.

Hand weapon and shield is generally speaking the most easy to access combat style. You get to hit stuff with the sword/axe/hammer/morning star and you get to stop yourself getting hit by other people’s stuff with the shield. Winning all round.

But… you don’t get the niche fun of the weapons that come under the ‘Weapons Master’ skill. You only get to use the ‘cleave’ heroic call, which while useful is certainly not as day-ruining for your enemy as impale or strike down.

I use a great weapon in battles as my character and part of me always misses the ability to get more stuck in that a shield gives you.

What nation are you playing/intending to play? Like the others have said above, some nations have shields at the centre of the military brief, while some don’t. So one question to ask yourself if whether you want to conform in a shield heavy nation, or stand out in a shield light one?

I suppose I’d summarise by saying that shields are great, and definitely the most sensible choice in battle, for the compromise of offense and defence, but they are not necessarily the most exciting option. If that makes sense…?

Thanks for the advice.

Have joined Highguard - which I believe are shield wall focused?

Therefore would you recommend a shield for Highguard?

For Highguard? Heck yes. The groups there have some lovely specially made shields, so you may want to ask before you buy the phys-rep, but buying the skill is a sound investment.

Excellent choice on nation, if I say so myself…

The majority of shields in Highguard are heater or kite style- think early middle age crusader and you won’t go wrong. Some are more historically faithful, some are a little more fantasy, all are appropriate to the brief. Good news is heater shields are easy to get hold of and plenty of traders makes them so you can shop around. If you by a shield off the shelf then the simplest way to jazz it up is to have a canvas cover with your chapter sigil painted on, nice and big. Oh and buy a cheap long leather belt from a charity shop and loop it through the handle to use as a shoulder strap. It’s all about style and nothing says business like a large shield nonchalantly slung over your shoulder.

I think you’re at a big disadvantage if you use only one hand in battle.
So, you could use both hands on one of the larger types of weapon (in which case look at the relevant heroic skills for doing more harm with the weapon) or you could use two hands for two items, e.g. one-handed-weapon and buckler, onehander and shield (with “shield” skill), or two onehanders (with “ambidextrous” skill).

Most people fare better with onehander and shield than with two onehanders (there’s a reason it was more common historically) but some people have the knack of fighting well with two swords or whatever. Remember you’re not allowed to parry arrows with weapons though, only with shields. (This is because of the risk of the arrow being knocked into a spin and hitting someone with the pointy back end.)

Remember that the one handed spear exists in weapon master if you want to be doing other calls than cleave. It is not an easy style, but with a stab safe spear and some good balance, you get some superior reach over those closing in on your shield.

Also true but it does limit you to only stabbing.

Just for reference there are two styles of fighters in Highguard, Shield using Cataphracts and similar and Unconquered who use a mixture of arms, their philosphy is “whatever works” and are more fast moving skirmishers than shield wall.

So don’t worry if you can’t afford a shield right now and have to borrow a buckler, they’ll be people you can fight with.

A shield is big and clever if you like being alive and don’t have someone with a shield looking after you. Yes, you can take a polearm or bow and stand behind the shield wall, but I have played in a few LARPs and fighters with shields die slower than those without in 90% of cases.

I don’t own a shield though…

A shield is like armour; it keeps you alive when someone is trying to hit you, but it also slow you down. The effect is most pronounced in cramped conditions like caves or undergrowth, but there is a reason why shield walls retreat in unison. Turning with a shield works best if you have a foot or so of space on either side.

A shield also takes up your off-hand. I’m not even talking about dual-wielding, just moving a branch or getting up off the floor is harder with a shield. On the front line, it’s probably the best use for an off hand, but think of any secondary skills like healing or magic or anything you want to do while you are not toe-to-toe with orcs.

I have no shield, so that affects my role in battle. I avoid the front line, I use a healer’s kit, I run like the wind when the shield-wall starts to fail. Had I a shield, I might not even be able to run and so I would wear plate, I would stand and fight, I would let the healers worry about healing.

Halberds and Spears are great fun to use due to the reach and realistic (for larp) fighting style.
Also the reach means you dont get as battered as much and no one wants to march into that hedge of points to get close enough to hit you.

Shields excel in defensive formations and in 1v1 combat against most weapons, being probably weaker against people armed with dual swords or similars.

While in battle, if you have a shield you will be expected to stay in the first line of combat. Your job will be to help forming the main battleline, protect the spears and projectiles behind you. you will be the first and the last to get into battle.

ADVANTAGES: Great protection, strong position in formations, a pilar of any working army.
DISAVANTAGES: Will slow you down, making retreat more difficult.

My character goes to battle both with sword + shield AND with a mage staff. I use this combination to change and adapt as the battlefield changes.

Also, I’m curious about how you carry the thing(s) you’re not using at the time…

Right that was typo hahahaha. I meant only “staff”.

I do put my staff on my back with a rope while I use shield + sword. And if I need the staff, I hang the shield on my hip and carry on,

is it a buckler shield? also, how do you attach the staff to rope and then your back? ho big is the staff? (woops, a lot of questions

Here, have some photos 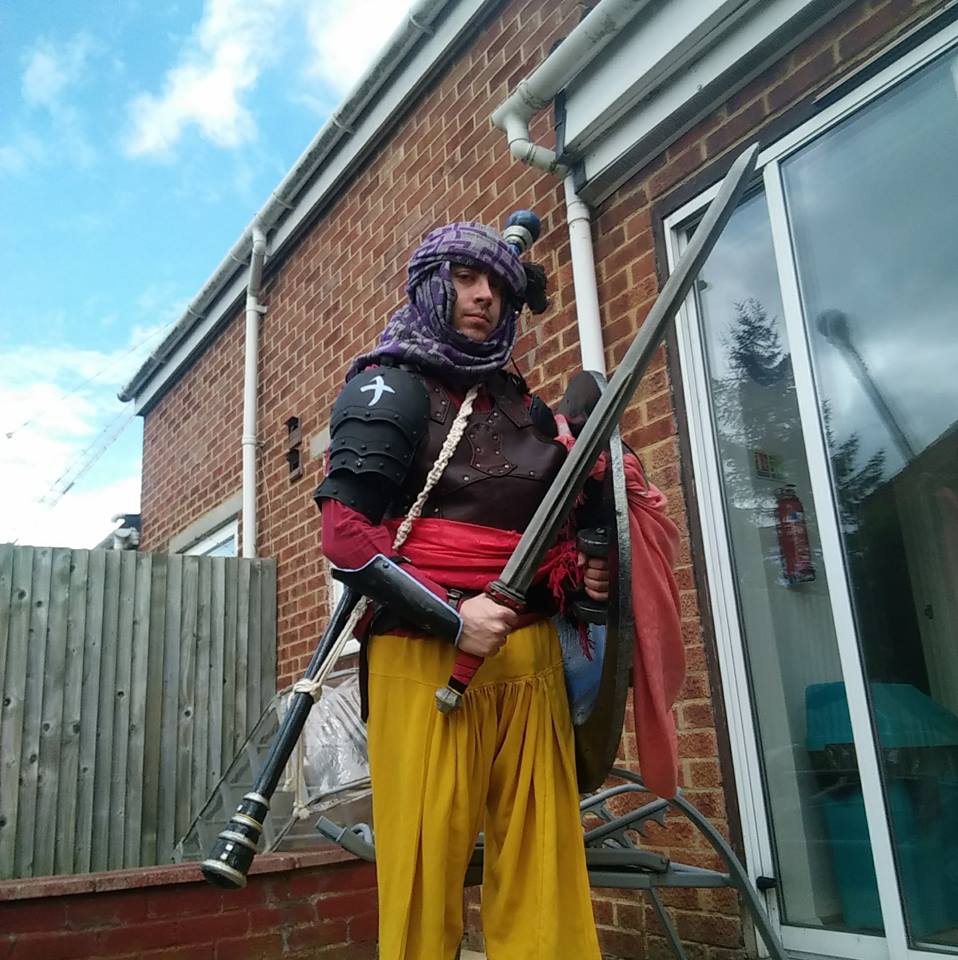 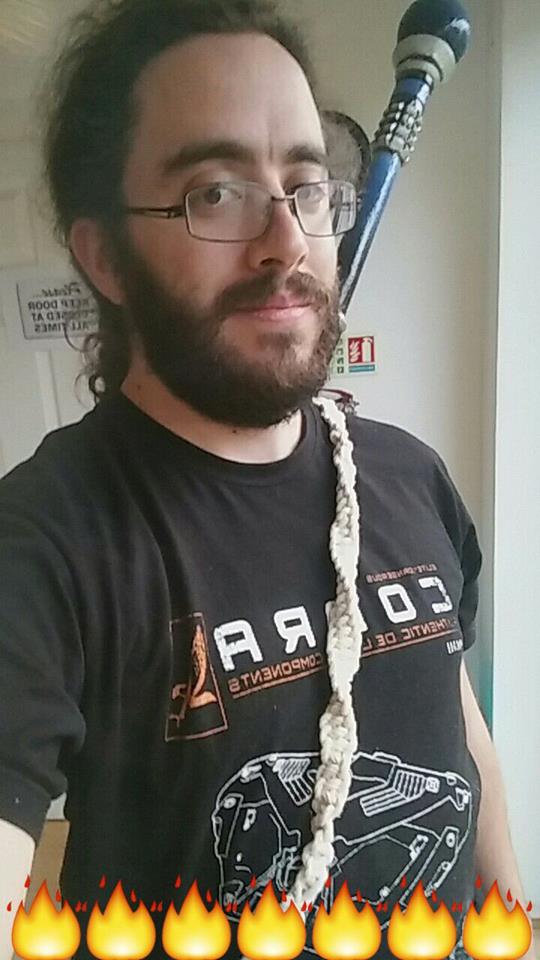 I made the rope myself with some macrame patterns. It is quite easy and entertaining!

I just use a long leather belt to strap mine to my back… and just swing it and hold it if I need to get in a line in battle. Works great.