Wanting to pick up some heavy armour now that I’m doctoring on the field; and given I’m rather fabulous I wanted to pick up some thematic pieces, and something suitable for wearing around with the League.

Does anyone know where I can source:

Gold Muscle Cuirass (Musculata)
Happy to grab stock, or commission if you know chaps who can accommodate it; I’m sure Odyssey users would be of assistance in this regard!

Or is it possible to get some sort of overlay or leather muscle bodyform to overlay on a metal breastplate?

Steve Lunn of White Rose Apparel is always worth a talk to if you want fabulous metal armour and he does leather work too.

Re: the skull mask, I was actually in a similar situation to you! Given that I’m probably going to be signing on with the League for my first Empire experience in E5, I’ve been putting together some speculative kit, including a metallic mask. I know you said you’d rather source it than make it - it’s just I’ve had great fun making mine, and (after a bit of work) found a way of making masks that works pretty well. I hope it’s helpful!

The first thing I set about making was a cast of my face/head - it’s useful as a guide to get the proportions right, and helps give something to work around. Modroc/plaster bandage facemask (a bit icky to do, but not too bad if you take care/follow this or a similar set of instructions). Then, once that’s dry, dump a whole lot of cement into it, and let it harden - once it’s done, you can peel the plaster bandages off, leaving you with a concrete impression of your face: 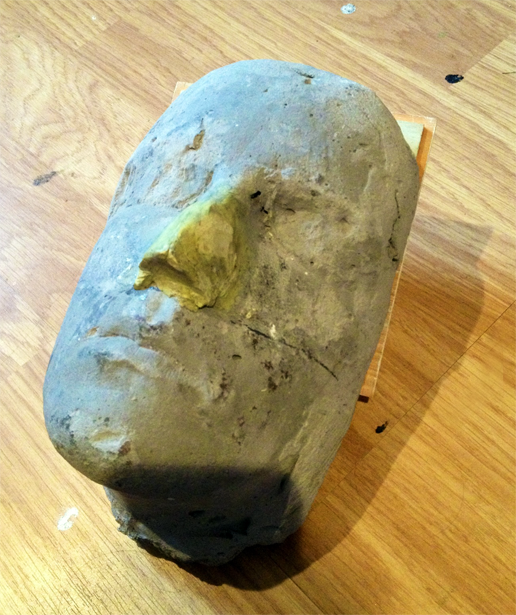 I recommend trying to source some particularly hard concrete/cement for this - I went with the usual quick drying stuff, which is fine for most purposes but can start to crumble if you begin going at it with a hammer. As you can see, the brow line is beginning to disintegrate, and the nose had to be rebuilt (rather more pointily) entirely!

Once you’ve got this, there area few options for making the mask. Covering the model in tin foil and building the mask up in epoxy works pretty well for ceremonial masks (e.g. this, but it’s not very sturdy, and wouldn’t work as armour. I’ve been going with 1mm copper for my half-mask, which is just about soft enough to hammer it cold (I reckon very thin brass sheeting would work to give you a decent gold look), although, as you can see, it’s not very smooth :(: 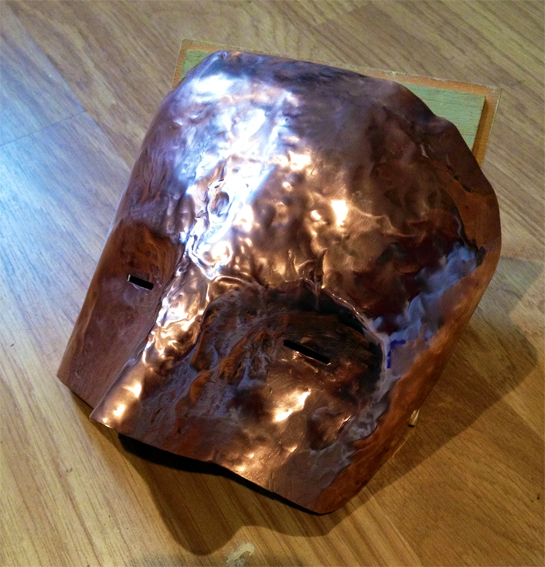 As good as I could get it without a blowtorch to anneal it! By going through an entire pack of wet and dry it’s possible to get the worst dings out of it though - when I get round to decorating it later, I should be able to distract from them.

For your skull mask project, if you were going to make it yourself, I imagine the same approach would probably work pretty well - cutting out the nose piece from your mask, adding vestigial jawbones + teeth, and you’d look pretty terrifying, and suitably doctor-y!

I’d say however you are a way off being able to sand it to get rid of the dings, really at this stage you need to start planishing it. You should be able to planish it from that state without further annealing, especially as its copper.

Normally I’d recommend getting a trailer ball hitch (cheap planishing stake) however to planish around the upper nose area you might need a much smaller stake (myself looking at it, I’d try planishing it over the bick of my anvil).

Try contacting the Iron Dwarf (based in Northampton, and traded at E1, 2 & 3) his stakes (and anvils) are rather cheap.

I’d say however you are a way off being able to sand it to get rid of the dings, really at this stage you need to start planishing it. You should be able to planish it from that state without further annealing, especially as its copper.

Normally I’d recommend getting a trailer ball hitch (cheap planishing stake) however to planish around the upper nose area you might need a much smaller stake (myself looking at it, I’d try planishing it over the bick of my anvil).

Try contacting the Iron Dwarf (based in Northampton, and traded at E1, 2 & 3) his stakes (and anvils) are rather cheap.[/quote]

Yeah, by sanding out the dings it’s more an issue of getting nicks and scratches from hammering it. I’ll look the Iron Dwarf up - the whole thing’s made out of scrap copper using whatever materials I have to hand (the closest I have to an anvil is a large wooden post!), so recommendations for cheap stuff would be great! Getting round the work hardening ought to be good exercise, at any rate.

Ok, quick improvised planishing stake, which might work in your case.

Take a decent sized ball peen hammer, and trap the hammer VERY firmly in a vice, ball peen up. There is your planishing stake.
Then use a nice polished flat face hammer and start work.

Its not pretty and its far from perfect, but if you have the spare hammers it might work for you. Experiment.
Be aware however, most ball peens tend to have a slight point to them, while a good planishing stake is more rounded.
If you can select a ball peen with as wide a radius as you can manage, or grind it to shape. It’ll help.

If you have 1/2 inch bar and an angle grinder, then you could fashion some small stake like tools as well.

But if you have a stake and a hammer, I swear to you that you would not need to use any sanding paper at all, indeed you can get a fantastic hammered finish by planishing alone.

Where abouts are you based?

The problem I have with making such a piece, myself, is that I work 6 days a week, and do 8-8 shifts~ While I can get a cast of my face super easy (I live with an Empire crewmember) it’s certainly just more convenient for me to have it produced. Though thank you for all the information you have provided, I am absolutely sure that there will be people who come across this post and will follow it!