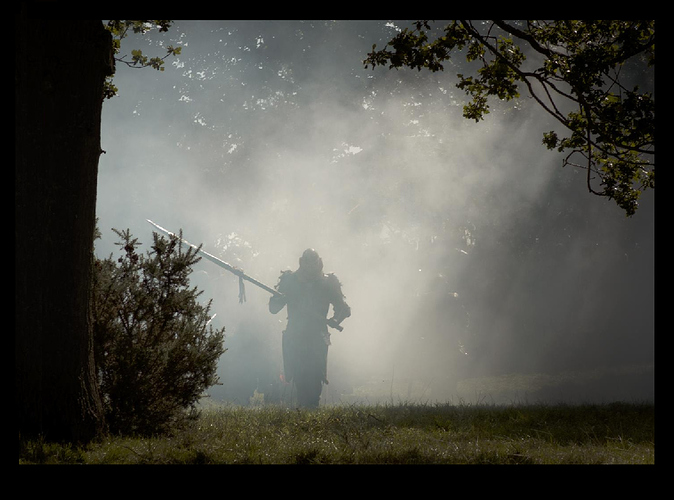 A week after the Summer Solstice, the Druj invade Semmerholm. They come across the border into the wild woods of Axmure under the cover of darkness. Several of the secluded manor houses there have already fallen to the orcs before a few survivors manage to escape and raise the alarm. A week later, the main body of the Druj march up the Drycastle road, pushing north and east toward the Gate.

While the secluded manors fall quickly, it is the manners nearer the road that perhaps meet a more ironic fate. Many had given succour to refugees from the Barrens - only to find that following close on the heels of those refugees were the Druj themselves. Some who had escaped the fall of Dawnguard are caught by the Druj, as if fate itself had marked them for death.

As in Dawnguard, the Druj do not seem to be going out of their way to slaughter the Dawnish who fall into their hands - unless they try and fight back in which case they are mercilessly dispatched. Many do try to fight back - but the scattered and disorganised nature of the noble houses of Axmure works against them. Banners are raised bearing the golden boar’s head of House Rylas and the white tree of House de Lusignan, but they are utterly outnumbered by the Druj invaders. Only the locations of their manor houses deep in the wild woods provides any real protection from the orc armies, and they are soon forced to fall back.

Axmure is effectively conquered in less than a month. Those manors and villages too stubborn to flee soon fall to the orcs. Those who do flee head along the road toward the Gate, toward Holberg … with the Druj are hot on their heels.

The Druj do not pause - while some of their forces are consolidating their control of the southern woodlands, the bulk press into Estmure. There they encounter their first serious resistance - the garrison of the Gate. Supported by a single unit of men-at-arms belonging to House Cordraco, a scattering of Imperial Orcs still living in Estcastle, and a poorly oganised yeoman militia raised to try and keep the orcs at bay. The militia are quickly dispatched, their agonised screams persisting over several nights before they finally, mercifully, fall silent.

For the most part, the Druj are not especially cautious - but neither do they charge recklessly at the walls. Many of their weapons are envenomed with lethal poisons, and they also make use of herbal preparations to grant strength and vigor to the warriors who assault the walls. They largely ignore the manors of Estmure, for the most part focusing all their attention on the fortification.

As the main force besieges the castle, raiders spread out across Semmerholm, attacking indiscriminately, sowing terror and confusion wherever they can. There are reports of Druj guerillas as far west as Rucastle, and in the vicinity of Semmer’s Rose in the north. Fear grips some of the yeomanry - made worse by the stories brought out of Dawnguard by the fleeing survivors. An Imperial orc trader is lynched in a small village near the Semmerstones, mistaken for a Druj spy. While the miscreants are immediately arrested, the woman is still dead.

Like the people of Dawnguard before them, the folk of Semmerholm do their best to resist the Druj advance. The noble houses begin to rally their colours - the emerald and silver of House Devereux; the orange, gold and white of House Ossienne; the green, sable, and argent of House Tamerlaine; the green, gold, and-silver, and the red and black, of the Axmure houses. Despite their best efforts, they are scattered to be effective - although raiding parties can be turned aside or defeated, they cannot quell the irresistible force of the Druj armies.

The Gate holds against the Druj for a week, then a month … hope begins to rise that it will stand long enough for the Empire to arrange a response … only to be dashed. A fortnight before the Autumn Equinox the gates are finally breached. There are confused reports of a crippling poison introduced into the well of the keep under cover of darkness - and very reliable reports that the Druj butcher every soldier who does not flee, even those who in their desperation try to surrender. They hang they bodies on the walls and along the road just as they did at the Towers of the Dawn. The head of the garrison commander is mounted on the flagpole atop the central keep, and the ruined castle set alight by the victorious orcs.

Again, it seems that the Druj expected more resistance - their initial approach is much more considered than in the Barrens. While they have destroyed the Gate, and conquered Axmure, the ruins of the Gate represent the sum-total of the land they have conquered in Estmure. The fortification may have fallen, but it occupied Druj attention and forced them to deal with it - now they are free to turn their attention to the undefended settlements in the west. If nothing else changes, it is likely that both rugged Estmure and wealthy Lacuve will fall to the orcs in the coming seasons - assuming the Empire is lucky and they do not conquer even more territory.

I’ve just had my lunch, so here is our last Wind of War as promised. You can read it on the main wiki here → https://www.profounddecisions.co.uk/empire-wiki/381YE_Autumn_Equinox_winds_of_war#Summer.27s_End_.28Semmerholm.29

There’s also a short section on participation if you are a character whose personal resource is based in Semmerholm.

There’s one last Winds of War themed post to go - the Major Conjunctions - but that is all the major events covered.

There will now be another short interlude while we prep Winds of Fortune which will detail the events that are a bit less to do with campaign armies. Watch this space.

This is a photograph of an orc in the mists. Is it a wicked Druj orc advancing on an unsuspecting orphanage? Or is it a bold Imperial Orc out of Estcastle prepared to give their life to rescue a bunch of orphans? Either way - it being an orc you know that there are at least another half dozen of them just out of shot.