++TWO TALES++
+++TALE 1 : NOTHING WILL HOLD+++
As the Winter Solstice approaches, bitter winds blow down from the ice floes of Sermersuaq, cold enough to freeze a hunter’s breath to their face. Only the hardiest travellers are abroad in such conditions - or the most determined hunters. A few pass over the ice seeking seals and bears to provide for their halls, one last hunt before the worst of the winter storms begin. This brave handful of hunters are the first to spot the signs, and they hurry quickly southwards to warn their people.

The Jotun have come, and they have come in force.

Sermersuaq has been relatively peaceful these last three years - even while other territories in the Empire burned - but no more. Oh the western orcs have made their raids as always, and the business of the hylje prince and his skin caused some disruption, but not since the Senate made peace with the Thule three years ago has a threat like this entered the ancestral homeland of the Suaq.

At first there is incredulity. After the crushing defeat inflicted on the Jotun in the south, few expected them to come again in force so soon, and certainly not here. Not now. Sombre orders are given to the icewalkers and the scouts to spy out the approaching forces and asses the scale of the threat. Several tense days pass before the first news is brought back, stuttering words from exhausted men and women, and short notes tied to the legs of crows.

All the reports confirm there is a significant Jotun force in Stark. Significant… but not sizeable. Perhaps fifteen hundred Jotun warriors - surely no more than that. Not an army; no commander would be mad enough to commit an army so depleted to war against the Winterfolk. They march under a blue banner with a leaping silver fish emblazoned on it. An unusual device for the Jotun, whose totem beasts are usually more savage. They move cautiously - even allowing for the rough terrain and the poor weather - but they move with with purpose. One keen-eyed scout, an old woman experienced in the hunts of war and peace alike, notes that the force seems to be entirely composed of warriors drawn from the Jotun kirkja. These elite fighting soldiers would normally represent a force that formed the backbone of a Jotun army - or a band of champions that might move swiftly to reinforce one.

Each day the certainty that the Jotun have a purpose grows. Scouts report heavy wooden bridges constructed across two narrow waterways. The Jotun have scouts of their own out, mapping out routes across the ice floes and pathfinders charting the best courses over the glaciers. There is news of temporary fortifications being erected, of large caches of supplies coming up behind the Jotun. The conclusion is unmistakable - these Jotun warriors are preparing the way for an invasion. This kind of sophisticated military operation is not easy to organise and implement - but if unchecked it would be a huge asset to any invading force, potentially meliorate the normal challenges facing an army attempting to create a beachhead in a land like Sermersuaq. It seems they have learned lessons from their attempts to invade the hallowed marshes of Kallavesa. There they trusted to their strength alone to carry the day - this time it appears they have adopted a far wiser strategy. In truth it is hard for the canny Suaq not to approve of the sense of it.

The Jotun warriors do not shy away from battle where the Wintermarkers offer it. There is no major military presence in Sermersuaq, but there are more than a few warriors prepared to test their mettle against the western orcs. Jotun champions and Winterfolk heroes clash, and neither side holds back. Blood splashes across the ice floes, and stains the glaciers, blood spilled on both sides. Any Suaq, Kallavesi, or Steinr who falls before the Jotun is interred beneath a barrow mound; there are unconfirmed reports that those who surrender are offered the Choice as they have been since time immemorial - but those who make that choice are swiftly sent west to Tromsa, to Skallahn, and perhaps further west.

A handful of Winterfolk who have returned home to Sermersuaq after serving with the Imperial armies are certain they recognise the flag - these are the Ice Fishers of Ldansk, a bound fellowship of minor clans and lesser Jarls who have fought the Empire in the south several times beneath the banner of the Fist of Ulven. They are experienced, doughty warriors and while they may not have numbers comparable to an Imperial army, they smaller size gives them a manoeuvrability that even the Fire of the South or the Black Thorns would envy.

As the Solstice draws closer, this expeditionary force moves slowly southward through Stark until they camp barely a day’s march from the village of Rest - the little settlement built at the meeting point of two trods. One of the northernmost settlements in the entire Empire, it is also the site of the welcoming fires of the Last Lantern, the Navarr wayhouse farthest from the heart of the Empire. The Navarr and the Suaq scouts that live here send three of their number up the steep hill overlooking the village, to the ruined tower that watches over them, lit torches in hand.

The beacon is lit. A warning spread south and east. The Jotun are here. Send aid.

The low lands of Yellow Chase in Segura are hot, dry, stony, and impoverished. The soil is poor and the landscape is marked by pockets of heavy rock which are never far from the surface. The truth is - and this is the Brass Coast where people prefer the truth even if it is hard and unwelcome - that some of the people here are not much better than the land. Even before the invasion, there were stories that some of them traded with the Lasambrian bandits on occasion, to make ends meet; and sometimes perhaps did even worse things. A “Yellow Chase farmer” is a slang term used in parts of Segura for a liar - especially someone lying about where their money has come from.

So when the first reports of orcs in the Yellow Chase come down the Cinnamon Road, the long trod that runs north out of Anduz and up to Kahraman, few people pay it much heed. There have always been a few orcs in the Chase… this is hardly news. Don’t these people realise there’s a war on? People shake their heads, civil servants file reports, and a few dutiful Kohan set off to make sure that it is something and nothing.

It is fortunate indeed that they were vigilant - for it appears that the inhabitants of Yellow Chase are not exaggerating. A force of Jotun warriors has crept over the border and is quietly getting on with the business of invading Segura.

It is not an army - of that much the scouts are certain - but it is vastly more than the local dhomiros are able to deal with. There are somewhere between one and two thousand orcs here - heavily armed and armoured and all marching under the banner of a bird wreathed in flames. At first glance they appear much like any other elite Jotun champions, but on closer inspection their leaders wear sashes and hoods of bright orange hue - not a colour normally associated with the western orcs. At least, not a colour associated with the Jotun orcs. Some of the Yellow Chase farmers have seen orcs wearing that colour before…

It is no coincidence then that they are in Yellow Chase. This area once served as a centre of power for the Lasambrian barbarians, there was a great armed camp here from which raiding parties swept down onto the plains. The camp was abandoned when the bandits were driven off by Dawnish forces during the last days of the liberation of Segura. Now it has been reoccupied - and it appears these new invaders are intent on fortifying the site. A loose palisade of closely packed timbers is being raised around the perimeter of the camp. This is not a real fortification yet - there is no white granite being employed - but it is all too clear that these orcs are intent on securing this position.

This is not the only thing the strange Jotun are about. A pair of shepherds report that there the rock fall that blocked the pass over Old Man’s Ride into Reinos ten years ago has been completely cleared. This was a major landslip, that would have taken hundreds of people working for days on end to make it passable for just a merchant wagon. Now it is a smooth as honeyed silk, and what’s more they claim that the road that leads up to the pass has had every hole filled with loose stone and then pounded flat. With the pass blocked, it took nearly a week to get over the border here - now you can do it in a day.

+++GAME INFORMATION : TWO TALES+++
These two forces - one in Sermersuaq and one in Segura - are not campaign armies. They are elite bands of Jotun warriors, and despite their relatively small numbers they seem quite serious about invading the Empire. While this is not a traditional campaign report, it potentially has significant strategic importance for the Empire, so we have included it here. Further information about what is going on will be made available as a Wind of Fortune.

Surprise! Picture is by Beth Dooner. 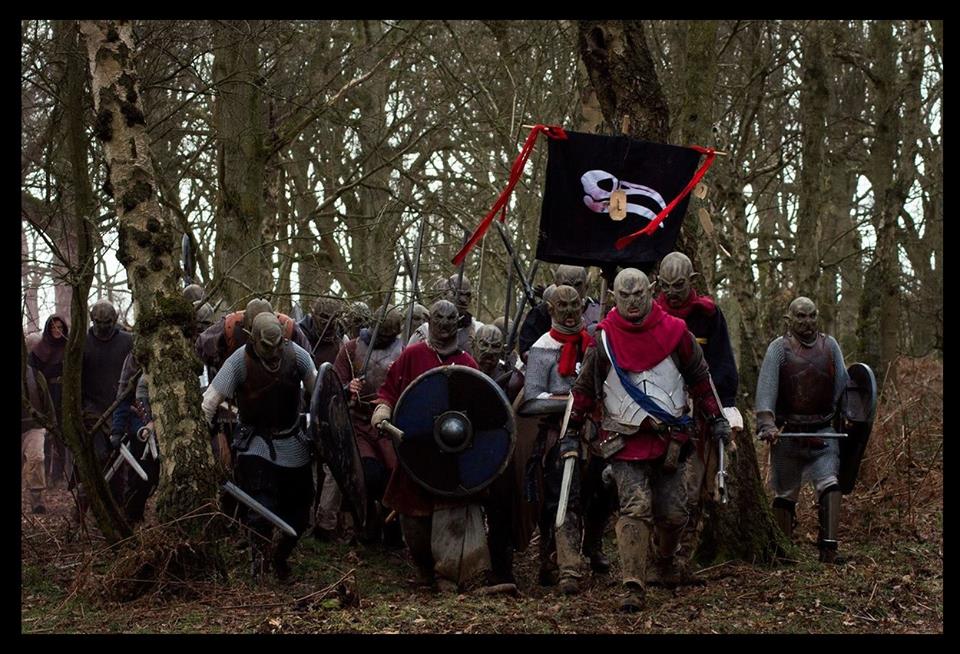