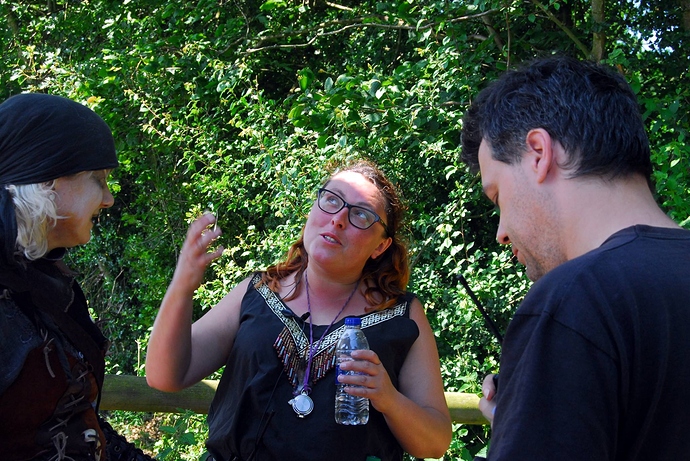 Apologies that there wasn’t an update last Friday, but we now have some news for the coming week. Along with several of our players, we’ve been putting together some plans for things we can do online over the event weekend to make up for the fact that we can’t all get together in a field.

We’re absolutely delighted that the Navarr are going to host a virutal songs and story from 7pm onwards on Saturday 25th. It’s being hosted by some of the incredibly talented people who helped to create an organize the event in the field. If they can capture even a tiny part of that magic it will be awesome. The details are here https://www.facebook.com/events/225104795239523/ for everyone who is interested.

Luca Da Rè is organizing an inaugural Empire wiki pub quiz at 8:30 on Friday the 24th. As I understand it the questions will all be drawn from the wiki, he’s going to get Andy Raff to check the answers first to make sure there’s no room for error. So brush up on your knowledge and head over to https://www.facebook.com/events/1266598823538788/?active_tab=discussion to take part in that.

The wiki update on hearth magic that we’ve been working on is now scheduled for publication on Saturday morning on the 25th. It will include a completely new page explaining what hearth magic is, how it works and why it’s cool, along with a new page for each nation going into the existing hearth magics in more depth and including advice on how to bring them out in play. We’ve recorded a podcast, with myself, Andy, and Wrenna Robson discussing the new changes which will publish at the same time.

We’re also planning something new for Saturday afternoon - a livestreamed AMA session hosted by Mark Wilkin and featuring myself, Andy Raff, and Clare Evans. It will be a Twitch stream where Mark will ask us questions that are posed by the viewers and we’ll answer them as best we can and try not to ramble too much. The loose theme for the session is the new wiki update on hearth magic but you can take the opportunity to ask anything. So if there’s something you’ve always wanted to know about Empire, Profound Decisions, or Andy’s shoe size - join us for that.

Finally we’re going to release the last two winds of war - which will include the latest dramatic developments for the Empire on Sunday morning. We’re working with Anna Reid to try and provide them in audio format at the same time as the written word, so that this time you can enjoy listening to her fantastic narration without any spoilers!

We want to try and get as many things on for that weekend as we can. If you got any plans for cool things to share over the event weekend, then please let everyone know on the Empire group - the more the merrier!

Photo of myself and Clare by Nick Meredith.