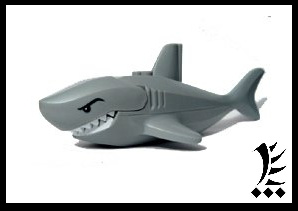 “So we were coming back from the island of Tinian,” said Cinque di Sarvos.

“Is this really the time Cinque?” Asked Hoepel, pulling himself a little further up the badly listing deck. Cinque spat.

“You think there’s going to be time after this, mate?”

“So as I say we were sailing back from the island of Tinian. We’d a hold full of Jarmish spices and a nice chest of the good crystal when the Grendel caught us. Ship went down faster than you could blink. Grendel didn’t bother to pull us out of the water, just left us there.”

A gull landed on the splintered railing near Cinque, peering at him speculatively to see if he was ready to eat. The grizzled sailor threw his empty bottle at it, and it exploded into the sky in a burst of feathers and angry squawking.

“Didn’t see the first shark for about half an hour. Thirteen foot long - you can tell by looking from the back fin to the tail. Came with the dawn, so it did. Cruising by. We pulled ourselves together - some of us from my ship, some of them from the other two. Paddling on planks and doors and the like. Shark got too near, we’d start banging and shouting and splashing and sometimes the shark would go away. Sometimes she wouldn’t go away.”

Hoepel was scanning the horizon for any sign of another mast - even a Grendel mast would be welcome at this time. He’d rather take his chances with the salt mines than the sea. The deck shifted, sank a little lower, wood splintering and tearing against the rocks.

“Sometimes that shark looks right at you,” said Cinque. He was looking at the sea but it was clear he was seeing something else, some awful scene from thirty years before . “Looks right into your eyes. And the thing about a shark is she’s got lifeless eyes. Black eyes. Like a doll’s eyes, like buttons. When she comes at you, she doesn’t even seem to be living… until she bites you, and those black eyes roll over white and then… ah then you hear that terrible high-pitched screaming. The ocean turns red, and despite all your pounding and your hollering and your splashing those sharks come in and… they rip you to pieces.”

Cinque stopped talking, chewing on his moustache. Hoepel poked him to make sure he wasn’t dead. The older man batted his foot away and started talking again,

“You know by the end of that first dawn, we’d lost most of those that had survived going into the water. I don’t know how many sharks there were. They took six of us an hour, give or take, through that day. Just after noon, I bumped into a friend of mine, Hervis Rohansson from Hahnmark. Boson’s mate. I thought he was asleep. I reached over to wake him up. He bobbed up, down in the water. Upended. Well, he’d been bitten in half below the waist.”

Hoepel was white as a sheet, mesmerised by the story, the slow cadence of Cinques words - no slurring despite the heat of the sun and the amount of spirits he’d drunk since the boat hit the rocks.

“I hear the Conclave says there’s no such thing as…” began the younger man, beginning a tired joke that nobody could really explain. His words faltered and fell to silence.

A triangular black fin was arrowing through the water toward the stricken Narwhal. Cinque must have seen it but he just kept spinning his tale.

But what he’d sworn, Hoepel didn’t hear. The fin was gathering speed, sinking beneath the water as it came. Hoepel scrabbled further up the deck, wrapping his arms around one of the wooden posts, desperately scanning the rolling waves and the broken rocks for somewhere to go, some avenue of escape. The fin disappeared beneath the water.

A moment later. a massive grey head reared out of the water, all churning teeth and fist-sized eyes and absolute primal terror, and Hoepel found himself dispassionately thinking he’s right- they are like buttons. It snapped towards the two stranded mariners, well out of it’s reach. It sank back below the water.

“It can’t reach us as long as…” began Hoepel. But then it was back and this time, this time to the young mariners absolute pants-wetting terror, it pulled itself up onto the deck with two massively muscled forearms.

“Sharks don’t… don’t… don’t have…” whimpered Hoepel. The beast ignored him. Dragged itself further out of the water it’s talons tearing great gouges in the wood of the deck, its weight causing the ship to shift and sink and grind against the rocks. It angled its head so it could look at Cinque and in a voice like nails being dragged down a blackboard - if the nails were made of rusted iron and the blackboard as the size of a mainsail - it spoke.

“Man! Do you know the Archmage of Spring? ANSWER!”

Cinque looked up at it dazed, too frightened to move or speak. The shark-thing lowered its head and snarled again.

Immediately the shark-thing lunged forward, snapping teeth and bit Cinque in half. Blood geysered across the deck. It didnt even pause to eat the bottom half of him which slid down the deck trailing guts behind it.

The shark thing pulled itself further up onto the now blood-soaked deck and shrieked at Hoepel.

The shark thing paused, and then shrieked again.

+++GAME INFORMATION+++
Five eternals have responded to Archmage plenipotentiaries. Three have agreed to parley, one has agreed to a parley but is bringing guests who will be there on their own recognisance, and one has flat-out refused a parley but still intends to send a “champion.”

You can find out which is which here → https://www.profounddecisions.co.uk/empire-wiki/What_did_the_deep_say%3F

If you are interested in attending, you might also wish to read over the explanation of parley here → https://www.profounddecisions.co.uk/empire-wiki/Archmage…

Just to avoid accidental breaches of Parley you understand?