++WHERE ALL ROADS MEET++ Winter 381YE Winds of War

++WHERE ALL ROADS MEET++
Immediately after the Autumn Equinox, the bulk of the Druj forces in Semmerhold push north into Estmure. They assault Estcastle, taking vicious pleasure in slaughtering as many Imperial Orcs as they can find. They raid Lacre, damaging the cathedral. They do not have things all their own way; a citadel of ice and basalt rises in the hills of Estmure, garrisoned by white-skinned knights in armour of living frost. The knights of Lacre and the orcs of Estcastle, along with a few scattered survivors from the fallen Gate, find sanctuary within the frigid halls. They rally against the Druj, who find their advance blunted by its adamantine walls.

At the forefront of the force pushing toward the Semmerlak, and toward Holberg, are the Black Wind. For a short time free orcs of the Barrens, they abandoned their fellows to return to the Druj, heads bowed and glad of the yoke. They are very much changed from the time the soldiers of Dawn met them on the fields of the north-western Barrens. Aping their masters, they are cruel and barbarous beyond measure. They murder and torture without mercy, and those who fall into their hands die screaming, their broken bodies left bound to trees - as the orcs of the Barrens once bound the bodies of the Druj in the brief period they were free. Even the brave yeomen and knights of Dawn balk at facing the bitter vengeance of the Black Wind; where their black banners go the militias of Semmerholm flee.

A second force of Druj push westward into Ulvenholm. Smaller and more focused, these orcs advance under banners showing twisted yellow-eyed black lizards. There are a significant number of Vikari marching alongside them. They make a straight line for the Pits of Brychel, barely pausing to pillage the estates they pass. There are a few reports from the Navarr of Boar’s Dell that this army is sending scouts south across the border, into Brocéliande, perhaps looking for something. Uncharacteristically, they retreat as soon as they see the thorns that defend the scattered steadings of the northern forest, avoiding any engagement. They are up to something … but there are no clues as to what.

Two weeks after the Autumn Equinox, the armies of Dawn arrive.

All four armies - the Gryphons Pride the Hounds of Glory, the Eastern Sky, and the Summer Sun - march into Semmerholm. The first time they have been in one place, fighting the enemies of Dawn. The banners of the nobles of Dawn flutter above glorious knights caparisoned in shining plate; above war witches ready with shield and rod, and staff; above yeofolk archers and spear fighters in the colours of their house.

Alongside the armies march nine thousand elfin knights of the realm of Summer. Three cohorts of the supernatural soldiers of Eleonaris fight for Dawn. Three majestic champions of the Queen of the Fields of Glory march alongside the captains of the Gryphons Pride, Hounds of Glory, and Eastern Sky.

Dawn and their fey allies do not fight alone - the Fist of the Mountains, the heroic champions of Wintermark, fight with them. Allies come from further afield as well - four hundred Iron Confederacy soldiers fight beneath the black and silver banner of House de Coeurdefer alongside the Hounds of Glory. Grim faced nobles of the Duchy of Guiscard lead chain-shirted levies against the Druj. Far from home, they fight with a dour brutality, eschewing the blandishments of the enchanted knights that fight alongside the Dawnish. They fight with courage, but it is perhaps doubtful that these magic-hating foreigners will take a good report of the campaign back to Kalino with them.

The Gryphon’s Pride push to conquer, engaging the Druj in Axmure and smashing their makeshift defences. The Hounds of Glory charge, and the Eastern Sky charge with them. Ten thousand nobles and yeomen of Dawn, six thousand warriors of Eleonaris. They crash against the Druj forces in Estmure in a furious wave, a hammer of gold, and steel, and azure. The orcs fall back almost immediately, and fall back again … and then they attack. With poison blades, they launch ambush after ambush. War-witches, and yeofolk, and elfin knights alike fall beneath a withering hail of arrow-fire. Proud armoured nobles, ambushed by assassins, learn that their armour offers little protection against the poisonous thorns of the Druj. Bloody engagement after bloody engagement, the cost counted in the blood of Dawn.

One of the Druj armies attempts to flank the main force of the Dawnish, the orcs relying on their maneuverability and stealth to attempt to strike the Imperial forces from the rear. This strategy is barely effective against the aggressive Dawnish armies - but the Fist of the Mountains are another matter. Behind the main advance, the Winterfolk fight a bitter battle to keep the Druj contained, slaughtering their scouts and far-ranging raiders and protecting the scattered manors and estates of western Semmerholm. Their defensive positions make them easy prey for the fast moving army that fights beneath the banner of the hunting scorpion; the Fist of the Mountains are hammered from the flanks and from the rear by elite chikad and hupul, and when they try to respond their assailants melt back into the trees.

Battles between the Empire and the Druj rage back and forth across eastern Semmerholm for two months. The Imperial armies try to force the Druj to fight them in the open; the Druj try to force the Empire to engage them in the forests. Blood flows like bitter wine on both sides. In the end though, after eight weeks of relentless campaigning, the Druj are driven back. The Gryphons Pride leads the push south, mile by mile. The Druj armies retreat before them, falling back to the crude fortifications they have built around the ruined manors of southern Semmerholm.

The Druj are turned back, but they are not driven from Semmerholm. Yet for now their threat of conquest has been met, and soundly answered. The cost was high; the dead lie like fallen leaves beneath the trees of Axmure. Four-and-a-half thousand Imperial citizens will fight no more. Most are dead; some are so broken in spirit or body that they cannot be easily saved; others are lost, their fate unknown. Orc corpses lie among the fallen in equal numbers - all told at least eight thousand people have spilled their blood in the fight to drive the Druj from Semmerholm.

+++GAME INFORMATION : SEMMERHOLM+++
Imperial forces stop the Druj advance and push them back into southern Axmure. They still control the region but their hold is extremely tenuous. There are some reports of orc warriors in Unlvenholme as well, but this seems to be a guerilla force rather than a campaign army.

Everyone who fought in the Semmerholm campaign is aware of the monstrous presence of the Black Wind army - an army undertaking the merciless onslaught order. The Imperial forces luckily did not suffer enough casualties to bring them to the threshold where this tactic would have broken their armies, but many soldiers will suffer nightmares of the atrocities these savage barbarians inflicted on the people of Axmure and Estmure.

The presence of nine-thousand Knights of Glory and the Frozen Citadel of Cathan Canea, play a significant part in this victory, as did the bold strategy of the Dawnish generals. Without both factors, the Empire may well not have been victorious against the massed forces of the Druj. By contrast, while the defensive strategy of the Fist of the Mountain was effective at killing the Druj, and saving Imperial lives, it did nothing to push the orc armies back.
+++PARTICIPATION+++
The presence of three cohorts of knights of glory, summoned by the magicians of Dawn, has not only had a significant effect on the campaign outcome. Any character whose military unit supported one of the three armies that fought alongside the heralds (Gryphon’s Pride, Hounds of Glory, and Eastern Sky) may choose to begin the next event experiencing a roleplaying effect. You are filled with confidence; nothing is beyond you if you put your mind to it. Now is the time to act, to pursue goals you have been neglecting. Anyone who questions your prowess must be taught a quick lesson about the foolishness of doubting you.

Furthermore, if you are a changeling whose military unit supported one of the three armies, the roleplaying effect is much more pronounced. In addition, and if you have the hero skill you have an additional hero point for the duration of the event. Such characters may also use their experience of fighting alongside the knights of glory to permanently increase the strength of their lineage.

Another not-short one. And another picture from Beth. And now onto the major conjunctions list probably. 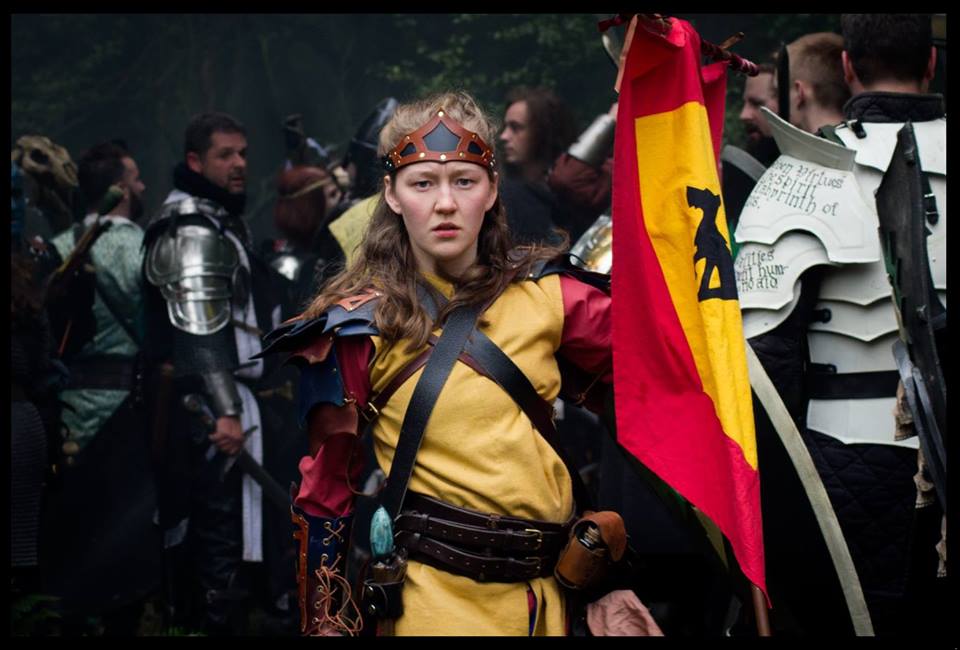