+++THE SCARS FROM TOMORROW+++
“So you been following this criminal for all this time? That’s crazy!”

The Orc thief-taker scratched his nose and tried not to agree with his old friend. “She’s an oath-breaker, a sorcerer, a murderer, and worse. You now what I’m like. It drives me nuts if one of them gets away. I just have to keep at it, otherwise the voices won’t leave me alone.”

“So she was from Brocéliande originally? From the Bracken Steading?”

“You’re not listening - I said she was from near there. She was one of a whole big group of them that murdered a bunch of Navarr. They got declared sorcerer and the leaders were executed, but the rest of them fled. That’s how I got involved, the voices just kept telling to keep on after this one.”

“Must mean something if the ancestors are telling you to pursue her?”

“Nah - it doesn’t usually. It’s just how it is. I get some criminals face stuck in my mind and then the voices won’t hush until I bring them in. Anyway - the point is I tracked her the length and breadth of the Empire. I’d lose the trail time and again - but each time I’d get a lucky break and pick it up. She was up north for a good long time, moving around, up to something. Spoke to loads of people but never managed to catch up with her. Then the trail went cold - but I couldn’t give it up. The voices just kept on at me.”

“That’s tough.” Hent, the younger orc sympathised with his old friend. The ancestors were rarely that close to him, but he knew what it could be like when they were trying to tell you something you didn’t want to hear.

“Yeah - anyway - I put up with the that for the best part of two years - then out of the blue a month ago I bumped into Reller in Tassato. You remember Reller yeah? Well anyway she mentioned she’d seen her in Tevia heading east. Part of a big group apparently. So I hightailed it down there as quick as possible, but they were all well gone long before I got there. But that’s what I love about the trods see - they make tailing people a breeze. You just have to know which way they’re going and hope you get to them before they turn off.” Palt stopped talking long enough to take a deep drink.

“And did you?.. Get to her before the turn off?” Palt’s friend was hooked now - dead keen to know how the story ended.

“Nah - she was too fast for me - so I had to take a guess. I picked the route to Anvil though, figured it’s the most important trod, so it was the best guess. And luck was with me, I was making a helluva time too, even given it was a trod, I felt like I could just walk for a month. Never moved so fast on a trod before in my whole life! I felt sure I was gonna catch up with her, they were a big group and there were signs of their passing now - but damn me if she didn’t stay a day or two ahead the whole time. Drove me nuts.”

“Nah - they skirted right round it. Probably the whole lot of them were criminals I’ll bet. Where you find one, you usually find a pack. They won’t have wanted any Anvil troubles. Anyway, they carried on fast as they could, like an entire pack of hounds were after them, rather than just one old thief-taker! I caught sight of them then, right on the edge of the forest. Big bunch of them there were, maybe twenty or thirty in all. Navarr by their clothes I reckon. Did I say she was a Navarr? I said that bit didn’t I?”

“Yeah you said that already - go on - what happened next?”

“Lost em. Still can’t believe it. I weren’t shadowing them then, it was just a flat out sprint. Wasn’t worrying about how many there were, the voices had me ready to take them all on just to lay hands on her. Couldn’t see them in the forest of course - but you got the trods to guide you haven’t you? Dangerous mind - that part of the Empire is - Brockie’s one of the really old ones - still active. You have to be damn careful. She weren’t taking care though. I followed their tracks all the way to the edge of the heart. And chain me up if they didn’t just march right in there without a care in the world. The whole lot of them - just carried on running straight in, like they were trying to jump over the Abyss. Now the vallorn’s got 'em and I’ll never get my bounty - or any peace!”

“You still got the voices?” Hent asked. “What are they saying?” he asked when his old friend nodded, more out sympathy than curiosity.

Palt closed his eyes in mock meditation. He slowly opened them, with a look of astonishment on his face. “They’re saying… they’re saying… it’s your round Hent!”

++GAME INFORMATION+++
Four sections for this Wind of Fortune about vallorns and trods.

You can learn all about things green and mobile here -> https://www.profounddecisions.co.uk/…/The_scars_from_tomorr… 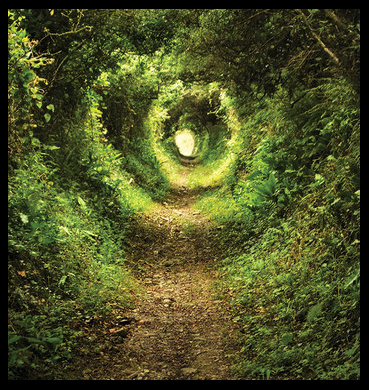