++Winds of Fortune Winter 380YE++ Those who Worship 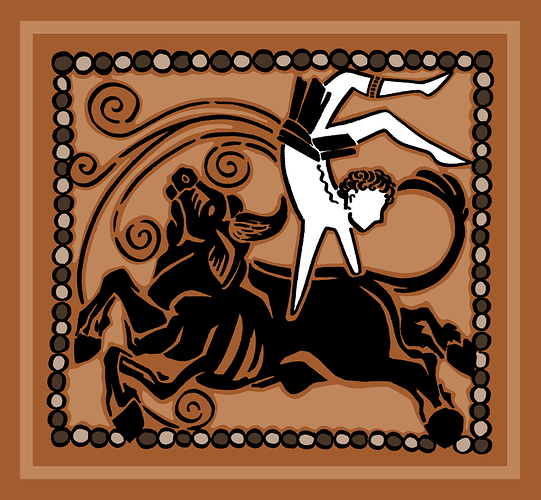 “The olives are very - mmm - tart but its the sauce that makes them. What’s your secret?”

The Freeborn mistress of the Paradour smiled and arched an eyebrow. “Trade secrets? Really?”

The Asavean architect smiled back at her, tipping his cup of syrah in a mocking, friendly toast.

“But really its not a great secret. Imperial roseweald is the secret. Properly prepared of course. And chili peppers. Never scrimp on the chili peppers, as my mother used to tell me.”

The architect nodded scooping up a fingerful of the sauce with obvious enthusiasm. He followed it with another olive, spitting the stone into the shallow bowl at his elbow with practiced skill. Then he pushed his plate away and leant back.

“Truly, a repast fit for the Gods.” He said expansively.

A little lull settled around him, a well of silence, as the diners to his left and right fell silent. After a moment, conversation resumed. The Asavean looked a little flustered.

The paradour mistress waved him away. “I shall take it as the compliment you obviously intended,” she said. She caught the eye of her son, giving him a quick nod. He came over to clear the plates away, and then returned with a jug of freshly squeezed orange juice and a plate of savoury biscuits.

“I keep forgetting, I’m sorry. I’m still not used to Imperial ways even after two seasons. I blame your weather.”

The paradour mistress poured herself a glass of fruit juice. “How so?”

“Its warm, it’s dry. We’re on the coast. If I close my eyes and relax I can imagine I am sitting in an eating house on the docks at Santuário, I forget I’m thousands of miles away in a strange land surrounded by strangers with strange customs. And so I honour the Gods, and then people look at me strangely. It is the same at work.”

“Do you mention the Gods a lot at work?” The paradour mistress sipped her fruit juice.

“How can I not? Baddu guides my hand when I’m drawing. He’s in the spirit level and the plumb bob. He helps me keep my head when people are being idiots. Without his teachings, without the measure and the line, it is so much more complicated to explain how long your carpenter is meant to be cutting the planks. You know I’ve had to employ a young man to translate all my instructions into something that won’t cause your people to start waving their arms and hooting about idolatry? Another expense.”

“I’m sorry, I’m sorry. I should not rant. I seem to spend so much of my time either apologising or ranting these days. I like your country, but it is tiring sometimes. Your people can be so humourless.”

He helped himself to a glass of cool fruit juice. Then he leant forward conspiratorially.

“Now if we were at home, after such a fine meal and such pleasant company, you know what I would do? I would thank you, and pay my bill, but on the way out I would toss a handful of coins into the bowl before the little shrine of Esoran el pequeño cocinero. There would be one by the door. I’d thank the God for my fine meal, but in the evening when the last customer has gone, the money from the shrine would be collected and split between the servers and the cooks. I thank Esoran for my meal with a prayer and and offering, and Esoran thanks you by sharing the money - and keeping the prayer for themselves. The more I like the meal the more money, and the more effusive my prayer. It is elegant, and polite. Here though? Here I have to constantly ask for the price of things or run the risk of offending someone.”

“And this is a custom shared by all Asaveans? Or just architects?”

“Everyone I know does it, architects, labourers, builders, carpenters. Sailors.”

She began to smile.

The Temple of Balo and the Black Bull! A saga of idolatry, blasphemy, international intrigue, and planning permission!

It’s nearly done - and now the big question of the temple of the Way in Nemoria needs to be addressed. Synod dilemma … or maybe not. The Plenum (the Asavean senate) apparently doesn’t care who builds the temple and an opportunistic individual might be able to take advantage of this to gently nudge the temple in a direction other than missionary work.

Now that the structure itself is (finally) finished, the work of filling it with art and altars and the like is that the prestigious priest of Baddu the Builder named Almodin Oktístis is looking for something interesting to do with his time before he returns home. One of the things he’s suggested is that, if the Senate is interested, he can increase the number of the commissions they can perform each season - provided they are prepared to give him and his team (congregation?) a reasonable stipend.

You can learn about all this here → https://www.profounddecisions.co.uk/empire-wiki/Those_who_worship

The picture is a lovely piece Steph Morris just threw together in an afternoon, inspired by Minoan bull dancers. I think it shows a young novice of the Black Bull proving their courage and athleticism before being accepted for training as a priest of the God of Soldiers and Bodyguards.