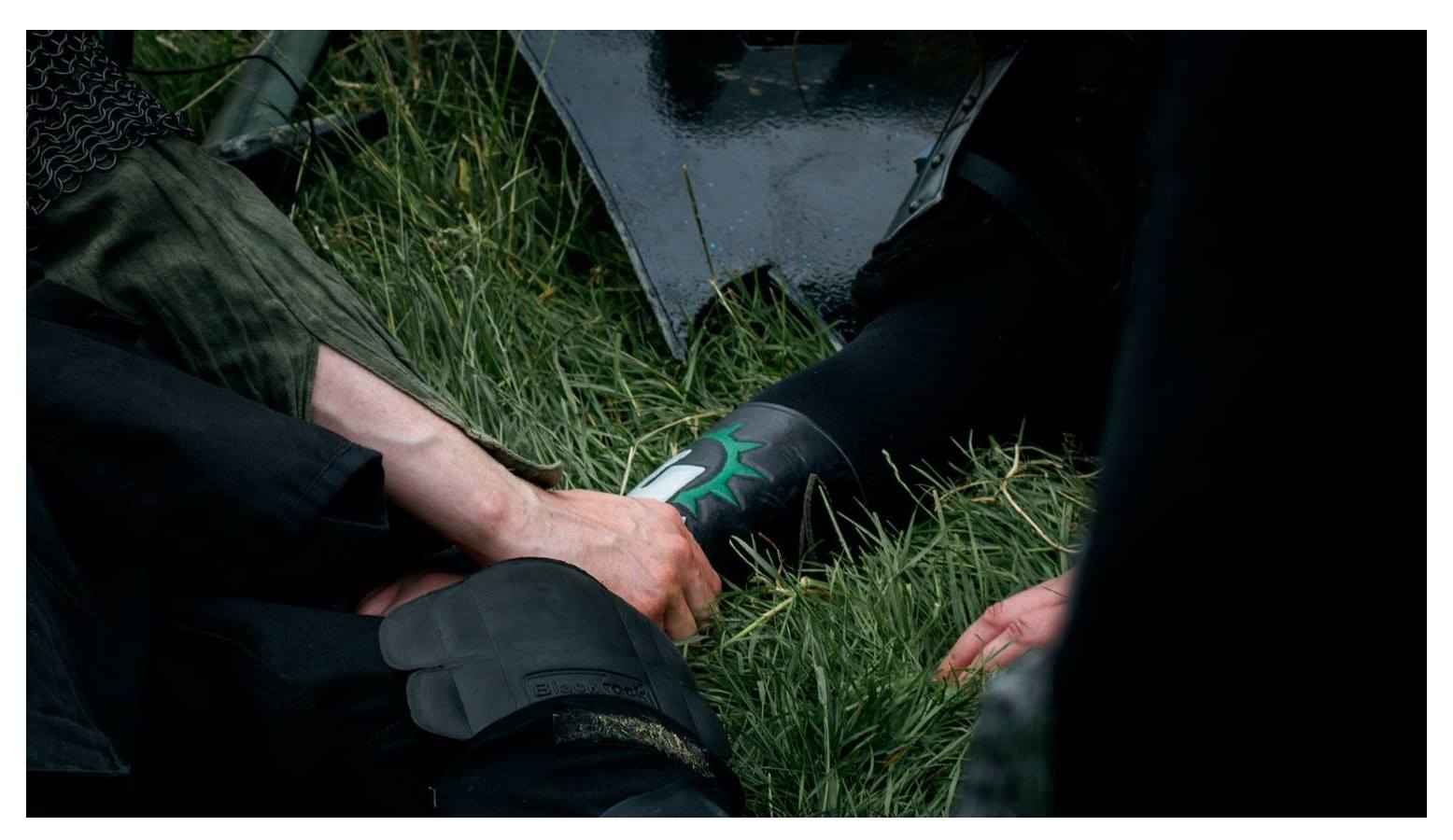 After the Battle of Solen’s Doubt, the Citadel Guard, the Red Wind Corsairs, and the Winter Sun withdraw westwards leaving the Varushkan Iron Helms and Northern Eagle, the Summer Storm, and the two League armies to finish the task of liberating Spiral. Six thousand soldiers under the banners of independent captains fight alongside the Wolves of War; a handful of other captains fight with the Summer Storm. For the most part, the Imperial armies engage in a slow and steady progression into the remaining regions of the south-east, engaging the orcs carefully and making great use of physicks, magical healers, and the priests whose ceremonial skills help to reduce the impact of the horror that lurks at the heart of Screed.

The Iron Helms and the handful of captains who march with their banner eschew such careful tactics and instead engage in a campaign of wholesale terror and slaughter against every orc they can find. Without the supernatural terror unleashed by their magicians during the previous season, they are forced to rely on more mundane tools of torture and execution - but they prove equally adept at wielding the sharpened stake, the hound, the chain, and the rope as they were the abyssal terror and howling gyre during the advance on Solen’s Doubt. There are few enough orcs left in the territory - the Grendel appear to have made a full retreat - but some still fall into the hands of the Varushkan soldiers of the Iron Helms and suffer for it.

The majority of the Imperial forces first push through the wooded rolling hills of Apstrus, capturing Solen’s Doubt, and the fallen remains of the central heliopticon tower there. At the same time the Summer Storm drive into the hills of Ateri, securing the ruins of Fort Mezudan and the eastern end of the Onyx Path. Both forces then turn their attention to Apulus, and to the Grendel fort at Apulian.

The fighting on the southern coast is brief, and exceptionally bloody. There is no chance of escape - a supernatural storm roars across the southern coast, and those ships prepared to brace its unrelenting fury have done so weeks before. The garrison does its best to hold back the Imperial tide but they cannot hope to stand. Even tired from the conquest of Apstrus and Ateri, the Empire easily crushes the defenders of Apulian. The soldiers there have suffered their own months of terror since the nightmare at the heart of Spiral was awoken. All told, the siege lasts less than a week - the gates fail and the town is liberated.

The Iron Helms hang every surviving Grendel soldier; many choose to throw themselves into the waters of the Bay of Catazaar rather than face the fate that awaits them if they fall into the hands of the Varushkans.

A number of slaves are liberated, but there are few Urizeni here however. Those who were enslaved in Apulian are exclusively mundane citizens - farmers and miners without a spark of magical talent. They talk in halting sentences about the magicians - the magi, the stargazers, the seers, and especially the illuminates - who have passed through Apulian in chains both real and metaphorical. Carefully examined by Grendel Wind Lords, the magicians who fell into the hands of the Broken Shore orcs were quickly taken out of Spiral, sent south to the slave markets of Dubhtraig, of Fort Fuil, of Gainmeachdubh, and of Vorlach.

There are also a handful of slaves who were Imperial soldiers, Winterfolk and Varushkans especially. Taken prisoner in battle and pressed into service, they . As with the magicians of Urizen, however, the majority of these men and women have been sent elsewhere. There is a great demand for strong, disciplined warriors both to work in the salt and the mithril mines, and to spill out their blood for the amusement of the Grendel in the arena.

Finally, there are a small number of people among the freed population who speak little Imperial. Once translators can be brought in, they are discovered to be slaves from the Asavean Archipelago. They are not slaves of the Grendel, for the most part. Rather they appear to be the slaves of an Asavean collaborating with the Grendel - a representative of the Tarquinius family of Nemoria. That powerful Plenum family, it seems, has been trading white granite and slaves to the Grendel - importing the valuable building material to a number of places but most especially to Apulian. Asavean quarries provided the stone used to build the fortifcation here - a fortification that was in the process of being enlarged when the Empire tore it apart. Without exception, these freed slaves ask for sanctuary in the Empire.

There is a single Asavean ship left in the harbour, and when Imperial troops move to board it a handful of soldiers attempt to stop them. An argument ensues, blades are drawn. Blood is spilled. Their master - Leri Tarquinius - is dragged kicking and screaming from the captain’s cabin. The Tarquinius does not seem to appreciate the gravity of his situation - he is arrogant and condescending. He demands to be allowed to leave once the storm has died down, to return to his peoples’ embassy in Dubhtraig. He wants to take his slaves, of course, and also his shipment of white granite. A quick inspection discovers that the cargo hold of his vessel is weighted down with fifteen wains of white granite, which he claims quite vociferously are the property of the Tarquinius family for which he has not been paid. He is taken into custody for his own safety, before anything unfortunate can happen to him.

And so Apulian falls… but there the advance falters. The constant pressure of the abominable atmosphere, and the desperate tenaciousness of the defenders of Apulus, has meant that the Empire has failed to take the entire territory. Two-fifths of Apulus is not in Imperial hands. It does not entirely appear to be in Grendel hands either, however. Rather, it seems that a large number of ex-soldiers, orcs and humans driven to madness along with what seem to be the tattered remnants of the howling maniacs that once clustered in Screed, have gathered in the south-east. They slaughter and in some cases devour those few Grendel who attempted to flee toward Mareave in the south. They are disorganised, confused, nothing like an army… but there are a lot of them and they effectively control the southern part of the region.

Throughout all this, it must not be forgotten that at the heart of Spiral, the gyre of despair at the heart of Spiral continues to cast its ebony shadow across events. It shows no signs of becoming quiescent - quite the contrary in fact. It seeps into the hearts and minds of humans and orcs alike - spreading despair, breeding violence and unleashing the darkest nature of those who fight under its influence.

All told, a little over three hundred Imperial troops are lost fighting the Grendel, primarily during the assault on Apulian. A further one and a quarter thousand are lost to the malign influence, to the nightmares. Some die, or are killed, or kill themselves but many more survive long enough to desert, even though they are driven to howling madness and bloodthirsty violence. The orcs of the Summer Storm are a little more able to endure its influence than their human companions, able to resist any urging to turn on their fellows… but this simply means that when they do lose control they do it in groups.

It seems impossible to judge, but far from abating the storm of madness that swirls around the plateau has gained strength. There is nothing like the horror that swept over Solen’s Doubt, but rather a slow intensification of malice and dread that hangs like a thick fog over everything. With each execution, with each crucifixion, with each mass-hanging or impalement by the Iron Helms, the shadow of the Black Plateau deepens, seeping into everything… including the spirits of those who fight in the territory.

The Empire controls Ateri and Apstrus, but is only three-fifths of the way toward conquering Apulus. This success means that the Citadel Guard are no longer in danger of disbanding.

The Black Plateau continues to influence the territory, and that influence has become even more powerful as the season has worn on. Next season, every Imperial or Grendel campaign army fighting in the territory will suffer 30% additional casualties, and will lose 10% of its maximum strength over the course of the season even if it is not engaged.

Finally, Imperial forces have captured an Asavean dignitary and 15 wains of white granite that apparently belong to the powerful Tarquinius family. Leri Tarquinius is in custody for his own safety, but is quite adamant that while the white granite was to be sold to the Grendel, they have not actually paid for it and so it remains the property of his family. He is demanding to be released and allowed to return to Nemoria with all fifteen wains.

With the liberation of Apstrus, we have updated the strategic information on the Spiral page. The mountains here contain no passes through to the Grendel territory of Mareave that are suitable for use by an Imperial army. Without an opportunity it is only possible to enter Mareave through Apulus. It is possible to commission a spy network in Mareave however - the high mountain passes can be traversed by small groups of adept soldiers even though they are closed to the armies themselves.

As with last season, anyone who wishes to roleplay there were present during the recent campaign is free to create their own horror stories of things they have encountered, based around themes of creeping fear, haunting phantasms, eerie dreams, gnawing suspicion, and outbursts of uncontrolled anger. As the campaign escalates, these experiences become more visceral, and more horrific - although any player character is assumed to have sufficient mental fortitude to have resisted the worst excesses caused by the malignant force of the Black Plateau.

Every player whose military unit supported an army in Spiral this season, and the generals of those armies, will receive a curse card in their packs at the event representing the oppression of the Black Plateau.

There we go - Spiral. Just when you think it can’t get any worse, it gets just that little bit worse.

This picture from Beth’s is probably one of my all time Empire favourites, full of pathos and “the feels” as I believe the Millenials have it.