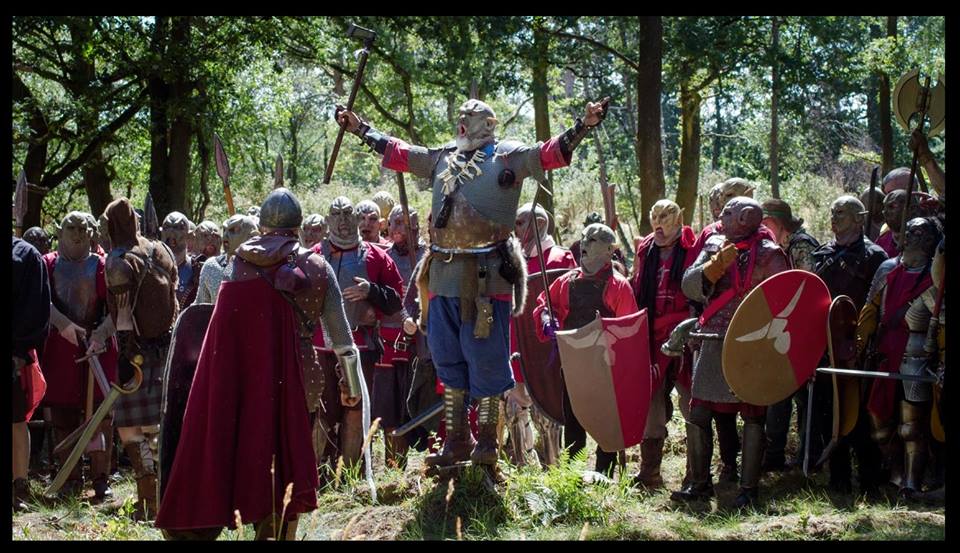 As Summer lengthens into Autumn, Imperial forces withdraw south from Sermersuaq into Kallavesa, the Mournwold, and even distant Astolat. That is not to say there is no fighting on the plains of the north; Winterfolk of all three traditions do their best to hold back the Jotun advance - but without Imperial forces they have little hope of victory. Refugees fleeing across the border into Hahnmark bring bold stories of the heroism of those still fighting - but they do little to mitigate the grim reality of absolute conquest. Tens of thousands of orcs, sweep through East Floes, Suaq Wastes, and Suaq Fount.

The halls of Sermersuaq are swept before the Jotun like leaves before an Autumn storm. Fjellreven, Saker, Sussivari, Nanuk - none can hold against the orcs for long. One by one, they fall before the western barbarians, just as Atalaq before them fell.

Within six weeks of the Summer Solstice, all of Sermersuaq is in the hands of orcs. Everything save the Silver Peaks, where the Thule continue to hold dominion, is under the control of the Jotun. Word-of-mouth suggests that while the loss of land has been absolute, the loss of life has been comparatively light. True to an agreement forged in the recent peace treaty, the magicians of the Thule have laid down a veil of Spring magic across the territory, filling the lakes and rivers with healing power. For their part, the Jotun have come as conquerors and not butchers; their focus is on claiming the territory not on slaughtering its people. All Winterfolk who come under the aegis of the Jotun are given the Choice: some choose to fight - and die - but many submit to live as thralls. Their lives will be hard, but they know the Jotun will not harm them as long as they honour their choice.

Along with news of conquest comes a stranger tale. According to those fleeing before the orcs, on the first night of the new moon after the Summer Solstice, the dead rise in Sermersuaq. There have been recent problems with the unquiet dead already - the still unresolved matter of the Finfolk and the drowned dead - but this is something different. From beneath fresh barrow mounds, dead orcs and humans alike tear themselves from the soil and lurch in search of warm flesh and hot blood.

At first the Winterfolk wonder if these are dead heroes returned to aid them, but this optimistic fantasy is soon dispelled. The husks are ravenous, without thought, as eager to feast on the Suaq as on the Jotun. They are a terror in the night, drawn to the gathering places of the living - Jotun camps and Wintermark halls alike face their unliving fury. Many of the fleeing Winterfolk weep openly - the men and women who died as heroes in the fall of Atalaq are among the first to rise, the first to asssail the very people they gave their lives to protect. By all reports the Jotun in Sermersuaq are filled with fury, enraged by the dishonour shown to those who have died, whether human or orc. They fight as keenly to defend their new Winterfolk thralls against the blood-thirsty horrors as they fight to protect their own people.

It is clear who both groups believe is to blame - and the Empire’s decision to withdraw its armies just ahead of the dead rising is seen by many to provide conclusive evidence of Imperial culpability. Luckily, the magic of the Thule minimizes the slaughter - but many lives are still lost on all sides to the ravening dead.

There is some minor good news. As the Autumn Equinox approaches, word comes that the miners at the Pride of Ikka’s Tears have escaped the Jotun advance. Continuing to work until the final hour before being forced to withdraw, a huddled caravan crosses the Suaq Fount eastward, a bare handful of miles ahead of the or advance. The mine itself has fallen into Jotun hands - there was no way to prevent it - but this season’s bounty of mithril has not. Reports filtering south are confused, but it seems that the miners are now guests of the Thule in the Silver Peaks, and they have received significant aid from heralds of the eternal Ephisis in reaching this (slightly dubious) safety. By all accounts, thanks in part to negotiation by the representatives of the City of Gold and Lead, the Thule have agreed to allow the caravan to pass through the peaks to Crow’s Ridge and thence to Torfast, without exacting a toll or a tithe for their trouble. The Ambassador to Otkodov may know more.

Sermersuaq is clenched firmly in the fist of the Jotun, but it is clear that they are by no means finished. Three weeks before the Autumn Equinox, bands of raiders begin to press into Pakaanan’s Pass, Northspires, Bruckland, and Skymark. Unliving horrors notwithstanding, the western orcs appear committed to continuing their conquest of the northern Empire.

The entire territory of Sermersuaq is now in the hands of the Jotun. As such, any personal resource owned by a player in Sermersuaq now suffers the conquered territory penalty going forward.

Many of the inhabitants of Sermersuaq have chosen to flee south rather than surrender to the orcs.

The Pride of Ikka’s Tears has fallen to the Jotun, but thanks to a combination of plucky miners and the aid of an eternal, enough mithril has been transported east that a final shipment has been saved in it’s entirety.

You can read the wind of war on the wiki here - where there is an additional option for citizens of Sermersuaq, and more information about the Pride of Ikka’s Tears.

The picture is another Beth Dooner and i think that might be members of our skirmish team paying attention to some goon on a stump.