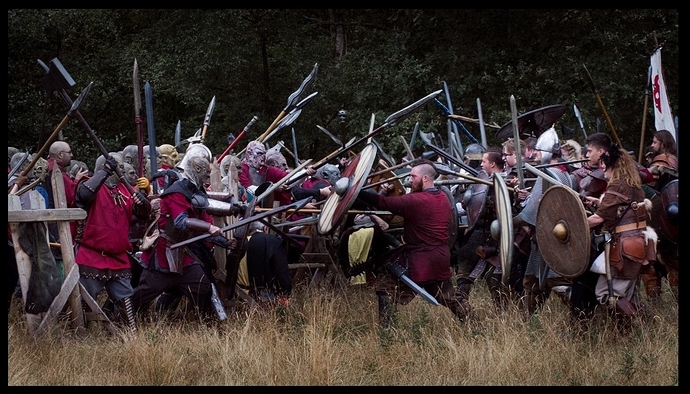 Fresh water is precious in Kahraman. The hills are dry, and the fast-flowing streams that cascade down the jagged rocks from the north are few and far between and jealously guarded by one dhomiro or another. This season, their bounty is doubly precious. Healing power surges in every drop of water, restoring any who drink it or bathe in it. Orc and human alike partake of its supernatural medicinal qualities, and in the months following the Summer Solstice the Spring magic laid over Kahraman by the Voice of the Quiet Forest saves the lives of more than a thousand Imperial soldiers.

Nearly thirty thousand Jotun push west from Serra Damata into Serra Briante and Gambit. They are matched by roughly the same force of Imperial troops pushing east. Two waves of soldiers smash together in the foothills, and on the plains, neither prepared to give an inch to the other.

The Drakes fresh from Madruga join the Strong Reeds, tired and dusty after the long march east from Astolat. The Quiet Step come down past Fort Braydon from Upwold, bolstered by the garrison that has spent the last season slowing the Jotun advance. Between them the Drakes and the Quiet Step are also accompanied by fifteen thousand troops under the banners of heroic Imperial captains. The lion’s share fight with the Marchers, but enough captains rally to the Navarr army to nearly double their numbers. Both Marcher armies are woven with potent enchantments that grant them supernatural clarity of thought, easily allowing them to divine weak points in the enemy advance and take advantage of them.

A glacial citadel - an edifice of ice and black stone- is raised over Serra Briante by the power of Dawnish witches. It serves as a base of operations for the Imperial push eastward, and a potent protection for the town and the mine that bear the same name. Perhaps ironically, it seems to be the same citadel raised by the Jotun in the same place two years ago, complete with a garrison of massive orc-like warriors in fur and leather, marked with spiral tattoos. Now these heralds of Cathan Canae hurl their deadly barbed spears down from the walls onto the orcs they once supported.

The fighting is fierce around the town of Briante, with the main force of the Jotun clearly seeking to capture the great mine once again. They have taken this route before, and know the hills well. Indeed, it seems that there are orcs fighting under the firebird banner who know the hills at least as well as the Freeborn do - former bandits who once lived in the heights between Kahraman and Liathaven recruited by the Jotun during their last foray into the Cinnabar Hills. This time, however, the Jotun are clearly interested in more than just the mithril mine. They push onto the dry plains of Gambit as well, capturing the town of Rojota that marks the southernmost reach of the northern hills. Forewarned by the diviners of the town - or more likely by common sense - many of the citizens have already fled south along the road through Madruga to seek refuge in Cerevado. The predatory gambling houses and the paradors welcome them with open arms - as long as their coin holds out of course.

For the first two months it seems certain that the campaign will end in stalemate. Both forces push against one another, a tide that ebbs and flows. At first the Jotun have the upper hand, but when the Imperial forces arrive they drive them back from the land they have conquered. Then the Jotun rally and push back, driving to the walls of Briante itself. The Jotun are clearly ready to deal with a fortification; no doubt they intended to lay siege to Fort Braydon but their siege towers and catapults are just as effective in facing the magical citadel raised in Serra Briante. Some of the soldiers here have faced these siege engines before - the Tower of the North laid siege to

Last time the Jotun laid siege to Serra Briante, they drove the defenders back even with their frigid allies from the Summer realm. This time, however, they are unable to press their advantage. Six weeks after the Summer Solstice, a concerted push by the Imperial forces decisively hammers the Jotun back. At the same time, a second push drives them out of Rojota. Gaining momentum, the armies of the Marches and the Brass Coast, strengthened by heroes and the garrison of the two fortifications, breaks the Jotun advance and drives them west.

The orc armies attempt a stand at Damata, but this time they have no magical citadel of their own. Three days of fighting sees the town and its beautiful walls alike severely damaged, but the Jotun are defeated and forced to retreat. The Imperial armies give them no chance to regroup, hounding them across the hills of Damata and the plains of Gambit until they are driven at last out of Kahraman altogether and back into Reinos.

All told, thanks to the Rivers of Life, the Empire has lost around a thousand soldiers. The orcs are estimated to have lost around the same number of their own warriors. The Strong Reeds ensure that the priests and physicks of both sides are given time to tend to their fallen soldiers. Unlike the Jotun in the north, the southern forces are more suspicious expecting a trap - they cannot fail to be aware of the Navarr present in Kahraman - but for the most part this detente holds.

The Empire holds Kahraman entirely once more. it was a close-run thing. If not for their magic and the great number of independent captains who fought alongside the armies, it is likely that this season of fighting in Kahraman might have ended very differently.

The Empire holds all regions of Kahraman, and has reclaimed the Damatian Cliffs. The white granite quarry will need to be reallocated by the Senate which can be done this season, and will be available for appointment next season.

The town of Damata, and its priceless walls, have been badly damaged in the fighting. The civil service are assessing the damage.

Total victory for the Empire, but reasonably close as these things go. There’s a lot of factors here, and its one of those campaigns where if any one of them was not in place the outcome would have been different.

There’s now likely to be a slight pause in WoW as it’s Wednesday Meeting Time, but I’m hoping to still finish tonight as long as we don’t go on too late.