Hello! I’ll be new to Anvil.

At my first event, I plan to sell (for IC money) a variety of homemade baked goods, sweet and savoury. (My character would be a League merchant with access to exotic herbs and spices and such, which is how I plan to explain it if anyone asks.)

Pricing would be anywhere from 2 - 5 rings, pretty much.

I’d like to get an idea of 1) what people would like to see and would be willing to purchase (I have some set ideas in mind), and 2) if people would prefer a wider variety sold from my tent or a smaller variety sold in a basket as I travel through the nation camps. I’m leaning towards having a tent in the Merchants’ Quarter, hopefully, but I don’t know.

(I’d also be selling rune-card “fortune-telling” readings for a couple of rings, in a theatrical League way. Would people be interested in that?)

I think while you start off you should look at selling a small variety in a basket. You are unlikely to make very much profit if you are just selling from your tent unless you have a prime position such as near one of the main paths.

2 to 5 rings seems very reasonable, most people go for 3 to 5 instead.

I’ve seen cupcakes, brownies, cookies, flapjacks, bags of sweets, fudge and other such things on the field. You could either go for what is popular and try and compete or try and do your own thing. I always recommend having a bit of a gimmick with selling. As a leaguer, you could turn up to a camp, do a quick performance and use it to sell your product. You could look into standing outside conclave, synod or the senate just before people walk in and try and catch people. They will be going into a long boring meeting, they will probably appreciate a bit of sugar.

You could also look into getting a bit of help. Get a few friends, a snazzy name and maybe some business cards and you are looking at something that could become fairly official. Most cake sellers are just a person going round with a basket but if you could be a group with a name that everyone remembers, you might be able to build a reputation a bit faster and then people might come to you.

I think your savoury snacks sound interesting. There aren’t many people selling savoury stuff on the field because of the official food stalls that PD allow to set up, however they usually sell a meal and it is for real money.

In the end, it is up to you. It is about how ambitious you want to be. Ambition is a great thing to show at empire because it is one of the virtues. If people notice that out of nowhere you’ve made a big splash in the food selling business, you may find bit of game coming to you.

Welcome to the forums!

2 to 5 rings is a good range, especially for some tasty savories

Runic fortune telling will likely get quite a bit of interest!

You might be interested in picking up these fortune telling cards called the Journey Deck that were designed for Empire. I know a bunch of Leaguers who are having fun doing readings from this including Cicisbeo’s from Cicisbeo Corner. You can pick them up on the field in Chows who has a few decks left atm.

Savouries are always welcome. (I find there are too many sweet things)

Agreeing on the desire for savouries - you get a fair amount of cakes and biscuits being sold on the field, savoury baked goods are a bit rarer.

As stated above, best thing with starting out is probably to walk around selling. Once you’ve made a bit of a name for yourself (and if you’re selling things others aren’t, then this hopefully won’t be too hard), you can switch to selling from your tent as people will by then want to come find you - this is basically how I did it!

I’ve got a set of Fortune telling/divination/ritual prompt cards that I based on the “Cards of Marseilles” tarot from the BBC version of Johnathan Strange and Mr. Norrell.
I made hand-drawn cards for each of the dramaturgical Personae, Intruments and Thrones (20 in total, if you include the 2 of the Chorus). I use them in a Marcher mummery style, but they’d be very League. They’re just simple drawings, but I like that because I’m playing a wizard, not a pencil artist.

You could also do a set of cards for the runes and use both decks together if you want more prompts. 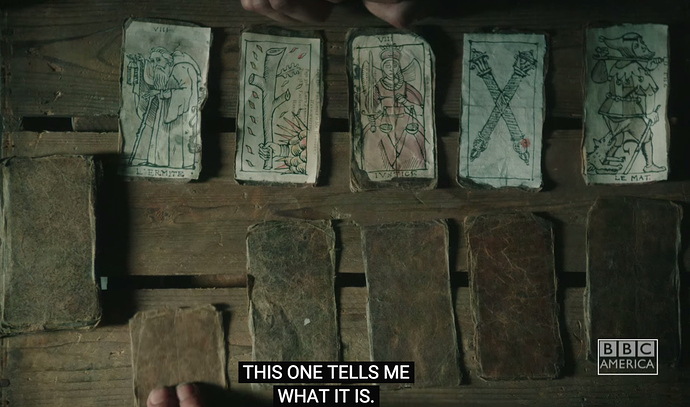 I’ve done a bit of snack-hawking, so here’s what worked for me:

I also second keeping a look out for the Journey deck. I backed the original Kickstarter and have two packs as a result, and they are truly gorgeous!

Thank you for your advice! I was thinking of maybe building one of those large serving boxes with a leather strap that hands around your neck/shoulders, so it has a little more room than a basket, and putting metal tins inside, containing snacks (and other things, like IC paper bags, maybe some snazzy business cards, serving tongs, et cetera) - and then wandering around different camps, selling things and getting some game! (Although I may actually bring a small trundle cart, something I can pull behind me or push in front of me.)

Waiting around before the political meetings sounds like a good idea! I may bring quite a lot with me (I sometimes work at different farmers’ markets during the weekends, and I’m well-used to carrying heavy trays and boxes of food, so no change here!), because my character’s core virtues are Ambition and Prosperity, so I’d like to go just a little overboard (stylishly, obviously). If this works out after quite a few events, I’d quite like to open an IC bakeshop to serve these treats and some cold drinks in summer too!

I really enjoy baking, and I have a few things planned regarding sweet things like brownies, cookies, mini cakes, et cetera, and was interested in seeing what savoury things other people offered. Considering there aren’t as many as I thought, it’ll be a good idea to try and fill that niche!

Things like cheese straws and savoury muffins would be a given, maybe some pretzels and rolls - or maybe some different flavours of savoury popcorn, if I packaged them before the game?

Gosh, those cards are absolutely gorgeous! I was thinking of beginning with designing rune cards on Photoshop, and pulling three for a reading, and then perhaps seguing into the dramaturgy/League performance characters later on if it works out.

Another goal my character has in mind is to tour each of the nation camps, gather different recipes that people would be willing to share, and create an IC cookbook of some sort. I have plenty of recipes of my own, that can be cooked at home or when LARPing/camping, and I think it would be really cool to put different recipes from different nations into one book. Imagine a hearty stew or soup from Wintermark on one page and a lavishly elaborate League dish on the next. Thoughts?

It sounds like you have a good plan, there are too things that I suggest you be wary of though. The first is anvil gets very muddy. You may find that trundle cart gets stuck in the mud. This could mean you have to leave it or you take a lot of time and effort to move it and probably get a bit muddy.

The other thing is that I believe there is already an IC cookbook similar to what you are talking about, I think I heard someone talking about it on here. I recommend checking the library first or see if you can find it with a search on here. Maybe you can team up with who ever is doing it. I do think having an excuse to visit each nation is a good one though so even if someone else is doing it, maybe go along anyway, you could always do a twist like have stories from that nation that could relate to the recipe before the recipe.

I don’t think the existence of a similar cookbook is any good reason not to just do your own anyway. There are multiple newspapers on the field already and people are still starting new ones every year. Competition and doing your own thing because you believe in it is encouraged by The Way.

That was why I suggested looking into it and maybe doing it with a twist.

It’s not hot. It’s this sort of thing.

Huh, that’s different than how I’ve had it.

The Best Way to Grill Corn on the Cob

It's all about the husks.

Thanks for the clarification.

As Geoffrey says, it’s the cold stuff. But you are absolutely allowed to ‘sell’ hot food for IC money (air-quotes because as far as the real world is concerned, IC coin has no monetary value, so you’re effectively giving food away) and people do. It’s OC trading in hot food that’s not allowed because of how PD manages catering at events.

As a seller of savouries in the form of home-made pork pies (“Best pies in Anvil”) I’d love to see more savouries being sold IC. Small hand pasties, samosas, cheesy pastries etc would go down a treat. I charge a crown for a half-pound pie which is a substantial meal in itself or I’ve cut them in quarters at 5r a piece. I usually make 32 pies to sell at the event (as much as I can afford OC) and they’re usually all gone within an hour of starting my sales round so there’s plenty of slack in the market!

I volunteer as tribute