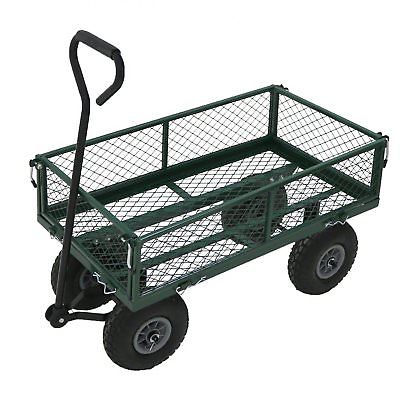 hmm. it will probably be ok if you use some fabric to cover it a bit. the metal cage looks a bit industrial with the green paint and the wheels are a little odd but I don’t think anyone will compare because wheels will be wheels.

yea ill cover the sides with a blanket, and maybe wrap the handle with some leather, i’ve emailed profound decisions just incase too.

Also I note the lack of booze and/or sweet treats in that cart - It’s vitally important to the Empire that it’s filled with cool stuff.

Haha good idea, but you think the cart itself is ok?

What did you want it for?

In most cases unless the weather has been truly horrible, you will be able to drive your car to where you want to pitch your tent, even on the IC field.

After that I’ve rarely had anything I couldn’t hand carry to where it needed to go after time in.

If you’re planning on making a travelling shop / trader of some sort and need to carry alot of wares, then the set dressing to disguise it suggested above would be great.

Otherwise I’m not sure why you would need it?

I’m taking an absurd amount of alcohol to sell

Yep, that sounds like a great use, and they’re pretty robust little trolleys, and fairly easy to pull.

Just drop a blanket/ sheet or burlap sack in it under the bottles.

haha yes absurd i’ve got party packs with a mix of drinks in, ill be going camp to camp, but i’m brass coast camping amongst the navvarr if i miss you.

as a fellow seller of absurd amounts of alcohol i can confirm those carts are amazing and you wont be the only one using one.
2 points though.

1)their really easy to disguise so have at it,
2) Dont loose the pins

oh heres a picture of me dragging mine around on the wiki
https://www.profounddecisions.co.uk/empire-wiki/Steading

Side question, are you allowed to bring OOC drinks to sell?

You can bring drinks to sell but it is likely that you will have to sell them for IC currency. People do a lot of homebrewing and then bring along what they have made. There are also a few bars that are open which take IC coin. I believe they are all player run bars.

What do you mean when you say OOC drinks? Do you mean for OOC money, or drinks in OOC packaging?

I really wouldn’t. There isn’t an explicit rule against OOC packaging IC but it’s generally understood that you should try to avoid stuff like logos and having stuff like coke cans etc. openly in the IC area is a bit… crass?.. when you can pour your drink into a tankard or wrap it in a bit of hessian.

well if the items are used for an IC use then i would say its ok.

i could understand if it was somthing that was not used in the game.

To expand this a bit - wandering around with a cart full of crates of monster, uncovered, hawking them for 2 rings a can - a bit off. You can do better.

Wandering around with a cart full of unidentifiable crates covered in hessian, offering 'Dr Michaeus de Tassato’s Perfect ‘Pothecary Pick-me-up’ at 2 rings a dose, ducking under the hessian and coming up with a goblet (either your own, which you then hang around to retrieve, or the customer’s drinking vessel which they’ve handed you) full of something sweet and potent - you have added colour and story to the game world. You have made it that much richer. You have given other people a chance to role-play they wouldn’t otherwise have.

As with so many things, the difference is in the presentation!