I understand that the greatest priority of battle is to thwack the nearest baddy with whatever weapons you have at your disposal, but the other priority to keep in mind is staying hydrated. What kind of containers do people suggest sticking water in whilst striding around the battlefield?

So, your bog-standard plastic water bottle can be wrapped in a scarf or rag. It can be put in a drawstring cloth bag. It can be put in a fancy leather sleeve, which many traders sell. At a pinch it can be stripped of its label and kept in a pocket or bag and frankly, no one’s going to mind because Hydration Is Important.

Advantage: cheap, easily replaceable, will crunch if you fall on it rather than giving you massive bruises. Hopefully.

Many traders also sell ‘leather’ water-skins, with a plastic bladder inside. Also nice and IC and soft to land on.

My partner has an old Moniac mead bottle (the glass-brick ones with a cork that goes ‘Nyick’) in a stitched leather with a carrying strap. It has gone into battle with him as a physick for many years, but some people are uncomfortable/have opinions about carrying glass on the battlefield. Probably not suitable for a front-line fighter.

I have a Camelbak which I created a cover for (and the tube) and tie it to my back. I find that easier than carrying a water bottle on my waist which can get a bit annoying when I run. 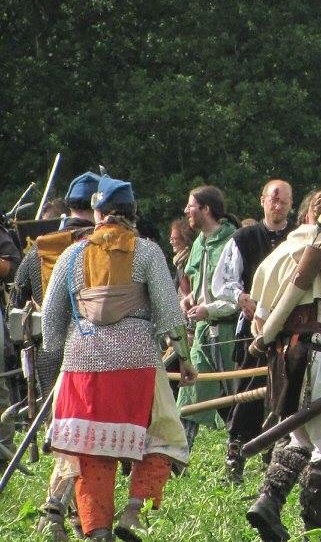 (this image taken before I made the tube cover).

I have one of these water bottles which I carry around pretty much all the time.

On the battlefield, I often carry a leather or canvas bag with three or four 500ml plastic bottles to pass around members of my group/nation.

I have a few of the waterskins that most traders carry. they do the job but sometimes fall foul to being landed on but for value and comfort thats what i go with.

I did find a nice plastic cider bottle that looked like one of the ceramic ones was quite good for a time but it was really heavy when full and got in the way a lot.

I am with the League and play swashbucklers in other systems, so I have a (plastic) wine bottle in a sling from Darkblade [LINK]. I usually carry weak Ribena rather than pure water, pretending it’s wine, but it does just as well filled with water on the battlefield.

Not so apt for non-league, I suppose.

I have one of these water bottles

I have one of those too, and I find the stopper comes out by accident sometimes.

You could probably get away with it easily enough in Brass Coast, Dawn, Highguard, etc. Any of the Southern Europe/Mediterranean inspired nations probably.

Bit of apple juice concentrate in and yours good for Marches, Varuskha and Wintermark as small beer/cider/thin mead.

for ages I used an old plastic scumpy bottle. It looked ceramic (from a distance) was plastic and held loads of water. now I user the standard water skin type things because of ease and availability.