Hello! I attended E2 as my first ever LARP event, and I made a full kit more or less from scratch (sewed shirt, trousers and cape). This is me in my current kit!

Screenshot_54281×752 377 KB
I am excited to come back for E3, but I have since the event realised that I look a bit too Varushkan (and clean…) than I should, given I am supposed to be from Navarr.
I am most likely swapping the cape out for a long dark green jacket, making the bottom frayed and darkened as though it has been exposed to many years of wear and staining.
I also wanted to possibly add strips of the same fabric with darkened ends to the brim of my hat, meant to somewhat resemble dead seagrass or hanging leaves/vines.
I also thought something like a fake lilypad lily would make a nice touch around the band of the hat, but I am worried I am going way off brief here!
Does any of this sound appropriate for a Navarri merrow doing potion brewing and some battle maging, or does it not sound quite right?
I am imagining the whole outfit having some kind of swamp-mage kind of feel. Here is a really terrible drawing of what I am going for. 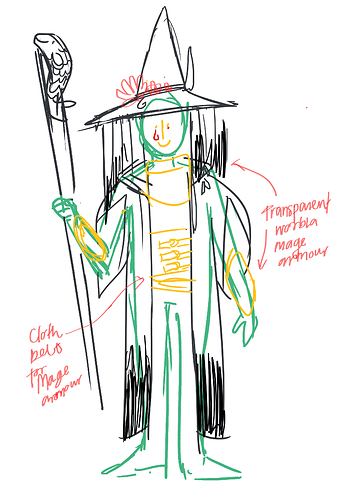 The navarri look is all about practicality and making do with what you can find.

I think the hat sounds like a cool idea, especially if you really layer it with various bits of vegetation. I don’t see why you can’t wear a lily pad on your hat. It isn’t as if it isn’t unrealistic, people have worn all different kinds of plants throughout history. However I feel it should be your noncombat hat. You would use it to protect yourself from the elements but you wouldn’t want to wear it in battle as it could easily come off and things hanging from the hat may get in the way when you are fighting. It is up to you in the end but it feels more like a travel hat then a fighting hat.

With the belts, I think leather belts would fit a little bit better. Cloth belts are a lot more brass coast in style however kit doesn’t have to be exact especially for navarr, it just might help you a bit.

I’m not sure about the transparent worbla. I think unless are very good at shaping it and made it look like crystal, it would look too much like glass or even worse, plastic. Glass feels too industrial from navarr. Things from animals, maybe wood or stone or clay, might fit better.

It might also be a good idea to have some cloth to put over your face. The classic enemy of navarr are the vallorn https://www.profounddecisions.co.uk/empire-wiki/Vallorn and they create a miasma which can cause green lung https://www.profounddecisions.co.uk/empire-wiki/Vallornspawn_husk#Green_Lung. Having face protection doesn’t stop the toxins from getting in but they stop the spores from going into your mouth and nose, slowing down the effects.

When it comes to being a merrow you have to remember that they are quite logical and calculating. It would be good to have an IC reason for you having a certain piece of kit. It is unlikely people will ask you and so you will probably never need to say anything about it but t is still nice to have it, just for yourself. The main thing though is having the trappings https://www.profounddecisions.co.uk/empire-wiki/Merrow#Iconic_trappings.

I hope this helps. There is an unofficial discord server and they have a whole area for talking about kit. Lots of people there make kit for other people so they will know a lot about this kind of stuff. There is also a whole area for navarr so you can talk to other navarri about it.

First of all, your kit looks great, and I love your ideas for developing and improving it. While the trim and edging does pull Varushkan, the colours you’ve chosen and the vine embroidery look great for Navarr.

If you want to move away from looking Varushkan, I’d suggest trying to alter the silhouette of your hat a little, because I tend to associate that pointed witch’s hat with volhovs. The strips hanging from the brim will definitely help, but if possible I’d suggest maybe trying to get the point less erect (the better for moving through wooded areas, of course). Tying a lily to your hat seems like a perfectly on-brief flourish in my opinion.

It seems like you’ve got a pretty cohesive look in mind, and I think the best advice I can give with it is to make sure you stick to a Navarri-feeling palette, which it sounds like you’re already planning on. A Navarri swamp mage sounds fine to me, as long as you don’t conjure images of Kallevesa or Bregasland.

The proposed cut of your jacket looks great for Navarr, and I like the idea of a sort of fringed hem.

I can’t really say about the mage armour, because I don’t know very much about Navarri hearth magic or anything, but as long as you can explain in character why it’s magic and protects you, you should be fine.

Thats some great advice, thank you! I will try stick to leather, and the stuff about the having IC reasons for kit is a good point, I will have a think about it

Also bear in mind that while you may be a rapscallion bog-witch, you ARE visiting your capital city, where you may well run into your teachers, senators, head of state, to say nothing of your peers.

You’ll likely be pretty well dressed for the occasion!

You may well have another outfit you wear for going on quests and battles, which could be less (potent Navarri wizard, don’t you know) and more (bog-witch ya toads!).

Nice job on the sewing so far!

You could make something with heavy wool, or string, or even leather thonging, a loose shawl type thing studded with feathers, dangling little wooden things, that sort of thing.

Actually that sounds like a big to make, so you might do the effect with thin leather and all of the above sewn onto it?

The trick with mage armour is that it shouldn’t look too practical as actual armour. If in doubt, apply enchanted metal inlay (metallic paint) and appropriate runes. I found painting a runic sentence onto my mage armour very IC