Exactly as title suggests. How do Freeborn cambions (or changelings) incorporate horns into their tagelmusts? Are they put on first, with the fabric wrapped around them, or attached over top?

I know a couple of ways. Basically, headbands are your friends! If you can tuck the scarf under a headband it makes it a whole lot easier.

First version, for horns that sweep back and generally keep out of the way - plop the scarf sideways on your head, one side longer than the other. Tuck the scarf under the band and then wrap the longer end around as you normally would, and then tuck the shorter end into the wrapped part at the back/side, or leave it hanging down.

Second, for horns (or in the example, antlers) that stick out from where you’d normally wrap - the same as above, but with a figure 8 around the prongs. This is better with a longer scarf so you can do at least one full 8.

I have recorded a video of both, hopefully it’s of some help. that’s actually really helpful. not sure what form my horns will take yet, so seeing both options is useful

I’ve attempted this a few times, I got a cap. Cut of the front bit and attached the horns.
Add a base layer of fabric over it to cover the cap and begining of horns, (cutting holes for the horns) Then with another scarf do a tight tie.
Not had them fall off in combat yet.

My horns, wig and tagelmust are one thing. And fixed on with a mixture of wig grips and ties to tie it tight around my head. And alot of wishful thinking. But I can afford to not have it 100% secure as I dont take the battle or even walk very fast. 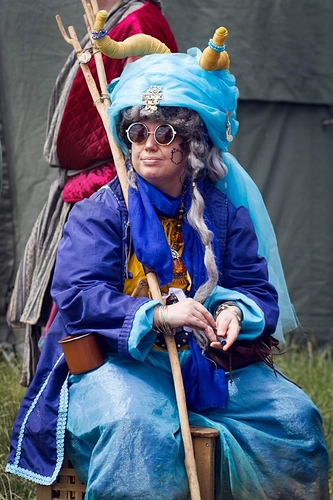