"I know you like pouches, so I made a pouch with a pouch on it"

De-stashing project. A pouch - with another pouch on the front for lammies. I’ve already made a couple of pouches using this pattern (https://www.incolororder.com/…/lined-drawstring-bag…), which I then adapted

To add the exterior pouch, took two pieces the same width as the main pouch, but slightly shorter, sewed them along the top edge, right sides together, then turned them right-side out and pressed the top seam

I then sewed the bottom of this piece between the two exterior main pieces, repeatedly checking that it would be in the right place when I sewed up the sides

Filled with some shredded paper from my daughters craft box, and a drop of 25-year-old patchouli oil I’ve kept from my goth phase in the bottom of my craft box, just to give this bag of phys-rep herbs the right ambiance

If I was doing it again, I’d make the main bag taller, as some of the effect is lost, and, if I was still playing a healer, I’d make another four bags, one for each Empire herb. I also would use much less patchouli oil or something less pungent because my kit bag now smells like Slimelight circa 1994, just as the lights came up at the end of the night. And not in a good way 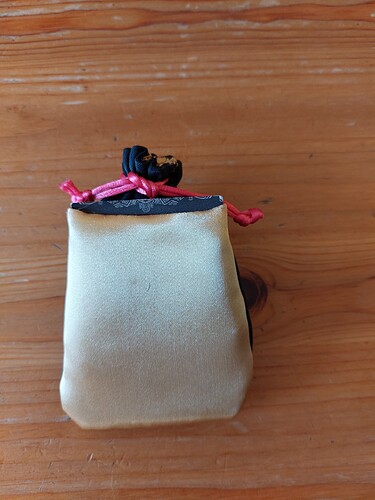