Hi all! I was brushing up on the geography of the Empire using the Wiki, but have come a bit unstuck. The maps and gazetteer are amazing, and I totally appreciate the disclaimer that things change from event to event without necessarily being reflected on the Wiki, but this left me unsure about where certain territories stand within the Empire.

Using information from different pages found all over the Wiki, I created this basic map to hopefully reflect the current war/politics situation with more clarity. I’d appreciate it if anyone could help spot errors! 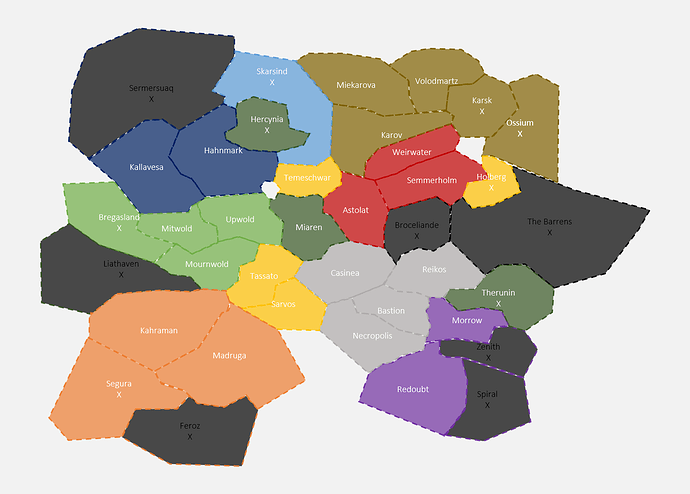 P.S: If this map is way off, it may be because I haven’t been to any events yet and have only had the Wiki to base my understanding of Empire on. Apologies! I started to get hyped for E1 in October last year and am still holding out for my first event!!!

ownership is reasonably accurate… I think Ossium is a bit larger, extending to the east? You could also sketch in Ulnar beyond that, if you like…

Broceliande is special. It’s Navarr, the heart of Navarr, but we’ve never had control of enough of it since the founding of this Empire to have an Imperial Regio or Senator.

Reasonably accurate I think, you’d need to search through the Winds of War for Spiral and Zenith to work out how much of them are still occupied. Spiral should only have a part of it owned by the Grendel due to the treaty signed with them. Ah on reading the Zenith bit, we didn’t manage to get a beachhead, so it’s still under Druj control.

The publicly available info on Ossium is here - https://www.profounddecisions.co.uk/empire-wiki/Ossium but I think the spy network map of it is still only in player hands, it’s not reached the wiki yet.

While I’m sure the Freeborn would disagree, the peace treaty with the Grendel at the last summit means that technically there is no dispute or divide in Feroz at present.

The same treaty means that the Empire holds no regions within Spiral and has no access to the Druj-held parts of the territory that could be contested, so the X marked there is debatably academic.

Otherwise it all looks correct insofar as my OC knowledge goes. The only other addition, as Geoffrey points out, would be an amorphous blob on the eastern border of Ossium, as there is explicitly no map of (the Forest of) Ulnak but that hasn’t stopped the imperial armies who are in the process of “liberating” it right now. 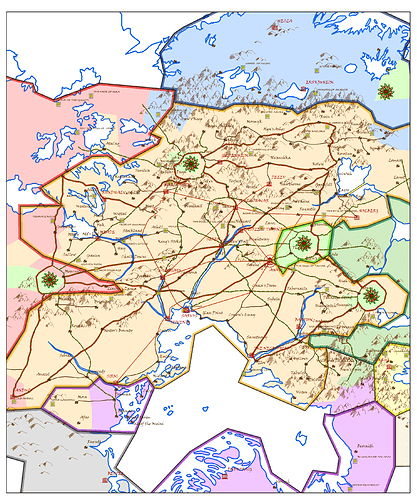 Here’s one I made with what I think the territory breakdown is around the bay of Catazzar.

Yeah, we also have some good maps of the Thule and Grendel territories…